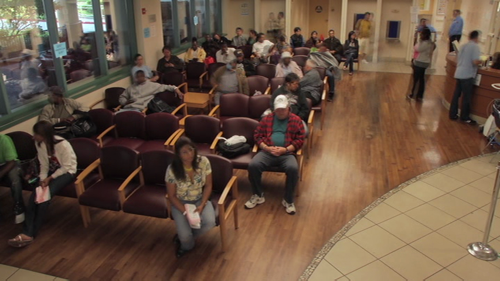 In America's hospital emergency rooms, patients wait for an average of four hours and seven minutes to be seen. The 2012 documentary The Waiting Room provides enough shots of people waiting around to prove that tidbit correct. More importantly, the film is a devastating and heartbreaking glimpse into our damaged healthcare system.

Chronicling a 24-hour cycle on the Emergency Room floor at an Oakland, California hospital, The Waiting Room tells its story in an unadorned, surprisingly non-judgmental way. Director Peter Nicks approaches the subject with thankfully few gimmicks - just a few instances of time-lapse photography and musical scoring intrude in what is otherwise a bracingly real, contemplative film. Acclaimed upon its release on the documentary circuit and its broadcast on PBS's Independent Lens, Docurama Films' nicely packaged DVD edition supplies a little more context and comes recommended.

When we picture hospital emergency rooms, often it's the adrenaline-filled E.R. version of harried yet gorgeous orderlies rushing to save the gunshot victim. The Waiting Room reveals a place infinitely more mundane, yet just as compelling. As we get to know a few of the patients waiting (and waiting) to be seen at Oakland's Highland Hospital, the real function of the E.R. emerges. Sure, a few true emergency cases come in, but mostly the area serves as a refuge and last stop for the uninsured, mostly non-white group of people known as the working poor.

During the course of shooting The Waiting Room (contrary to appearances, it was actually shot over a period of six weeks), director Nicks weaved together a sympathetic portrait of both the E.R.'s patients and their overworked caregivers. A few characters stand out - the ebullient nurse in pink eyeglasses who logs incoming patients in, the weary carpet-layer who resents his declining health getting in the way of his work, a young, uninsured couple who got rejected for surgery to remove the man's tumor after a long, expensive testing process, a frightened little girl with a 103-degree fever and swollen glands, a doctor attempting to release a drug addict to a safe, caring place, an upset man needing kidney dialysis. Though some patients are in the E.R. due to something they brought on themselves (gang violence or drug abuse), most are honest, hard-working folks just trying to get through the hospital's bureaucratic morass with their dignity intact. The film doesn't editorialize. With a subtle touch, it prompts the viewer to question what kind of society keeps its lower classes in a never-ending cycle of being sick, uneducated and poor.

As fly-on-the-wall documentary filmmaking, The Waiting Room works. Where it truly excels, however, is as a subtle commentary on the U.S. healthcare system. The film reveals just enough of these peoples' stories for us as viewers to empathize, yet keeps it concise enough for us to see the troubling bigger picture implied here. 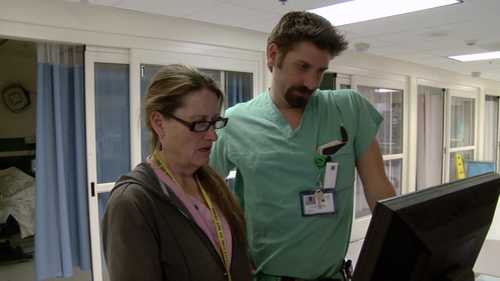 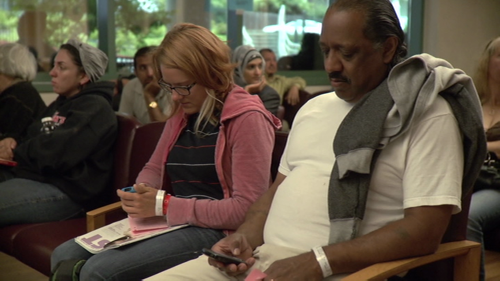 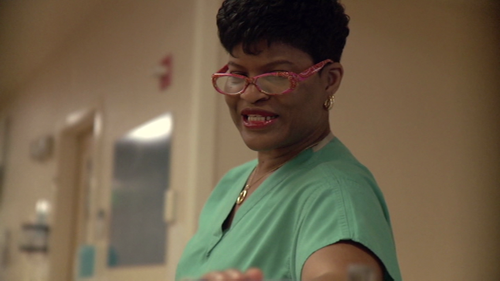 The Waiting Room was shot in a standard 16:9 format with digital cameras well-equipped in capturing texture and detail. For a film shot mostly in fluorescent-lit interiors, the photography has a warmth which deals with skin tones especially well. Docurama's DVD edition presents the film with good mastering and a crisp, detailed picture with good light and dark levels.

The Dolby Digital stereo soundtrack used with The Waiting Room is a good, clean sounding mix with clear dialogue. The film was largely shot in echo-filled interior spaces where ambient sounds (like medical equipment) come in a little too loud, but given the circumstances the final mix sounds agreeable. No subtitles or alternate audio are provided.

As with many of Docurama's releases, a good amount of bonus stuff is included. 24 minutes' worth of Deleted Scenes supply some more background material on the people seen in the film. Highlighting the online component of this endeavor, Storytelling Project is a series of eight short advertisements which also use outtake footage from the film. An Audio Commentary with director Peter Nicks is included, as well. Although Nicks remains silent during a few passages, he provides a lot of interesting background info.

When it comes to the Great American Healthcare Debate, the 2012 documentary The Waiting Room probably won't convert anyone. For this viewer, director Peter Nicks' cinéma-vérité vignettes of an average day in a big-city hospital's E.R. served as a heartbreaking reminder that our healthcare system is broken. There's also a lot of hope and resilience in the people seen passing through this film, however, both in the lobby and behind the counter. Recommended. 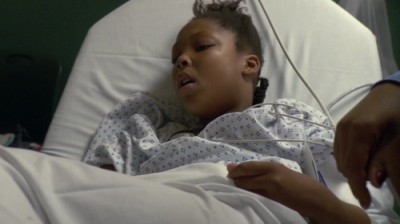 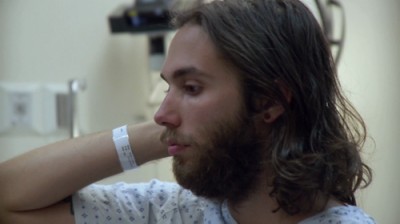