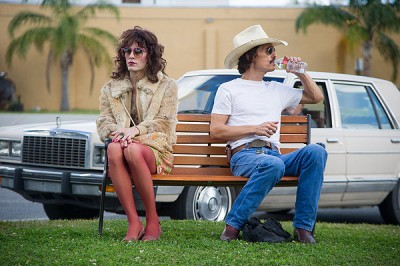 Matthew McConaughey turns his usual playboy persona on its head in the heart-rending drama Dallas Buyers Club. He plays Ron Woodroof, a Texas party boy who works as an electrician out on the oil fields. In 1985, Woodroof was diagnosed with HIV and given thirty days to live. As best he could guess, he contracted the virus from unprotected sex with a woman who used intravenous drugs. Though a cokehead and a boozer, he didn't use needles himself, and given that he was a complete homophobe, there was no way he would have gotten it from another man.

Facing death, Woodroof started to take life seriously. At a time when AZT was only just starting to be tested, any medical recourse was out of reach. It wasn't until he met a doctor in Mexico who believed in alternative treatments that Woodroof found a way to save his own life--using vitamins and proteins not connected to Big Pharmaceutical and thus not approved by the FDA. Seeing a way to make a buck, Woodroof started smuggling the drugs across international borders. In order to get around certain legal hitches, he formed a "Buyers Club." Patients wouldn't buy the meds directly, they'd purchase a membership in the club. The drugs came as a free perk.

Dallas Buyers Club basically follows Woodroof's fights with the FDA and the resulting personal growth that came from adopting a cause and learning to take care of himself. It's based on a true story, and directed with a straightforward style by Jean-Marc Valleé (The Young Victoria). The script by Craig Borten and Melisa Wallack (Meet Bill) manages the drama nicely, injecting humor to take the edge off. McConaughey levies his charm to make the bigoted crusader likable, even when he says some terrible things. Essential to the transformation are the people who he surrounds himself with, including a sympathetic doctor (Jennifer Garner) and a fellow patient, Rayon (Jared Leto), a drag queen who opens doors and helps Woodroof find customers. 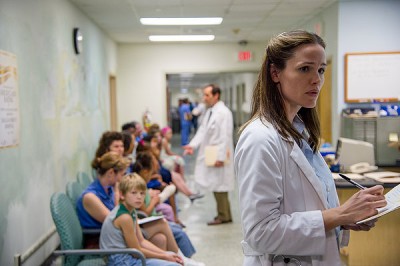 Both McConaughey and Leto commit 100% to their roles. The actors shed pounds to look appropriately ill during their characters' lower moments. Leto is nearly unrecognizable in wig and make-up. He plays Rayon smartly, not giving over to stereotypes, leading to some of Dallas Buyers Club's more heartbreaking moments. Sentimentality creeps into the film's final third, but certain emotions are inevitable in a story of this kind. They never feel false or calculated.

Valleé and cameraman Yves Belangér (Laurence Anyways) shoot Dallas Buyers Club with a minimum of glitz, letting the earthy tones of the Texas decor match the dour mood of the subject matter. Period details look authentic without being overplayed. The film shows various different communities, and there is cohesion to each one. Actors appear to have been cast to fit the unit, so that they really do look like they belong together. McConaughey then serves as the chameleon, adapting to each. A common humanity is the greatest link between disparate people, while ignoring or indulging inhumanity is the downfall of others.

There is definitely some heavy stuff going on throughout Dallas Buyers Club, but the film also has a lot of charm and a lot of heart. Valleé and crew deftly avoid the pitfalls of biopics and message movies, telling a previously unheard story in a way that is both moving and entertaining. It'll certainly be one to bet on come awards season, and here's hoping Dallas Buyers Club finds a supportive audience leading up to then. 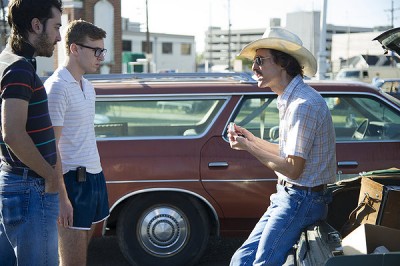