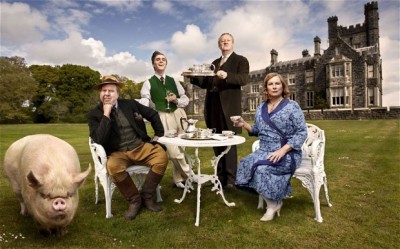 When one thinks of P.G. Wodehouse, one thinks of witty stories that gently mock the foibles of the idle English rich of the early 20th century. In the early '90s, Stephen Fry and Hugh Laurie famously headlined what might be the quintessential television adaptation of Wodehouse, Jeeves and Wooster, a series which brings to mind adjectives like "intelligent" and "effervescent." The new BBC series Blandings, inspired by Wodehouse's stories, opens with a gag about a farting pig. One can imagine, in that moment, one of the producers of the show shouting at the audience, "This ain't your daddy's Wodehouse!" The rest of that first episode remains on shaky comedic ground, but the show improves quickly (more on that in the episode breakdown below).

Blandings stars Timothy Spall (of numerous Mike Leigh and Harry Potter movies) as Clarence Threepwood, Lord Emsworth and the jolly, slightly dotty patriarch of Blandings Castle. He lives with his overbearing sister, Lady Constance (Absolutely Fabulous's Jennifer Saunders), who is constantly annoyed by her brother's slobbiness. Lord Emsworth's son Freddy (Jack Farthing) is a more hopeless variation on Bertie Wooster, always dropping by the castle to mooch money off his father, having already blown his allowance and then some on gambling and women. Mark Williams (Ron's dad in the Harry Potter movies) plays the soused butler Beach, who acts as Lord Emsworth's chief ally and conspirator within the house.

It's a perfectly charming, if not shockingly original, set-up for a series, and the cast is more than game to pull it off. It's a bit of a pity then that writer Guy Andrews and director Paul Seed, both Brit TV vets, never seem to nail a consistent tone from episode to episode. Sometimes Lord Emsworth is portrayed as stubborn and sly and sometimes he is shown to be a complete moron. Sometimes Lady Constance is a two-dimensional scold who hen-pecks her brother with little provocation and sometimes she is a fully realized lady, whose frustration is understandable considering the brick walls of silliness her brother lays in her path. Sometimes the show is tasteful enough to imply a dog is humping a character's leg offscreen, and sometimes it's crass enough to show a character in extreme close-up with his face hovering over a pile of pig poo. 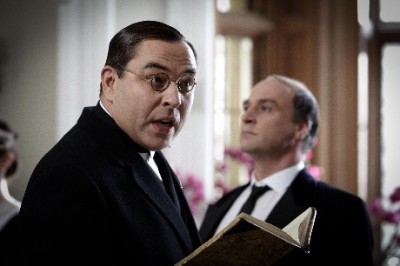 Episode 1: "Pig-Hoo-o-o-o-ey" - As I said before, the first episode of the series is easily the weakest. Lord Emsworth's pig-caretaker has been jailed for 2 weeks, and his sow, The Empress, has quit eating. Unfortunately, the Fattest Pig Competition is impending and the Empress must be at her top weight. Lady Connie, meanwhile, is trying to get one of her nieces to marry a Lord, but she wants to marry a cowboy. When it turns out the cowboy knows a pig call that will make the Empress eat, Lord Emsworth sides with his niece and frustrates that old stick-in-the-mud Constance.

That's already a lot for a half-hour, and I haven't even mentioned Freddy's part in the episode. The whole thing feels overly busy and over-plotted, never letting us settle and enjoy the interactions. It's all played a bit too broad as well, favoring slapstick and stereotypes over something dryer. It doesn't help either, that the constant, frantic, pseudo-Jazz Age musical score by Paul Honey is designed to turn the Wacky Quotient up to eleven at every turn. Saunders, who can be wiltingly caustic, is completely squandered in this episode.

Episode 2: "The Go Getter" - On the heels of that spectacle, the second episode is, oddly enough, the strongest of the series. It's not nearly as busy plotwise, and while it does climax with another fart gag, the focus here is more on funny, barbed banter. Also, that frickin' wacky music has been dialed down to about a six from here on out.

In "The Go Getter," Lady Constance, as she so often does, tries to maintain the illusion of class and dignity within the walls of the castle, because she has invited some guests she wants to impress. She even hires her brother a fastidious personal secretary named Baxter (a perfect David Walliams from Little Britain) to organize his cluttered office and cluttered life; Lord Emsworth, of course, hates this. Meanwhile, Freddy tries to woo a woman working for his aunt by becoming a dog food salesman (long story).

Episode 3: "Lord Emsworth and the Girlfriend" - This episode originally aired fifth in the series, according to Wikipedia and IMDB, but for some reason it is included third here. A pair of poor children are being put up in the castle, as part of a charity event, at the same time that Constance is prepping the annual Blandings Fete. Meanwhile, Freddy tries to woo the children's teacher... because Freddy is always wooing somebody. A pretty good episode that lands somewhere between the overwrought hijinks of the first episode and the cleverer approach of the second, with the children making nice chums for Lord Emsworth and Beach, while the Scottish gardener battles with the pig when it starts damaging his topiary work.

Episode 4: "Company For Gertrude" - Another niece wants to marry beneath her station, and Constance won't allow it. Freddy decides to introduce the young man, a parson, under a made-up identity, hoping the family will be won over by his personality and allow the marriage. Unfortunately, the parson is an utter klutz who keeps injuring the man he is trying to impress. Freddy has also married a burlesque dancer he believes is Portuguese, but who is obviously just speaking gibberish and might be robbing the castle. A pretty fun episode overall, but the best moment comes when the parson claims to have worked in Brazil, and Constance asks him to translate what Freddy's Portuguese wife has been saying. They speak gibberish back and forth to each other, and no one is the wiser.

Episode 5: "The Crime Wave At Blandings" - Lord Emsworth's BB gun-toting grandson is visiting the castle and David Walliams's Baxter has been rehired. It doesn't take too much imagination to foresee that Baxter is going to get BBs shot at his butt. Meanwhile, Freddy tries to butter up the sister of a vicious gangster with whom he has lost a bet... but she's more fascinating by Beach the butler. Not the strongest episode storywise, but the cast is utterly charming in it.

Episode 6: "Problems With Drink" - This is probably the most frustrating episode in the batch, because it has a number of laugh-out-loud moments, yet the somewhat unbelievable story of the episode is predicated on our main character Lord Emsworth not just being charmingly and obliviously self-involved, as usual, but suddenly being horrifyingly stupid. Jessica Hynes (co-creator of the awesome Simon Pegg sitcom Spaced) appears as a bankrupt, gold-digging dowager who plans to convince Lord Emsworth to marry her and then force out Beach, Constance, and Freddy. They naturally refuse to take it lying down.

The Video:
The show's six episodes are presented on 2 DVD-5s, with just three 30-minute episodes on each disc. It seems odd then that the 1.77:1 image looks so compressed. The average consumer might not necessarily notice, because it sort of resembles a digital broadcast or an average Youtube video, but for a home video presentation, this is way too artifact-y and blocky. If you get caught up in the show, it is ignorable to a certain degree. The color reproduction is nice overall, although sometimes the blacks feel more washed-out than they probably should.

The Audio:
The English 2.0 sounds fine. Nothing elaborate, but the dialogue is always clear and never gets drowned-out by that fake old-timey jazz. There are English SDH subtitles.

Special Features:
None. Some previews for other BBC shows put out by Acorn play when you pop in the disc. 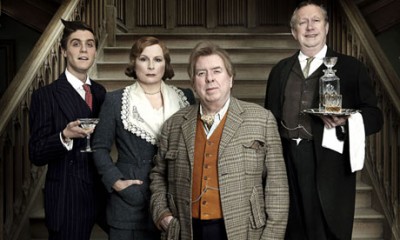 Final Thoughts:
While not as thoroughly delightful of a Wodehouse adaptation as the Jeeves and Wooster show from the '90s, Blandings offers a number of amusing performances and more than a handful of both highbrow and lowbrow laughs. The home video presentation leaves something to be desired and might not even be a visual improvement on the version of the show Acorn has posted on Youtube. For that reason, I suggest you Rent It.