Puppy in My Pocket: Friendship Ceremony 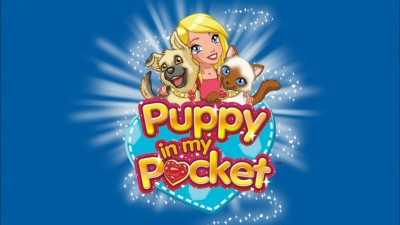 
The Show
My 7-year-old daughter will watch just about anything with a puppy on or in it. The fact that she actually owns some ...in My Pocket toys, along with the fact that this series is titled Puppy in My Pocket made it a sure thing that she would be interested. Thus, she was pretty excited when we sat down to watch this set, which, thankfully represents the first seven episodes in the show (unlike most kids DVDs, which are best-of collections.) That interest was maintained throughout most of the disc's 80 minutes, but there was more than one point where she questioned what she was watching and why the stories were so short. When she ran and got her Puppy in my Pocket books, it was curious. I asked her what she was doing, and she said she was looking for the characters, because she didn't remember it being like this.

Part of the problem is the source material. The ...in My Pocket universe started in the toy world, with several series of tiny toys, including a line of dogs. The whole purpose of the line was to sell tiny toy animals small enough to fit in a child's pocket. That's not exactly a compelling plot for a cartoon. It's certainly less engaging than, say, warring clans of morphing robots or specialized soldiers tasked with defending the free world. So in transferring the idea to cartoon (and books and such) the story became focused on Princess Ava (a cat, in a show about puppies) who, from some other-dimensional realm, helps grant the wishes of lonely children by matching them with pets who will be their best friends.

Any drama comes in the form of the princess' evil sister Eva, and her henchmen, a pair of dopey dogs and a crow. Through their machinations, Ava is sent to the human world, and is replaced by Katie, a young girl who Ava had intended to match with Magic, a friendly German Shepherd puppy. Together, armed with half the gem Ava used to send puppies to the human world (Eva has the other half) they attempt to bring Ava back and continue the work of pairing puppies with humans. However, we rarely hear anything about Ava outside of some brief peeks at her terrible time in the human world. It's as if once every other episode someone on the writing staff remembers the character even exists.

The show maintains a very linear story, with each of the first six episodes representing just part of the overall story, without much of any self-contained story (the seventh represent more of a story-per-episode pace.) If you lack any real sense of logic (which includes most younger viewers) this is just another fluffy animal tale, but if you start to think about it at all, everything falls apart. If this place is about pairing pets with humans, why are there decidedly un-pet animals like beavers and crows hanging around? It seems like pets to be paired have collars. Why do the evil animals have spiked collars? For that matter, why are there collars on birds and dolphins? Why do Katie's clothes change between dimensions? Why can't she learn to keep a hold of the gem that allows her to communicate with the animals? Why is the pets' land called Pocketville when nothing on this show has anything to do with pockets.

Beyond any of those questions is the question of what was going on when it came to translating this show to English? An Italian production, it has experienced some issues when making the trip across the ocean, with any dialogue between more than two characters crashing violently, making it hard to understand at points, a point my daughter took issue with on more than one occasion. Then there's the matter of the accents. The location of the show isn't quite clear, but Katie and her father speak English with an american accent, while her mother is apparently British. Then there's another girl and her mother who are from Tuscany, and who also have British accents. I can accept varying (but mostly British) accents from the supernatural talking pets, under the well-established Smurfs principle, but when you combine the accents with the issues with conversation, it seems like some lazy voice efforts. 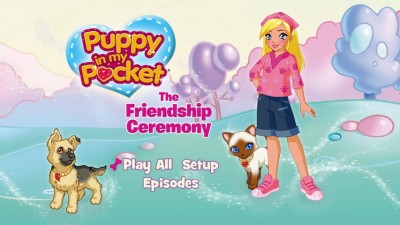 The DVD
The first seven episodes of Puppy in my Pocket is delivered on a DVD, which is packed in a standard-width white keepcase, with slipcover that repeats the cover art. The DVD has a simple, static anamorphic widescreen menu with an option to choose episodes, play all or adjust languages. There are no audio options, but subtitles are available in English.

The Quality
The anamorphic transfers on these episodes are bright and colorful, capturing the look of the show quite well. The quality of the animation varies throughout, sometimes appearing a bit flat, while featuring some nice detail at other times, and the level of fine detail was a positive when it was given something to work with. Black levels are solid when apparent (which is not often) and there are no obvious issues with compression artifacts or any other digital concerns. Overall, a nice job.

The Dolby Digital 2.0 tracks are clear and center-balanced, and have appropriate heft for the tone of the series, especially when that earworm of a theme song kicks in. There's nothing dynamic here, nor is there anything to really be concerned about, outside of the weird over-talking. 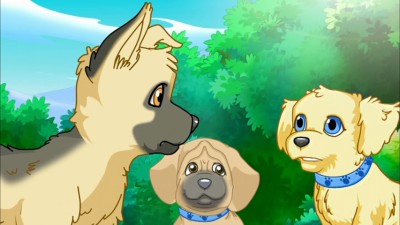 The Bottom Line
There's a great deal about Puppy in my Pocket, starting with the mostly meaningless title and continuing on from there, that makes it a bad show, but as my daughter is fascinated with dogs, she's willing to overlook the flaws, even when she recognizes that they exist. Me…not so much. The DVD looks and sounds fine, but offers no extras, so it shouldn't even be a second or third option, unless your kid is a complete ...in my Pocket fanatic.