Having written a few movies including the well-received Juno and not-so-well-received Jennifer's Body, Diablo Cody makes her directorial debut with Paradise. Julianne Hough plays Lamb, who narrates most of the film. She has had a very religious upbringing in a small town, where everyone has a strict code of conduct. Over video footage of her singing a religious song at a church talent show, she tells us "This was considered edgy." She has spent about a year recovering from a plane crash in which she was "barbequed in jet fuel," and ended up with a good cash settlement. (Although she escaped with her face undamaged, she has many other burns which are rendered here by long-time makeup artist Greg Nicotero.) As the movie starts she is just about to make a presentation at her church about the experience- everyone there expects her to tell them how her faith in God was re-affirmed through the whole thing (and it's implied that she's also supposed to donate her cash settlement to the church) but she shocks the congregation by instead giving some gory details about the pain she went through and saying "no benevolent being would do that to one of his children- There is no God!" Before she's dragged off the stage, she goes on to say that she believes in science, not God, as it was the medical care that got her through, and that she now plans to visit Las Vegas "to gamble, drink alcohol and frolic with homosexuals," in other words do everything that she's been told all her life not to do. 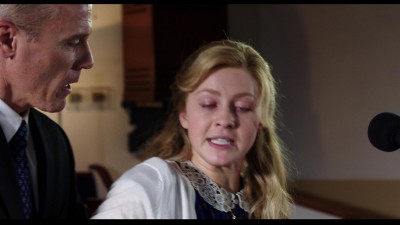 I was hoping at this point for a little more debate with Lamb and the churchgoers, but Paradise then cuts to her landing in "Satan's Playground," where most of the movie takes place. She checks into a hotel and heads for the nearest bar, where William (Russell Brand) happens to be bartending and chats her up as she's awkwardly enjoying her first drink. Singer Loray (Octavia Spencer), William's friend, then joins the conversation after she's just been booed off the stage. Both William and Loray become a bit concerned for Lamb's safety when they hear her plans, but Loray especially is afraid that William will try to take advantage of her so she offers to drive her to the places she thinks she'll enjoy. She explains a little-known fact (which is true, as I looked it up) that the "strip" area of Las Vegas is actually a "census-designated area" called Paradise, hence the movie's title. She thinks Lamb will enjoy the real Las Vegas much more. Their first stop is a bar frequented more by locals than tourists, where William catches up to them and tags along. They then go through Lamb's written list of "sins" that she wants to commit, such as smoking, getting a tattoo and looking at a dirty magazine (things don't get TOO far out of hand since the movie is rated PG-13.)

Through all of this, Lamb learns a few things about the world outside her upbringing, including many misconceptions. While her behavior is a bit uneven in that in some moments she's out to break all the rules and others she feels vulnerable, I think it's likely that someone in real life in that situation might act that way. Julianne Hough conveys just the right amount of naivety through all of it, though it's clear she wants to break out of her shell. One element that I did find a bit too movie-conventional was how she managed to make two new friends within her first hour in a new town. That's a criticism I've had of many films, as in my experience it usually takes several days if not weeks to really get acquainted with someone. Still, there are plenty of laughs as well as reflective moments. 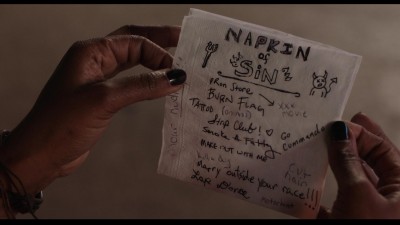 Paradise was shot digitally with Alexa cameras and for the most part looks like film without the film grain. Aspect ratio is 1.85, and the picture is nicely detailed with almost everything onscreen in sharp focus, with bright colors. Having never been to Las Vegas myself, it sure looks nice here.

Audio is in 5.1 DTS-HD Master Audio and is a decent mix for a movie of this type- most sound stays up front but there are a couple creative uses of the surrounds with them providing a bit of ambient sound the rest of the time. Rachel Portman provides a rather whimsical music score. 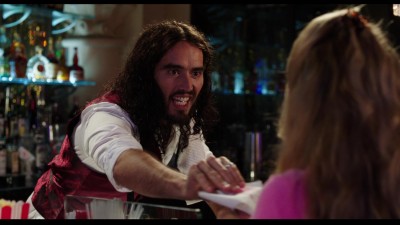 Diablo Cody provides an audio commentary which is rather entertaining in itself. She gives several interesting details including how she didn't imagine Russell Brand in the movie but gave him the part after he read the script and wanted to be in it. She also reveals that many interior shots were actually done in New Orleans, though most of the outdoor scenes are definitely Las Vegas. There are also clips with Diablo Cody and the main cast members giving their thoughts on the movie, along with its theatrical trailer. The disc opens with previews for Goats, Last Love and The Numbers Station, each of which must be chapter-skipped through before you can start the movie. 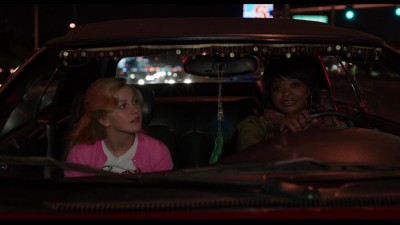 I found Paradise just a bit uneven, but enjoyable for the most part. Given how offended some religious people get when their faiths are questioned, I always like to see movies address this although here it pulls back far too soon. While the Las Vegas trip could have easily been played quite differently with a stronger MPAA rating, Paradise retains just the right amount of sweetness by keeping it PG-13.