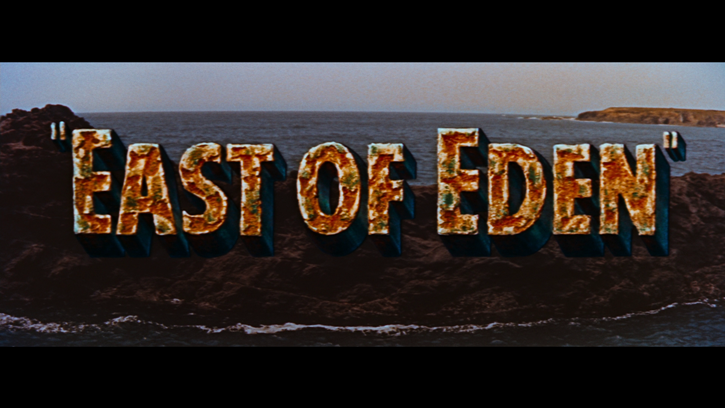 East of Eden is based upon the acclaimed novel written by John Steinbeck. It was adapted for the screen by Paul Osborn. This production of the book was a gigantic undertaking for its makers, both in terms of what the director and studio brought to the production. Warner Bros helped make East of Eden one of the first films to be made in CinemaScope, a technology meant to pioneer widescreen filmmaking.

Directed by acclaimed filmmaker Elia Kazan (On the Waterfront, A Streetcar Named Desire) and introducing the young James Dean to the film-going public this is one of the greatest of Kazan's accomplishments, who was at his absolute best with this masterpiece.  He helped to bring forth Dean's electrifying performance, which to this day still stand's as one of the best debut performances by an actor in a feature film.

Dean actually got his start in small bit-parts on television programs before landing the big role in East of Eden, which catapulted his career quickly and helped to make him a star. This role is the launching pad that led him to getting the roles in Rebel Without a Cause and Giant that would so closely follow. It was also the only film of the three he made that Dean was able to see complete prior to release.

I've never actually read the East of Eden novel, though I am fond of Steinbeck. The film version by Kazan, as adapted by Osborn, is supposedly only loosely based upon the second half of the book, so those who love the novel might find some issues with this film. Yet I find this story mesmerizing and profound. 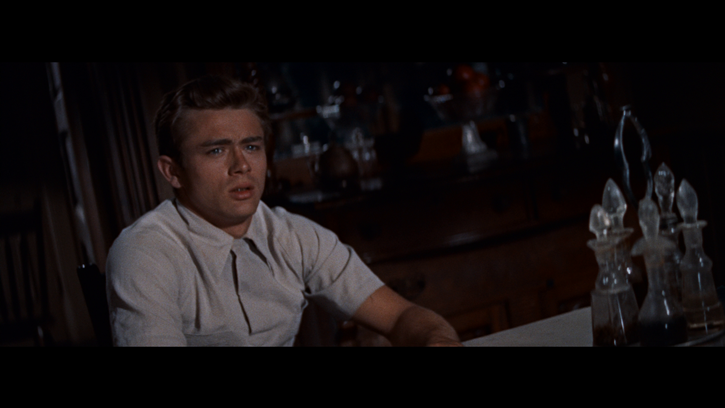 It is at least partially a narrative retelling of Cain and Abel. The storyline in East of Eden focuses primarily upon Cal (James Dean), who feels that his love for his father is being rejected and that his father, Adam ((Raymond Massey) cares more for his other son Aron (Richard Davalos).  His father is a highly religious man and Cal feels that he cannot live up to his father's idealism. As the storyline progresses, Aron is in a relationship with Abra (Julie Harris) that Cal is jealous about as he has feelings for his brother's girlfriend. Abra, who at first seems to dislike Cal, eventually grows to feel attracted to him.

Abra and Cal begin to spend some time together and they ultimately connect over the feelings they have felt under their upbringing. Abra sees the disappointment and pain Cal feels in not pleasing his father, and in feeling a lack of love. Abra tells Cal about how her own father had given her gifts of great monetary value, but was not there for her and that it made her feel she wasn't loved. This scene, set by the backdrop a beautiful field of golden flowers, is one of the most affecting and profound of the film.

At the start of the story, Cal believed his mother to be dead. Later in the story he discovers she actually is still alive but that his father had been telling Cal and Aron otherwise for all of their years without her. He seeks finding his mother, and when he succeeds he meets Kate (Jo Van Fleet),  who Cal discovers runs a brothel. Kate seems to connect to the fact Cal feels rejected from Adam. Cal, still desperate for his father's affection, asks to borrow money from Kate in hoping to sell beans during a war-time shortage so that he can repay his father for ice that he destroyed, belonging to his father. Reluctantly, Kate agrees to loan Cal the money to get this started. Jo Van Fleet won the Academy Award for Best Supporting Actress. Her performance demonstrated the icily cold character of Kate, who Cal fails to realize never looked for him or Aron during all of their years apart. 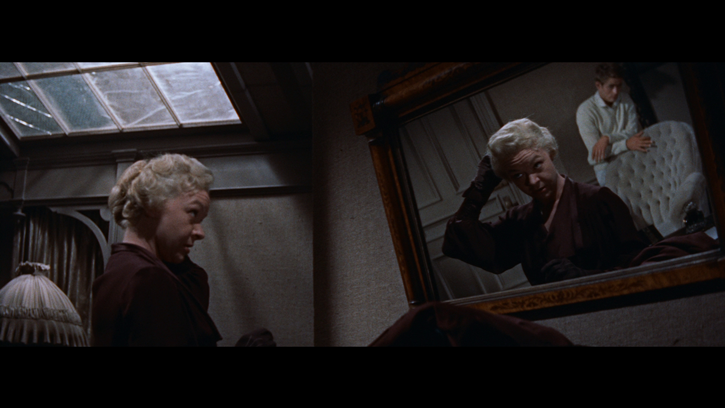 The conclusion of the film is one that unfolds with brilliant pacing and some of Kazan's most impressive framing of the characters. One of the things I appreciate about East of Eden, after how wonderful the performances are, is the nightmarish fervor that Kazan creates with tilted camera angles and bizarre framing that most director's would ignore. This makes the descent Cal's feeling emotional seem to be represented through the ebb and flow of the camera.

Most director's would simply ignore or underestimate the sheer importance of this technique, but Kazan makes a grand cinematic gesture with some of the most fascinating shots in film history. In one of the best moments demonstrating this technique, Cal swings back and forth on an outdoor swing while talking with his father. As Cal pulls towards and away from the camera, which is titled slightly, and bleakly composed with cinematography by Ted McCord, the scene becomes more and more heightened and, frankly, scary to behold. It brings the story to a closer emotional core as viewers can identify with the confusion and distraught feelings that Cal goes through.

East of Eden is a genuine American classic.  When you think of films with great performances this is a film that easily comes to mind. Dean is so fantastic and so unafraid to be emotionally resonant, that it's shocking to recognize it as a film debut. The supporting performance are so powerful as well, especially the supporting part by Julie Harris, which is so distinct when it's compared to her other performances. I love East of Eden -- it's one of the first films that was influential on my growing love of cinema and  the power of filmmaking. It is a fine work of accomplished art that is worth cherishing and remembering for all of its immense worth and contribution towards the craft of filmmaking. It is magnifique. 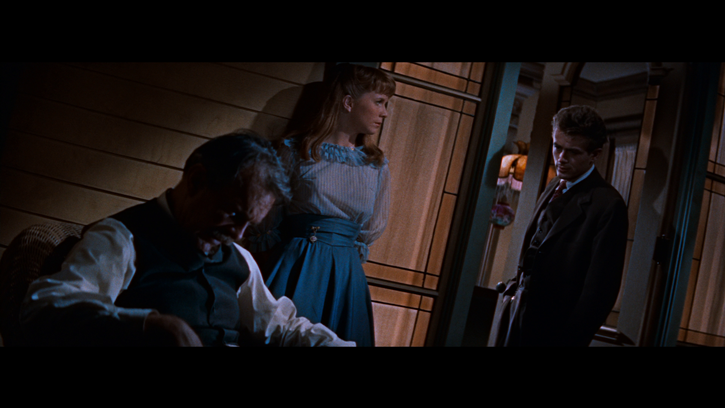 There's something majestic about the color in East of Eden. Above and beyond every other aesthetic quality of this film, that's easily the thing that stand out to me the most. Especially getting to view the canvas of the Salinas valley and the beautiful blooming flowers with the richness of color that one often hopes for but rarely gets to discover with such cinematically splendid fervor. I was utterly enchanted by this element of the film, which was director Elia Kazan's first color film.  This Blu-ray wonderfully presents that color with the new 4K scan elevating the presentation to new heights.

The 1080p MPEG-4 AVC encoded transfer of East of Eden is a strong one indeed. The image retains adequate grain and there is a real sense of richness in the texture of the photography. I certainly find this to be a beautiful film, one with a complex visual quality that is astonishing, largely due to the stylistic choices of Kazan and cinematographer Ted McCord. The original theatrical aspect ratio of 2.55:1 has been preserved. The scope ratio effectively helps Kazan create a larger sense of the 'mood'  in many of the scenes, especially when he makes things topsy-turvy during the story's darker moments.

Despite the fact that I find East of Eden to be a beautiful film, I am not particularly fond of the CinemaScope technology as demonstrated with this film. I appreciate the wider canvas which resulted from the technology, yet the way the image became stretched at times because of the technology was a distraction. The technology which was still in its infancy. This is something that impacts my experience to a small degree. However, I try to remember that it's a limitation resulting from what was possible when the film was made and I encourage other viewers to be considerate of this aspect of the production as well.

The CinemaScope format  is no fault of the transfer, which preserves the film as accurately as possible. This is one of the first films to use the widescreen technology of the time and in that regard it should be considered a pioneering effort. However, I find the use of CinemaScope in East of Eden to be disappointing in comparison to how Rebel Without a Cause implemented it and only shortly thereafter.

The image is full of depth and clarity. The new scan and restoration does wonders for this film. East of Eden has always been a beautiful film with lush photography and with a genuinely great attention to detail.  The new transfer has no ailments that can result from digital tinkering and it presents the source with a proper layer of film grain.

The only real issue with the film is that the scene-change dissolves have some weak detail due to the source limitations. This is not a fault of Warner Bros or the restoration team at MPI, but it's nonetheless something that has a impact on the visual finesse of the presentation. This minor drawback aside, East of Eden looks stellar in an authentic and well-realized Blu-ray transfer which dramatically demonstrates the importance of film restoration and 4K scanning when preserving films.

East of Eden has received the least impressive sound presentation out of the three films on the James Dean: Ultimate Collector's Edition. That's not to say it's a terrible presentation, by any means. There certainly is good fidelity and dynamic range to the source material. Yet when it comes to authenticity I felt this presentation was a minor disappointment.

Unfortunately, the re-mixed 5.1 DTS-HD Master audio sounded a bit unnatural to me at times. Take, for instance, the sequence involving the falling blocks of ice as ruined by an outraged Cal. This scene was particularly troublesome to me as it sounded like an inauthentic expansion to 5.1 surround. The way the sound materials were utilized in this moment (and to a lesser degree some other parts of the film) made it a slightly less enveloping experience. I found it a bit distracting to my viewing.

Overall, most viewers (listeners?) are unlikely to be bothered much by this mix as it is still generally front-heavy. However, I really wish that the original audio had been provided. I  absolutely feel as though the original mono sound mix would provide a better experience.

Dialogue clarity is good. The music score by Leonard Rosenman sounds beautiful: haunting when it needs to be but also uplifting when the story and performances are in need of some emotional grace. 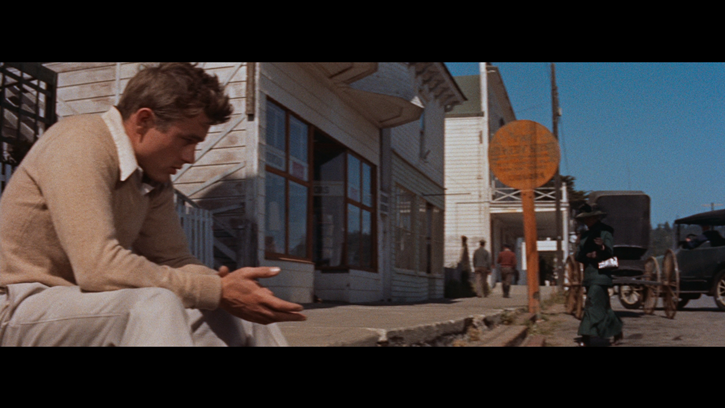 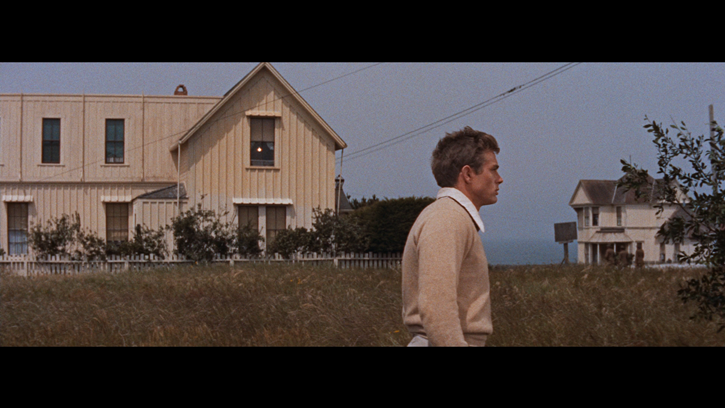 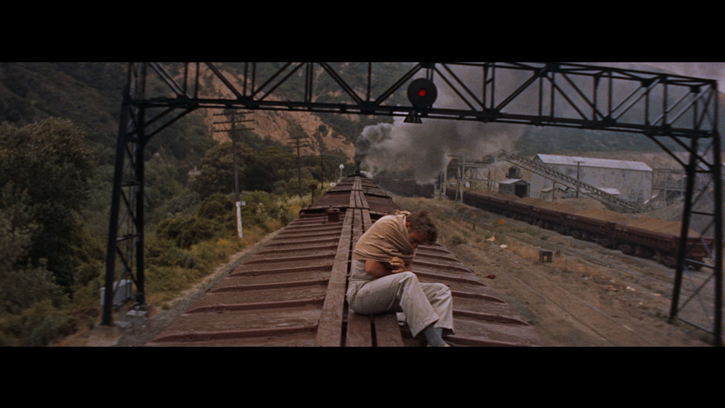 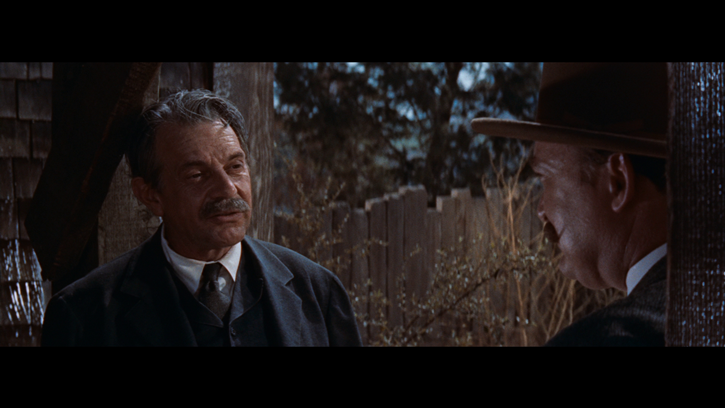 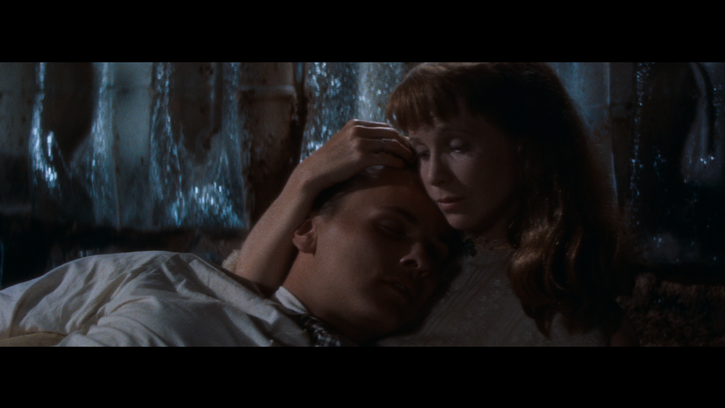 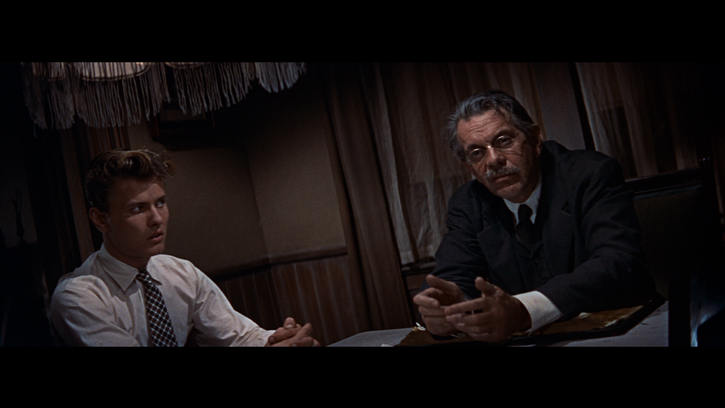 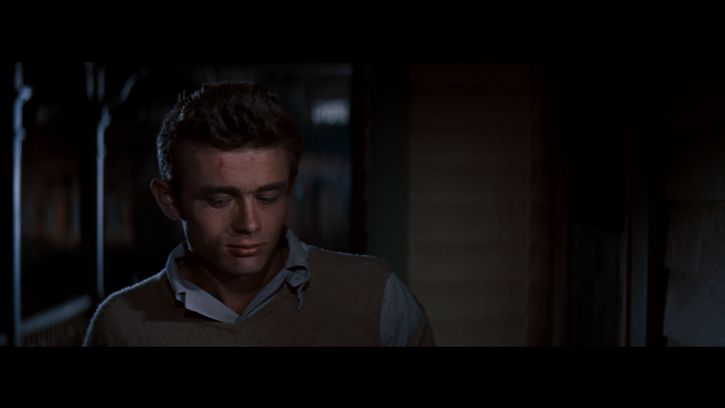 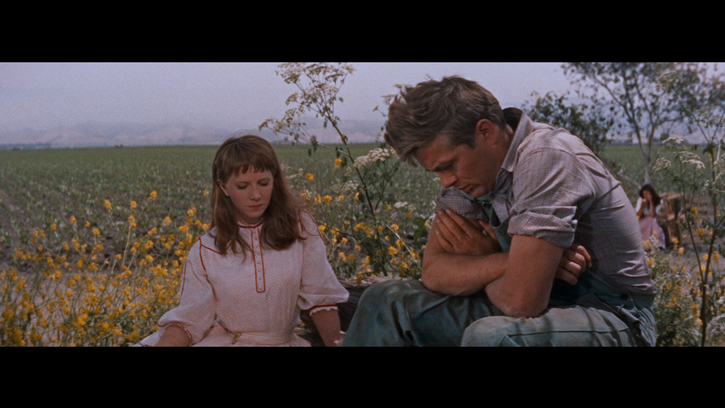 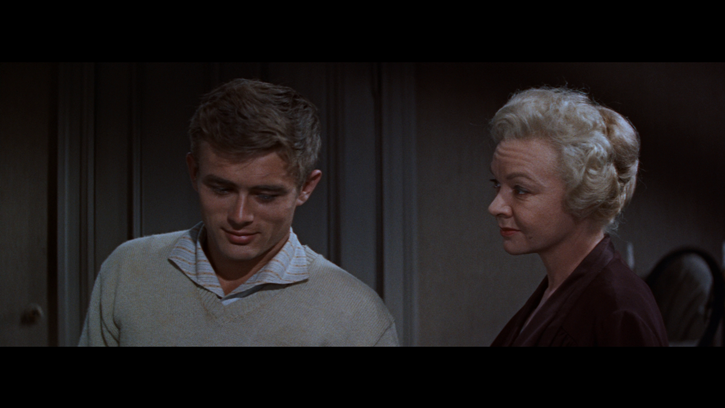 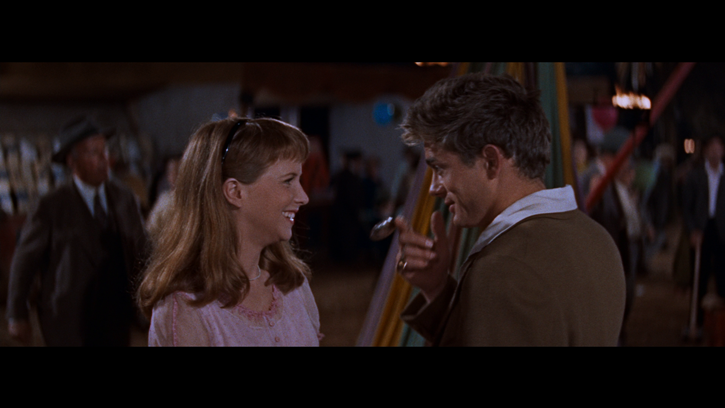 All of the supplements from the 2005 2-Disc DVD Special Edition have been ported over for the Blu-ray edition of East of Eden, including:

East of Eden: Art in Search of Life (20 Min.) is a documentary with interviews with various individuals who were involved with the making of East of Eden.

There are also a number of shorter supplements, including: Screen Tests (6 min.), Wardrobe Tests (23 min.), Deleted Scenes (19 min.), and the 3/9/55 NYC Premiere (14 min.) which featured appearances by novelist Steinbeck, director Kazan, and others. 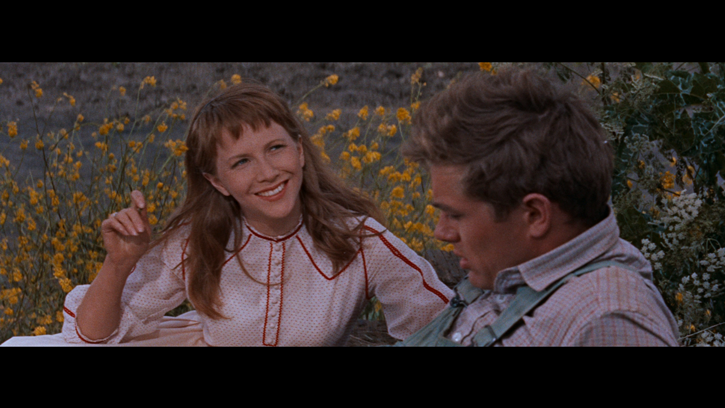 
It is so marvelous to finally have this classic Elia Kazan film in 1080p High Definition. Despite the technical limitations of early CinemaScope filming East of Eden is a marvelous film to experience. The cinematography and the colors look tremendous in the presentation MPI have created in restoring the film. James Dean is fantastic in this first big-screen performance. This essential film has never been presented better on home media and this release is an essential purchase for fans of classic cinema at its finest.