Disney // G // November 5, 2013
List Price: $36.99 [Buy now and save at Amazon]
Review by Stuart Galbraith IV | posted November 18, 2013 | E-mail the Author
Like finding a lump of coal in one's Christmas stocking, I was terribly disappointed on many levels watching Winnie the Pooh - A Very Merry Pooh Year (2002) a faux 64-minute feature in fact derived from a half-hour 1991 television special with new, direct-to-video material to pad out the running time. The presentation is emblematic of Disney's crass exploitation of its premium assets. The bastardized program is badly and cheaply done, and doesn't follow the spirit of the three original, charming theatrical featurettes of the '60s and ‘70s. Meanwhile, the Blu-ray is criminally overpriced for what it is, offering an extremely unimpressive video/audio presentation of the material, with "extra features" of absolutely zero interest, even for undemanding small children.

My six-year-old loved The Many Adventures of Winnie the Pooh (1977), the careful compilation film of the three earlier shorts; and Winnie the Pooh, the lovely 2011 film that recaptured much of the original shorts' charms. But even she was thoroughly bored with almost all of Winnie the Pooh - A Very Merry Pooh Year. When it was over and I asked her what she thought of it, she just looked at me and shrugged.

Disney frankly has a lot of nerve charging SRP $36.99 for what's essentially an upconverted TV show expanded to an hour with supplements less nutritious than marzipan. The simultaneously released Mickey's Christmas Carol at least comes with a big bag of one-reel cartoons, newly converted to high-def and which all look terrific. This, on the other hand, is by far the feeblest Disney Blu-ray I've seen so far, one that would have been overpriced at $12.99, let alone nearly three times that. Let me say up front: you'll want to Skip It. 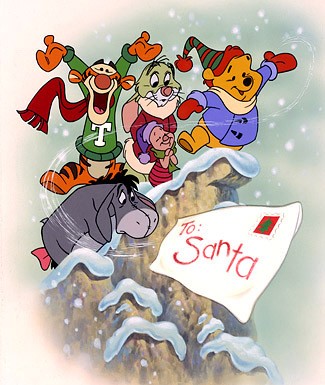 Admittedly, some of my disappointments stems from wrongly assuming this had been a theatrically released film, not a hybrid fusing of made-for-television and direct-to-video material. But, even unaware, I gradually figured this out watching the show because it's so terribly obvious. The Winnie the Pooh and Christmas Too TV special material, from 1991, stylistically does not match the direct-to-video padding produced for the A Very Merry Pooh Year sequences at all. And, unlike the episodic but otherwise seamless blending of the three two-reel cartoons for The Many Adventures of Winnie the Pooh, here the older material is very awkwardly and unimaginatively inserted, making the deception all the more obvious.

In the Hundred Acre Wood, Christopher Robin's stuffed animal friends gather at Pooh's house to celebrate Christmas. The misbegotten writing of the show is apparent from the very first scenes. In previous Winnie the Pooh films, Pooh's house, a hollowed-out tree trunk, is in keeping with A.A. Milne's original, simpler concepts, but here Pooh's home is positively cavernous, overstuffed with furniture and holiday decorations. There's a massive walk-in closet crammed with apparently full honeypots, belying Pooh's usual characterization of constantly running out of the sweet stuff and relying on others to feed him. Also in the house is an enormous Christmas tree, meaning that Pooh has found room for a giant tree within the tree he resides. This might have been made acceptable had Pooh struggled to get the thing in his house, or if it didn't quite fit, bending at the top with branches poking out through windows and such, but in the movie it fits just fine.

The animals recall the time Christmas almost didn't happen, and the action abruptly shifts to the older TV special. In that story, Christopher Robin writes a letter to Santa on behalf of his friends, who ask Kris Kringle for various presents: a snowshoe for Tigger's tail, an umbrella for Eeyore, a fly-swatter for Rabbit, etc. Only after the letter is sent, carried on a northerly wind, does everyone realize that Pooh forgot to ask for anything for himself, and so he and Piglet chase after it, eventually finding it. They resend the letter with Pooh's additions, but a southerly wind only carries the letter to Pooh's front door.

Concerned that now no one will get anything from Santa, Pooh crudely fabricates the presents everyone wants and on Christmas Eve, disguised as Santa Claus, visits his animal pals.

Back to the newer, direct-to-video footage where, after Christmas, the characters prepare to celebrate the coming year by making New Year's resolutions. Listening to the constantly-complaining Rabbit and wanting to please him, Pooh, Piglet, Eeyore, and Tigger all resolve to change their bad habits: Pooh gives up honey, Piglet promises not to be so skittish and fearful, Eeyore vows to be more cheerful, and Tigger swears off hopping. What results is something out of a brain-swap comedy: Eeyore grins maniacally and acts like Pooh, Piglet becomes insufferably boisterous like Tigger, etc. (Owl, strangely, is absent from both shows.)

What's especially depressing about the script is that it unimaginatively and very badly recycles the plot of Winnie the Pooh and Tigger Too (1974), in which Rabbit likewise shames Tigger into giving up bouncing. Couldn't writer Brian Hohlfield have come up with something new? (He's not the only one: in the Christmas Too scenes, Pooh makes like an altruistic Grinch, tying "antlers" to the top of Piglet's head, selfishly making him pull the sleigh, like the hapless mutt in Dr. Seuss's story.) As with the tree-within-the-tree business, another plot point Hohfield doesn't seem to have thought through is the appearance of busy honeybees in the snow-covered Hundred Acre Wood. Didn't he realize that without flowers to pollinate and temperatures below 57 degrees honeybees huddle in their hives until spring?

Disney's Winnie-the-Pooh adaptations have always struggled maintaining the gentle spirit of A.A. Milne's original stories. The more recent Winnie the Pooh movie, for instance, has a bit too much slapstick for its own good but more than compensates for that in other ways. Here, however, especially in the newer, Very Merry Pooh Year bits, the characters don't much resemble even the original Disney versions, let alone Milne. It's almost disturbing, for instance, to see Eeyore walking about on his hind legs, grinning like a madman, and even when they're "normal" the characters are much too busy acting out broad slapstick instead of being thoughtful extensions of Christopher Robin's imagination.

Winnie the Pooh - A Very Merry Pooh Year is presented in 1.33:1 standard format, in a lackluster transfer that looks upconverted from a standard-def source. Everything about it is clumsy: the long segment from the earlier TV special includes pointless fade-out/fade-ins to where the commercial slots had originally been. The colors are often a bit off; in one scene Tigger's tracks in the white snow are, unaccountably, pink, and the animation is rather slapdash by Disney standards. Some of the cels look like they were photographed incorrectly, as a few shots are actually out-of-focus and, in one scene, the animation is unnaturally jerky. Even the Dolby Digital Stereo is disappointing, with some dialogue "bleeding" into the surround speakers and there are other perceptible imperfections. At least the disc is region-free and includes English, French, and Spanish subtitles.

Remember when Disney used to list the image pressed onto its DVD discs as an "extra feature?" Here four "Pooh-rific Bonus Goodies" are listed. Pooh is right. Besides the usual "Disney Intermission" feature, the unmemorable songs have been corralled into a "Disney Song Selection"/"Sing Along with the Movie" option. Feh. And, finally, there's an "Enhanced Environment" feature, basically nothing more than a drab screen-saver. Given the choice, I'd wager an overwhelming majority of consumers (and their children) would much rather have a half-hour of HD one-reel cartoons, as was done with Mickey's Christmas Carol.

A mediocre TV special turned even worse direct-to-video title, poorly presented with no worthwhile extra features. Give this one a miss.