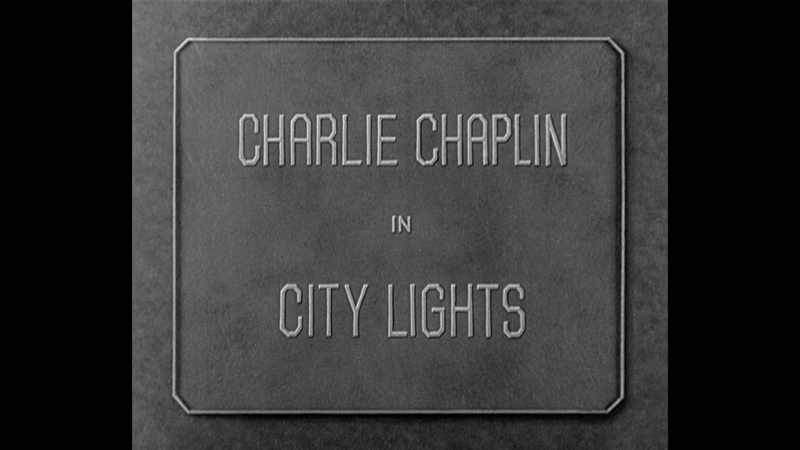 
The Movie
In approaching my review of City Lights, I got a weird train of thought in my head. Could I possibly write something about this film that would make a difference? We're talking about a movie that's now over 80 years old, that sits at number 11 on the AFI top 100 films of all time, and which is pretty much universally considered one of the greatest comedies ever. Whatever I say will just be tossed onto the pile of film criticism the movie has encouraged, and will not affect this unimpeachable classic. And though I am an admitted contrarian at times, I wouldn't set out to slag a film just because others love it. In watching City Lights yet again for this review, the appeal of Charlie Chaplin's classic character of the tramp, with his iconic look, remains undeniable. But I just can't gush over this film the way others do. While the work of Harold Lloyd is personally preferable, I don't even consider City Lights, Chaplin's personal favorite, to be his own best, with Modern Times and The Great Dictator higher on my chart.

This film is another tale of the Tramp (Chaplin), a lovable scamp making him way through the world, when he meets a lovely young lady selling flowers on the street. He soon finds out this woman is blind, while she determines, through a bit of mistaken identity, that he is a rich gentleman who could solve all her problems. Meanwhile, the Tramp meets a real millionaire suffering from a drunken depression, saving him from a bad decision and becoming his best friend in the process...at least while the rich guy is drunk. These two relationships built around false pretenses make up the bulk of the film, and power it toward an ending that is utter fantasy yet grounded is heart-felt emotion, making it an impressive blend of comedy and romance, especially when expressed without dialogue (an interesting element in and of itself, as Chaplin refused to give in to the idea of the talkie, which had already gained dominance years earlier). 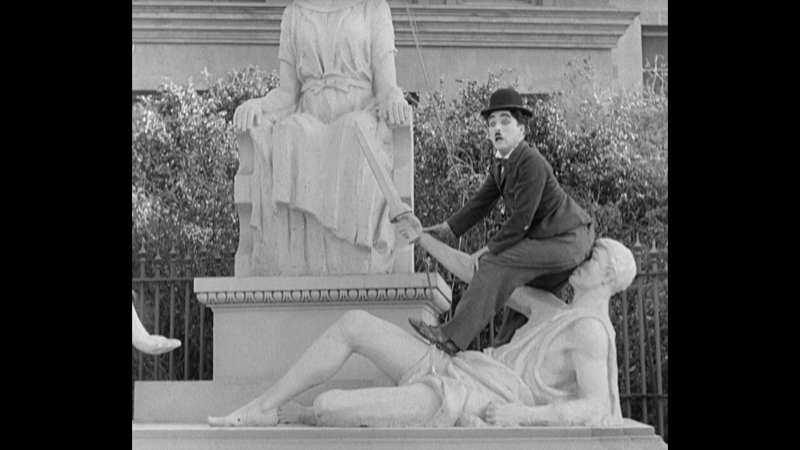 As interesting as the blossoming love between the Tramp and the Flower Girl is, with her misplaced hopes and his attempts to mislead her, and the subversive elements of the character, expressed in ways like his homoerotic behaviors in the face of more aggressive characters, the reason you're here is his inventive comedy. There's any number of memorable moments, including a dark, wet effort to prevent a suicide, a raucous party that sees him swallow a toy whistle, a calamitous night out involving spaghetti and cigars, and the film's biggest scene, a boxing match and all the craziness that goes on in and out of the ring.

Chaplin's slapstick abilities are at their peak, whether he's walking a figurative tightrope on the edge of a chasm or perilously hanging from a sword, but he balances that with the tender scenes between the Tramp and the Flower Girl (though even these are often undercut by a gag.) That the Tramp has a genuine sense of self-respect only makes the gags he falls victim to all the more entertaining. It may be simple, but a simple cup of water brings big laughs when his dignity is washed away.

Though Chaplin notoriously labored over his set pieces, planning, evolving and perfecting them with an obsessive eye for detail, when compared with the work of Lloyd, the bits in this film have more of a spontaneous energy, which is good and bad, as Lloyd's are more complex and well-constructed, but Chaplin is more in the moment. At the same time, Chaplin frequently seems to be padding out his "business." For instance, in the boxing scene, he repeats bits of the performance practically move by move, which takes away from the artistry, especially when put smack up against better, more interesting parts, like the brilliant use of the ring bell. Perhaps the interplay of the comic and serious, but City Lights feels like it drags a bit at points (the Tramp's efforts to earn money through legitimate work being one slow portion in particular.) Fortunately, the rest of the funny stuff is more than enough to make up for it. Chaplin's skill as a filmmaker is equally impressive, as the movie features advanced techniques and an eye for style well ahead of his contemporaries. 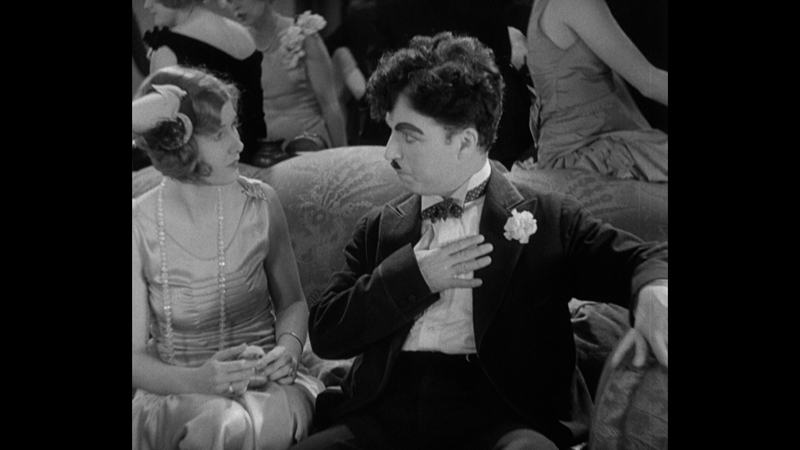 The Disc
City Lights arrives as one of Criterion's first dual-format releases, with a Blu-Ray disc and DVD in Criterion's standard clear Blu-ray-height keepcase with an attractive two-sided cover and a 41-page booklet that's simply, yet appropriately designed. The discs are overlapped on two hubs on the right side of the case. The traditionally beautiful Criterion menu gives the choice to watch the film, navigate the timeline, select scenes, adjust the set-up and check out the special features. There are no audio options, while there are no subtitles or closed captioning (naturally.) What's nice about the release is the bonus features are the same no matter which format you're watching, so no one is left out.

The Quality
Delivered in a 1080p, AVC-encoded 1.19:1 transfer (with pillar-boxing), the film looks very nice (not Carnival of Souls-good, but what is?) with appropriate sharpness and a fine level of detail and solid black levels that carry the film's darker scenes. Overall, everything looks good, but you wouldn't describe it as perfect, as some flicker and some very minor scratches are still present in the image. There are no notable issues with digital distractions though, making for another quality Criterion release.

The PCM 1.0 audio manages the trick of sounding like an old-school audio track like one you'd expect for silent film from the early 20th Century, while being clean and clear of issues with audio defects. The music and sound effects all enjoy quality strength and clarity. This is as good as this film is going to sound.

The Extras
A new feature-length audio commentary by Chaplin author Jeffrey Vance gets the bonus features started, and it's a very academic affair, featuring plenty of references and quotes in its pin-straight structure. Among the areas covered are Chaplin's personal and professional life (including his anger), the production of the film and themes explored in the movie. Often he'll describe what's happening on-screen, like he's narrating, before providing further detail. It can come off a bit dry, but it's loaded with info about Chaplin and the movie.

A 2003 entry from the Chaplin Today series, focused on City Lights (26:47) offers a wonderful appreciation for the film, as Aardman Animation co-founder Peter Lord breaks down several key scenes, sharing his thoughts and theories about silent films and Chaplin's craft. It makes a nice complement to "Chaplin Studios: Creative Freedom by Design" (16:!3) which features effects expert Craig Barron discussing Chaplin's unique filmmaking process, including his on-location efforts, the sets created at his independent studio and his use of special effects, via behind the scenes footage and Barron's own materials (similar to the info he provided for Criterion's release of Safety Last!.) Though City Lights is the focus, Barron pulls examples from several other Chaplin productions, making for a well-rounded examination of the man's work.

"From the Set of City Lights" is a set of four clips, running a total of 18:37, that feature either behind-the-scenes material or a deleted scene. There's footage of Chaplin shooting the first key scene in the film, with commentary by historian Hooman Mehran, which shows how hard the Tramp could be to work with and an audio-free deleted scene (7:25) of the Tramp messing with a stick stuck in a grate and a window-dresser stuck behind glass, which easily could have remained in the finished film. Some rehearsal footage of a set-up that's different from what made it into the movie (1:24) and a costume test (1:14) of Chaplin for a moment that was cut from the movie. You don't see a lot of this kind of content for films from the ‘30s, so their inclusion is certainly welcome.

Two entries look at Chaplin's connection to boxing, which is a big part of City Lights. First is a 9:21 excerpt from The Champion, a boxing match from an older film that shows a few early versions of gags that returned in this movie. Not only can you compare the fighting, you can see how Chaplin's film technique improved as well. Then there's "Boxing Stars Visit the Studio" (4:39), which sees Chaplin play-fight with a pair of real pugilists. Again, this lets you see Chaplin trying out some of the moves you see in the movie (and just goofing off.)

Rounding out the on-disc extras is a reel of trailers for the film (8:46) from the U.S., France and Germany. The voiceover for the German trailer, which basically walks you through the entire plot, is so very German it's hysterical.

In addition to details about the release, the thick, starkly-designed booklet includes "The Immortal Tramp," an essay on Chaplin's character, focusing on City Lights by biographer Gary Giddins, and "Chaplin's Anatomy of Comedy," which is reprinted from a 1967 issue of Life Magazine. While Giddins' piece is in-depth and informative, the Life piece is invaluable, as the thoughts are coming directly from Chaplin and cover a wide swath of film and life, from his theories on comedy and his work with Marlon Brando to his general distaste for movie stars. It's a must-read for anyone into movies.

Though Criterion has added in some excellent new bonus features, a few from Warner Brothers' long out-of-print DVD release have not been carried over, including the intro from biographer David Robinson, the oft-mentioned screentest with Georgia Hale, Winston Churchill's set visit, a brief newsreel interview with Chaplin, a home movie of Chaplin and his brother in Bali and the still photo and poster galleries. This is pretty interesting material, so its exclusion is disappointing. 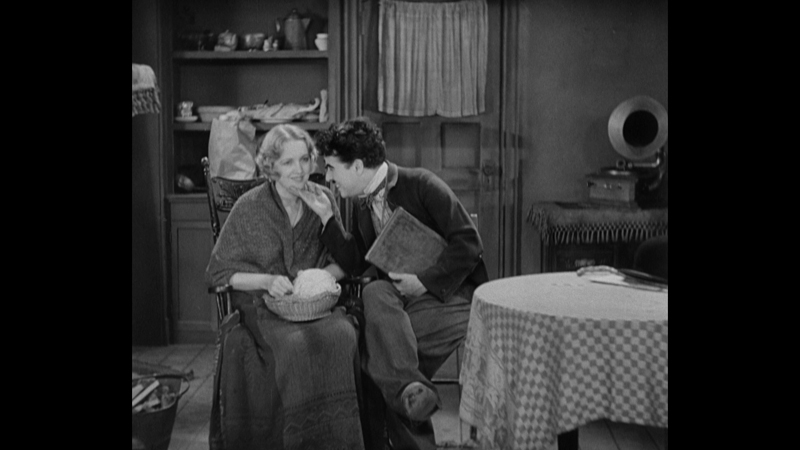 The Bottom Line
Chaplin's mastery of silent comedy is on full display in City Lights, which blends his light-hearted brand of physical comedy with some darkness and emotion, but due to several factors it's not as enjoyable as some other touchstones of the era, even amongst Chaplin's work. Criterion has done their usual top-notch job though, delivering excellent quality and a healthy dose of extras, putting this film into context for newcomers and cineastes alike. Though personally I enjoy other silent films more, having another classic in the collection is only a good thing.