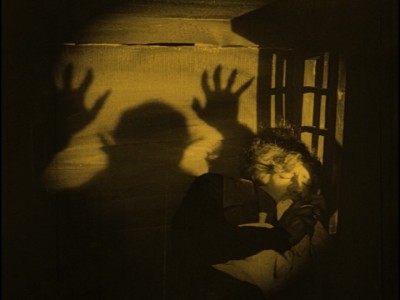 Amid pop culture's current fascination with vampires - young vampires, hot vampires, sexy vampires, young, hot AND sexy vampires - it's easy to forget that there was a time when the subject made for genuine creeps and not some cynical marketing ploy. Nosferatu, the unauthorized 1922 adaptation of Bram Stoker's Dracula overseen by the legendary silent director F. W. Murnau (Sunrise), cast the die on how our favorite nocturnal bloodsuckers were done on film. Although Kino Classics' latest edition of the German chiller doesn't add anything new over their previous DVD release, the set confirms that (all these decades later) Murnau's unique re-imagining of the vampire legend remains unsettling, potent and weird.

Much of what makes Nosferatu such a delightfully skewed vision lies in how Murnau and screenwriter Henrik Galeen tweaked the Stoker book to avoid getting accused of plagiarism (a tact that didn't work out, apparently). These tweaks introduced many of the conventions that we normally assume were in Stoker's novel (the vampire's aversion to sunlight, for example), along with other ideas that have an shudder-inducing eeriness of their own (the notion that vampirism can be spread like a plague, which carries on in current-day zombie pics like World War Z). While the story often sticks to hoary melodramatic conventions of the day, its riskiness and sheer Germanic weirdness make it a startlingly modern film.

Nosferatu keeps Dracula's gothic 19th-century European setting, moving it back from 1890s Britain to 1830s Germany. Aside from streamlining the story and changing the characters' names, however, the story follows that familiar "regular guy meets vampire, gets bitten" arc. Here we have a young man named Thomas Hutter (Gustav von Wangenheim), who has been alerted by his boss, Herr Knock (Alexander Granach), to a wealthy client who has an interest in purchasing property in their town of Wisborg. Knock wants Hutter to go to the client's estate to talk over the purchase details with the wealthy man, who lives in far-off Transylvania and is so eccentric that the neighbors fear the very mention of his name. Thus, against the wishes of his fretful wife Ellen (Greta Schöder) and the many locals he encounters, he journeys to the Romanian castle belonging to the Dracula stand-in, Count Orlok (Max Schreck). Upon meeting the tall, ghostly Orlok, Hutter begins to suspect that he's the legendary Nosferatu, "Bird of Death" who gradually spreads his psychosis-inducing evil onto victims a la the Black Death. By the time Hutter takes off for home, however, Orlok is already one step ahead of him - placing Hutter, Ellen, Knock and an entire ship's crew in mortal danger. "Beware that his shadow does not engulf you like a daemonic nightmare," indeed.

Like many early silents, Nosferatu has the appearance of being clumsy and antiquated, yet in fact it's a decidedly forward-looking film. A lot of the techniques Murnau uses here serve as a sort of Directing 101 for horror: 1. Use shadows to heighten tension. 2. Show the monster at infrequent yet terrifying intervals. 3. Allow the scares to gradually build to heart-pumping levels. There are also many eccentric touches here, not the least of which came in making Max Schreck's vampire a towering, skeletal being who resembles an elongated, skinned rat. Subsequent films equate vampires with bats, yet the rat angle used here has a startling, goose pimple-inducing effectiveness (especially the scenes where Nosferatu's coffins are opened and swarms of rats emerge). What truly makes Orlok/Nosferatu so terrifying is that he's presented as something of an enigma - unlike with many current horror flicks, Murnau and Galeen didn't see the need to burden him with a ham-fisted back story. He just there. It helps make moments like Nosferatu's floating out of his coffin so eerie and iconic. 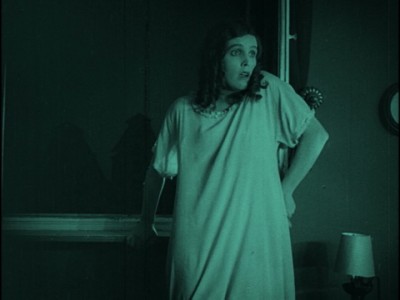 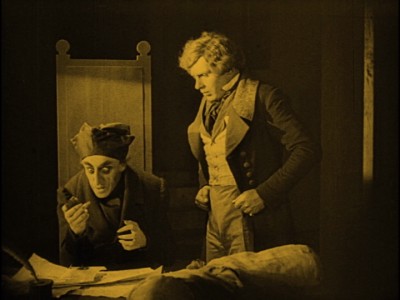 Nosferatu has been released countless times on home video, mostly in cheap cash-in editions using the film's shoddy public domain print. Kino Classics' 2 Disc Deluxe Remastered Edition duplicates most of the supplementary material from their 2007 Ultimate Two-Disc Edition. The film has been mastered in HD by Friedrich-Wilhelm-Murnau-Stiftung, the German film preservation foundation also responsible for many great-looking discs of silents released by Edition Filmmuseum.

Kino's press release for this edition of Nosferatu notes that "this is the same restoration as the previously released Ultimate Edition although it has been newly remastered for High Definition." So there you have it - the picture on this DVD version is an exact duplicate of the earlier issue, although the Blu Ray edition likely sports a lot more detail. Despite the lack of anything new, the restoration looks good. The 90 year-old footage sports the usual amount dust and scratches, yet the restoration allows for a sharper, cleaner image with good usage of color tinting. Because Nosferatu was originally filmed at a low frame-rate, many scenes sport jerky movements in order to make the action look as lifelike as possible.

This Nosferatu repeats the recording of Hans Erdmann's reconstructed original score present on the 2007 edition, available in 2.0 Stereo or a 5.1 Surround mix. The fully orchestrated arrangements, conducted by Berndt Heller with the Saarbrücken Radio Symphony Orchestra, add a lot of impact to Murnau's moody visuals. I didn't notice too many surround effects in the 5.1 mix, but it's a pleasant, pristine and unobtrusive listen.

All of the supplementary material is duplicated from Kino's prior 2002 and 2007 home video editions, including The Language of Shadows, a 52-minute documentary covering the making of the film. F. W. Murnau's development before and after Nosferatu can be traced via lengthy excerpts from his films Journey into the Night (1920), The Haunted Castle (1921), Phantom (1922), The Finances of the Grand Duke (1924), The Last Laugh (1924), Tartuffe (1925), Faust (1926), and Tabu (1931). Also appended from the earlier release, this double disc edition allows for viewing the film with English intertitles (disc one) or the reconstructed German intertitles with optional English subtitles (disc two). An image gallery rounds out the extras.

F. W. Murnau's stylized re-imagining of the Dracula story is given a luxe treatment with Kino Classics' Nosferatu: 2-Disc Deluxe Remastered Edition. Do people who already own Kino's 2007 release of the film really need this one? No, but on its own terms the set is a nicely presented way to view one of silent cinema's most enduring chillers. Recommended. 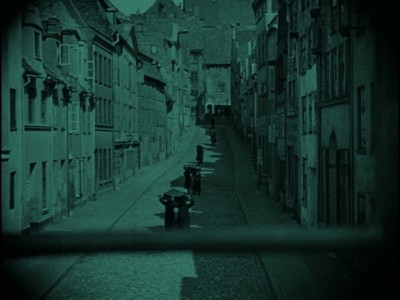 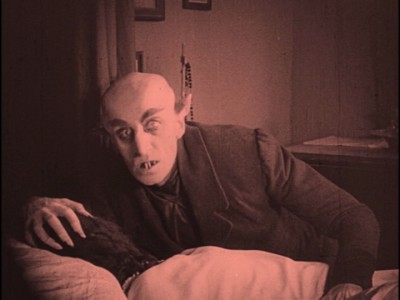