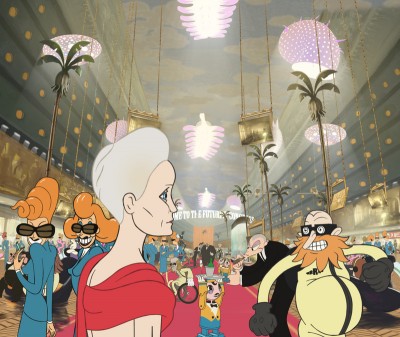 I caught the trippy, mostly-animated, sci-fi flick The Congress at the Alamo Drafthouse in Yonkers, NY, as part of the Fantastic Fest Tour, where they screen highlights from the festival held a few months ago at the main Alamo Drafthouse in Austin, TX. The Congress has been picked up for U.S. distribution by Drafthouse Films in 2014, but it was cool to check out the film before its national run.

The opening half (maybe two-fifths) of the film is live-action, with Robin Wright playing a fictionalized version of herself à la Being John Malkovich. She lives in an airplane hangar by the airport, so that her son Aaron (Let Me In's Kodi Smit-McPhee), afflicted with a disorder that degenerates the eyes and ears simultaneously, can fly his airplane-shaped kites near landing planes. Meanwhile, her daughter Sarah (Blue Bloods' Sami Gayle) laments the weird living conditions and harangues her mother when she can.

It's in this milieu that Robin's agent Al (Harvey Keitel) comes to her and says that the studio has a "final" offer for her. When they go into the meeting at Miramount Studios, we can be left to assume that "Miramount" is either just a stand-in for the idea of Hollywood or maybe that all of the studio conglomerates have finally merged into one giant entity. Studio executive Jeff Green (Danny Huston) lays it out for her: the business is changing and difficult actors like Robin are too much of a liability. Technology has advanced enough that actors just need to be scanned and then they can be manipulated in a computer to do whatever "acting" the movie requires. She just signs the contract, they scan her while she emotes for a couple hours, and then she can never act again; the studio will own her movie image forever. 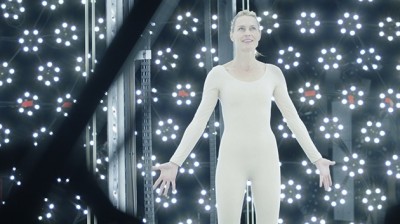 Robin is resistant to giving up the ability to choose her own roles, to give up her destiny as an actress. The exec and her agent insist that it is her ability to choose which has sabotaged a promising career. Finally, a discussion with her son's doctor (Paul Giamatti), where he expresses that Aaron's approach to coping with his condition may point toward the future of humanity, gives Robin the final push to negotiate the contract. She agrees to be sampled, but she puts a time-limit on it: twenty years.

Twenty years later, Robin arrives for contract negotiations at a hotel run by Miramount where a "Futurist Congress" is also being held. Upon entering the periphery, she is informed by the guard that she must be animated while she is on the premises. He gives her an ampule that she inhales, and then the film shifts almost entirely to glorious Fleischer-inspired animation. The next evolution of the entertainment business -- and reality with it -- is going to be revealed at The Congress, and the studio exec needs Robin to renew her commitment before the unveiling. (A funny incidental gag shows Tom Cruise -- now with grey hair, but still dressed as Maverick -- as the only other actor smart enough to negotiate for a limited contract.) 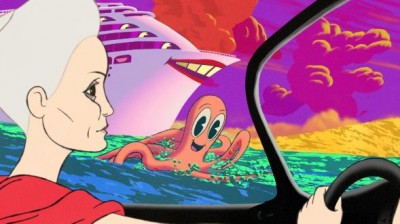 Reality does indeed change once The Congress begins, in a style reminiscent of Miyazaki's Spirited Away. It seems fitting that as Chihiro had Haku to help her navigate her new world in that film, Robin is suddenly guided by Dylan (voiced by Jon Hamm), an animator who knows her intimately because he has been the head of the Robin Wright department for decades.

The Congress is destined to be a perennial cult film. Director Ari Folman (Waltz With Bashir) seems more comfortable with the gorgeous, inventive animated sections of the film than the somewhat awkwardly paced live-action opening, but his excellent taste in actors will hopefully keep thrill seekers from getting bored in the early going. Of course, as Folman's film acknowledges and explores, entertainment is getting more and more tailored to the individual's wants, so impatient stoners could also just skip to the trippy visuals once this eventually hits home video. Similar to Donnie Darko, the film seems to have a lot of existential ideas and scientific theories that maybe don't hold up to rigorous analysis but remain provocative nonetheless. The film sparked my girlfriend and I to discuss moments and ideas from the film during the entire hourlong trip back from Yonkers. I'm excited for The Congress to hit U.S. theaters, because it is overwhelming and transportive on the big screen, and it certainly seems like a film that rewards repeat viewing. 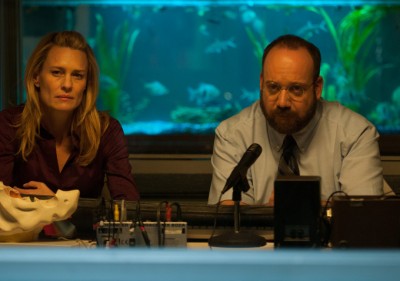