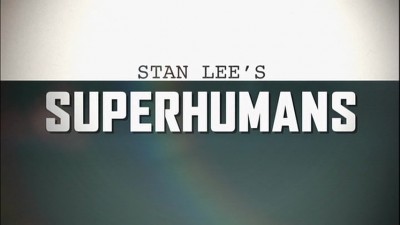 
The Story So Far
A throwback to shows like That's Incredible! mixed with a touch of Mythbusters, Stan Lee's Superhumans uses the conceit of Lee sending out contortionist Daniel Browning Smith to find other "super powered" humans to profile, and attempt to explain their abilities. The first season of eight episodes aired on the History Channel before being released on DVD in April of 2011. DVDTalk has reviews of the first season.

The Show
Though it certainly doesn't enjoy the high-profile of other shows on the now-inaccurately-named History Channel, apparently enough people tuned in to watch Stan Lee hunt for people with special abilities to warrant a second season with an additional five episodes. So he returns with his ambassador Smith to find more individuals who may be superhuman. It may have made more sense to call this Comic Book Men, rather than let Kevin Smith's reality show continue under that banner, since more often than not, this is really more about the idea of people who could exist in a comic rather than people with superhuman abilities.

Once again, Lee sends Smith all over the globe to meet people with unique skills, talents or attributes (about four per 44-minute episode), so he can observe them, often test them and determine if they are superhuman and, if possible, figure out how they do what they do. The vast majority of the people fall into one of three categories: extreme skill, incredible endurance or just simple freak show. People with fantastic aim and reflexes fall into the first group, like the internet-famous trick shot guy and an incredible knife thrower, while a guy who can swim extended distances in near-frozen water, a fellow with impervious testicles and a guy who has no issue with low oxygen are part of the second (which is one of the creepiest segments, as a group of subjects are subjected to simulated altitude increases until they start to pass out.) If brought together though, they could possibly be the worst super-hero team ever. 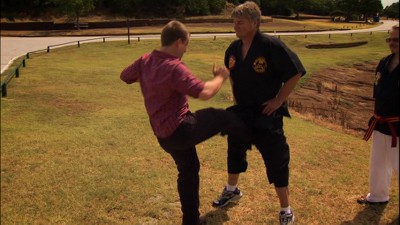 The freak show stars are one of the big attractions though, and for some reason they mainly come from eastern Europe. You've got a guy who can conduct electricity, a guy metals sticks to and a guy who can pull a car with his eye sockets (along with the impressive power to make me not watch a segment at all.) There's also, for some reason, after a brief flirtation with the idea in the first season, an obsession with the eastern idea of the life force Qi, which is at the core of several segments, including a man with a superstrong finger (oh the jokes…) and a man who creates heat through his hands. Disappointingly, no real effort is made to explain these abilities, which is the case with most of the more interesting subjects, including a supposed telekinetic and a blind man who can somehow see using his mind.

Like last season, there are a few people here who are less superhuman and more like Tony Stark, showing an advanced ability to work with technology, like the guy who creates a bike than can reach 70 miles per hours, a guy with a functioning jetpack, a man with a glider suit and a record-breaking rocket skater. There's nothing wrong with these achievements (the bike in particular is rather impressive) but these people are far from superhuman. One guy even has cybernetics surgically installed in himself and his wife. But when the spotlight falls on a scientist who figures out a way to make a spider-like silk out of milk, and he is compared to Spider-man's web-slinging though, it is just a tad ridiculous. 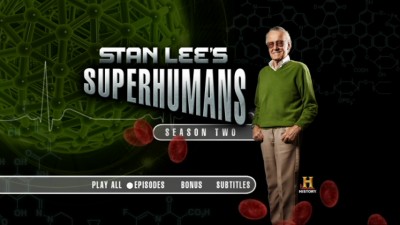 The DVDs
The 13 episodes of the second season of Stan Lee's Superhumans are spread over four DVDs, which are packed in a standard-width keepcase with two dual-hubbed trays. The DVDs feature a mostly-static, anamorphic widescreen menu with options to play all the episodes, select shows (and then segments), adjust languages and check out extras (where accessible.) There are no audio options, but unlike last season, English and Spanish subtitles are included.

The Quality
The anamorphic widescreen transfers on this series look a touch better than they did last time around, offering increased clarity, a sharper overall image and more vivid color, though there are a lot of visual effects utilized to stylize the series. The enhanced quality of the video comes with no new issues with dirt, damage or digital artifacts, resulting in a pleasing look to the set.

The Dolby Digital 2.0 audio tracks are solid, allowing you to hear everything clearly, with a center-balanced presentation of the dialogue, sound effects and music. Though there's nothing dynamic about the mix, some fun is had with the sound to enhance some of the segments, and that comes across without distortion.

The Extras
There are an impressive 31:36 of additional scenes, 13 in all, from across this season's shows. The content can be hit or miss, mixing silly moments, like the Human Hydrant goofing off, with bits of background that didn't fit the flow of the show and additional "stunts," like the Human Generator cooking a disgusting looking sausage. Oddly, the audio seems badly mixed on these bonus clips, giving more emphasis to the music and sound effects, and as a result the dialogue is a bit underwater. There's a chance this was on purpose though, as these clips have more on-screen text than the episodes, but the reasoning for that escapes me. 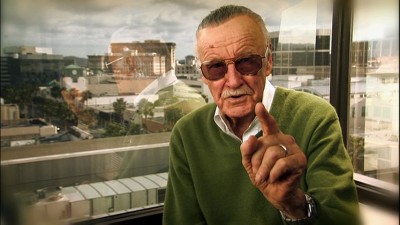 The Bottom Line
Thanks to the show's format, these 13 episodes are just more of the same, as you meet a handful of human oddities, often stretching the idea of "super powers" to its limit. The presence of Stan Lee though lends the show far more of an enjoyment factor, but even so it's more of a pleasant diversion than something you'll watch more than once, even if the quality is good and there's a decent amount of bonus content. Unless you must own all things Stan Lee, this is one you will be satisfied with by a rental.