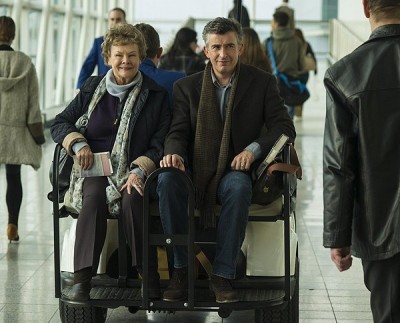 If you see Philomena without your parents, you're probably going to go home and tell them to go see it immediately afterwards. Especially your mom. Or your grandmother. It could be a "whole family" selection for the day after Thanksgiving.

This is yet another "based on a true story" drama. It stars Steven Coogan (known in family circles as Octavius in the Night at the Museum movies) as Martin Sixsmith, a disgraced reporter and political spin doctor who stumbles onto the story of a lifetime--though one he only tackles begrudgingly. At a party, the catering waitress (Anna Martin Maxwell) tells him that her mother, Philomena (Dame Judi Dench, Skyfall), has just let drop a fifty-year-old secret. As a young woman in Ireland, Philomena got pregnant. The convent that took her in put her to work doing laundry as an indentured servant and then gave her son up for adoption. All Philomena has of her child is a photograph taken just before he left. She'd like to find him and make amends and ask if he ever thought of her.

It's not the kind of thing Martin usually writes about, but needing a change of pace, he agrees to help. Once they visit the nunnery, he begins to suspect something fishy went down, and this tale may be more than he bargained for. Following a lead, he takes the old woman to America and back. What they uncover is the stuff of spoilers.

Philomena is the work of director Stephen Frears, known for crime dramas like The Grifters and Dirty Pretty Things, but who also struck gold a couple of years back by casting Helen Mirren as The Queen. Philomena is a bit of a softball effort for him, but he proves himself adaptable and delivers some fairly intelligent schmaltz. Coogan worked with writer Jeff Pope to adapt Sixsmith's book. Their focus is less on the mystery and more on the odd match of the Atheist journalist and the devout Catholic. He bangs on about the indifference of the universe, she maintains that accepting the greater good makes for a happy life. As the pair suffers setbacks and victories together, they move closer to a middle ground.

Philomena is really a performance movie. The writing is fine, as is the staging, but the true appeal is watching Coogan and Dench together on the screen. The comedian is great as the grump who can't resist a sharp word, but also regularly takes his lashings. He smartly doesn't try to outdo Dench, who displays wisdom and charm as Philomena. The actress gets lots of laughs, establishing that Philomena's basic goodness allows her to get away with saying just about anything, even if sometimes her innocence is just a front. As the story progresses, we regularly watch the pain and heartbreak arise in the old woman, only to watch her tamp it down once again.

It's that kind of stuff that makes this work as a family drama, and why Dench went on a public campaign to get a better rating from the MPAA, who objected to a couple of F-words, apparently forgetting that we Americans think it's hilarious when senior citizens swear. Certain ingrained cynicisms creep up when I see a movie like Philomena. It can be a little too clever, things move a little slickly, and some of the sentimentality lands with me in much the same way it lands with Martin up on the screen; yet, there is a certain undeniable warmth that melts even a cold interior like mine. A warmth not unlike the fresh-out-of-the-oven pie grandma is liable to bake for you as thanks after you buy her a ticket to Philomena. 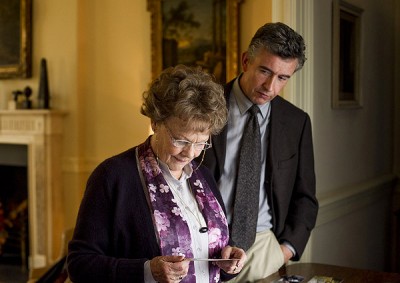