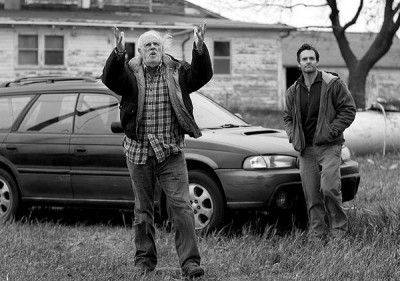 Despite a poster that parodies The Girl with a Dragon Tattoo and early comparisons to Fargo and misguided critical minds speculating that the black-and-white photography meant the movie was film noir, Alexander Payne's Nebraska is free of blood, serious crime, or nihilism. On the contrary, it's anything but. Nebraska is a movie that believes people can still be good and that they are at their best when being good to each other.

Bruce Dern stars in Nebraska as Woody, a retired mechanic and painter who has drank away the years and perhaps a good portion of his mind. Woody has received a publisher's sweepstakes letter and is convinced that the million dollars it promised is real. Unsurprisingly, the other folks in his life see the scam for what it is, but stubborn ol' Woody refuses to listen. After several attempts to walk from his home in Billings, MT, to Lincoln, NE, where the prize headquarters are located, his youngest son David (Will Forte, MacGruber) decides to indulge his father's fantasies and drive him to his disappointment. This despite the protests of his ornery mother (June Squibb), who has had enough of Woody's nonsense after more than five decades together, and his more successful brother, Ross (Bob Odenkirk of Mr. Show and, more recently, Breaking Bad).

Ross is the local television news anchor, while David sells home entertainment setups in an electronics store. This likely contributes to why David wants to reach out and let their dad have his moment, as delusional as that may be. The road trip in Nebraska goes the way such ventures usually do, however, and the cantankerous drunk soon gets into trouble and injured for the cost of it; David takes a detour to the town where Woody grew up, thinking that time amongst his people will get Woody off this foolish quest. 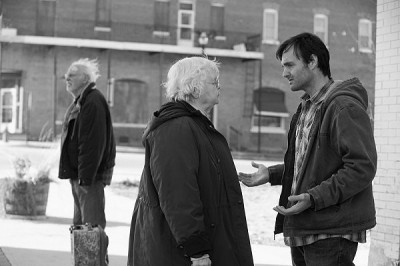 It's here that Nebraska begins to really come together. Writer Bob Nelson has a good ear for small-town dialogue and an intimate understanding of the family dynamic. A scene of Woody and his male relatives gathered in one room watching football in near silence while the ladies gab away in the kitchen will likely remind more than just me of their own families. The depiction of Midwestern existence is gently satirical. Nelson and Payne enjoy the quirks of regular folk, and Payne is nothing if not an empathetic director. Be it the misguided snobs of Sideways or the upper middle-class set adrift in The Descendants, the director seeks to understand and heal his characters rather than deride them.

The Payne motion picture that Nebraska will garner the most comparisons to, though, is About Schmidt, another film where an aging man hits the road in search of lost promises. The difference here is the added family dynamic. Unlike Jack Nicholson's Schmidt, Woody is not capable of expressing his desires or even representing himself. Instead, the people around him speak for him. As the movie progresses, David gets a more varied picture of his father. The perceptions of friends and enemies (including a scuzzy Stacy Keach as a former business partner) don't always jibe. Woody, it seems, contains multitudes. Only the point of view of his wife never wavers. Squibb is outstanding as the spouse, whose suffering has been long but not silent. Her rants and putdowns eventually give way to real insight. She sees things as they are, and she's fed up.

Black-and-white here serves a similar purpose as it did in Peter Bogdonavich's The Last Picture Show. Phedon Papamichael's photography captures the nostalgia inherent in Woody's fading memory and the desolation of the landscape and melds the two together. They are, essentially, one. Nothing about where Woody comes from is as good or as fertile as what the common American mythology might otherwise suggest. His is a cold, hard country that produces cold, hard people. The simple life is simple because to dream of something more, to imagine one could be a millionaire, would only result in heartbreak. Mark Orton's musical score subtly works with this idea, hinting at the emotion just below the surface without ever betraying Payne's intended tone by forcing any of it out into the open.

Nebraska ends on a positive, letting sweetness win out over cynicism. Will Forte deftly handles the shift from annoyance to acceptance, working to give his father some measure of what he deserves. As it turns out, a million in cash is not as necessary as the attention a small victory might bring. Nebraska strikes a few obvious feel-good notes, but without being cheap about it, allowing the audience to leave in a better mood than when it came in. 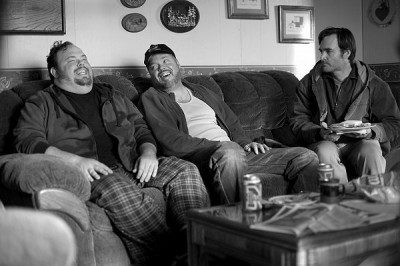