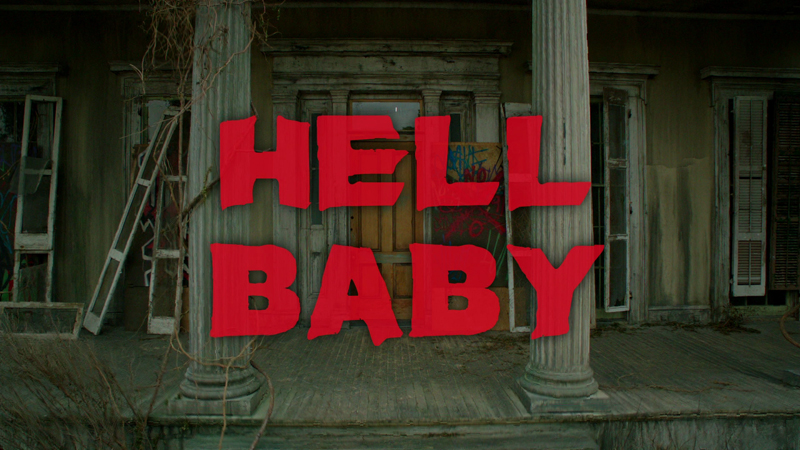 
The Movie
Thomas Lennon and Robert Ben Garant are, as a team, an enigma. Having come up with The State, and having brought us some very weird, very great series like Reno 911! and Viva Variety, they should be pigeon-holed creators of alt-comedy oddness. But then, as writers, they have been responsible for $1.5 billion in ticket sales for their mainstream comedies, driven largely by their very popular Night at the Museum franchise. Obviously, despite their unusual senses of humor, they have their fingers on the pulse of what works in theaters. So it is a bit strange that, when making their debut as directors, they decided to team up to tackle their own quirky horror-comedy script Hell Baby, rather than try something with a chance to make some money and open some eyes.

Of course, the opportunity to work with a cast of hugely funny people and do just about whatever they want was probably a big draw as well, and taking the lead as directors may have been the only way they were getting this script made. The story of Jack (Rob Corddry) and the massively-pregnant Vanessa (Leslie Bibb) crosses a couple of genres, as they begin to experience supernatural distress upon moving into a dilapidated New Orleans home with a bad reputation. Jack tries to make the best of it, but as things get weirder and weirder, and his beautiful wife becomes increasingly demonic, he's going to need more help than just F'resnel (Keegan-Michael Key), a neighbor with severe boundary issues. Help in the form of two bad-ass exorcists from the Vatican, played by Lennon and Garant. 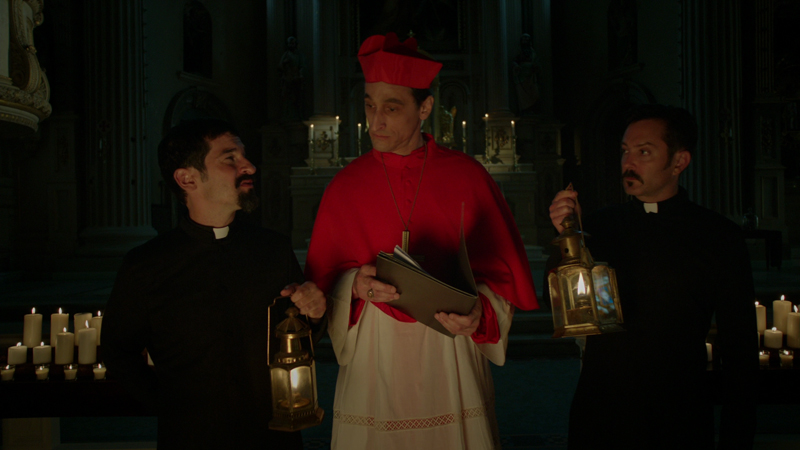 Hell Baby has some genuine scares that will make you jump (and often then laugh) along with some over-the-top gore, making it seem similar to an Army of Darkness, but there's a lack of balance to the film, as the horror, interspersed with gags, is mostly up front to establish the story, while the second half is almost all comedy. The thing is, the humor is so much better than the horror, which makes a lot of sense when you consider the all-star comedy team starring in this movie. You've got Human Giant troupe-mates Paul Scheer and Rob Huebel as a pair of terrible cops, Michael Ian Black and David Wain in cameos, Kumail Nanjiani stealing scenes as a cable installer, Riki Lindhome as Vanessa's hippy-dippy sister, and Lennon and Garant as the best exorcists ever. It would be hard for this group to not be funny, and they managed to put together the first pot-smoking scene that made me laugh in recent memory (with a fabulous kicker from Nanjiani.)

But as good as they are, and as fun as Bibb is as the mommy-to-be from hell and Key is as the omnipresent F'resnel, the movie rides on Corddry, who was a brilliant choice to play Jack. After his turn in Warm Bodies, it's obvious he's deft at juggling pathos and comedy, and that's important here, because you have to be able to side with him in his struggles, but laugh at his ridiculous situation, and he pulls that off terrifically well.That he's incredibly funny doesn't hurt, as his reactions to his swiftly spiraling life and his castmates are fantastic.

The hilarious comedy is the reason to check out and enjoy this film, but Lennon and Garant certainly hedged their bets by loading it with breasts, nude and clothed, attached to strippers and hot nuns, as well as what may be the longest post-shower, non-sexual nude scene in the history of cinema, featuring Lindholm, best known as half of the comedic musical group Garfunkel and Oates. I'm not saying her or the other mammary glands on display are a reason to watch this film, but if you're a straight dude (or a lesbian) who doesn't know if Lennon and Garant are in your wheelhouse, it's an insurance policy for the time you'll put in. You shouldn't need it though. 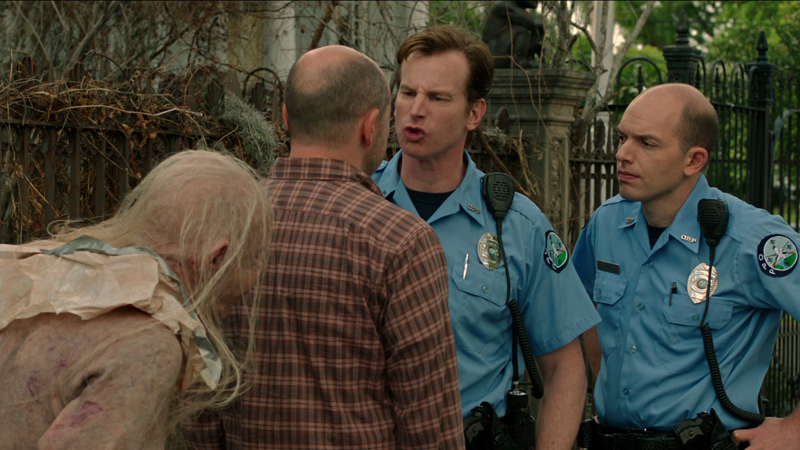 The Disc
This film arrives on one disc in a standard-width BR keepcase. The Blu-ray features an animated menu, offering the option to watch the film, select chapters, adjust languages and check out the extras. Audio options include English Dolby TrueHD 5.1 and English Stereo 2.0 tracks, while English SDH and Spanish subtitles are available.

The Quality
The 1080p, AVC-encoded transfer is clean. Too clean. There's a lack of grain to the image that makes it look like straight-up video, with a crisp, super-sharp picture and a load of fine detail. Black levels are solid, and the color is bright and vivid, while the skintones are spot-on (compare a topless Corddry standing next to a topless Lindhome.) There are no notable concerns regarding digital distractions.

The Dolby TrueHD 5.1 audio doesn't have any real issues in terms of the clarity or distortion, and the low-end is decent, but it doesn't do a whole lot with the film's action. There's some occasional dynamic action, particularly toward the end when things get a bit hectic, but for the most part, the surrounds serve up just simple atmospheric sound, along with the score and a few sound effects. It feels like it could have been a more aggressive presentation, even if the score does carry its weight.

The Extras
There's a decent amount of bonus content here, split into two areas, deleted scenes and gag reels. There are nine deleted scenes, running a total of 27:50, which include a bit more of Nanjiani. more from Lennon, Garant, Scheer and Huebel, and over three minutes of additional improv from the pot scene. Nothing here should have been left in, but there are a few laughs (specifically from Nanjiani.)

Maybe I just expected a bit more from this cast, but the gag reels weren't too great. The first (5:19) features various screw-ups from the filming (some of which were in the deleted scenes), offering a few laughs, while the second, longer reel (8:33) has Lennon and Garant sitting listening to a comic (possibly Key) on radio delivering a ridiculous, aggressively-bad routine that just keeps going. It wore out my patience after a while, but the loop of the two exorcists helped. 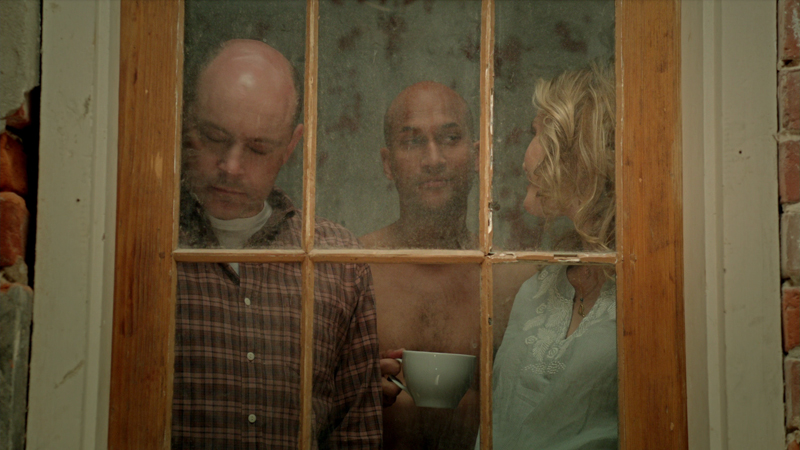 The Bottom Line
A straight-forward horror parody would have been the way to go to really make this movie work, but even after spending the beginning setting the scary stage, the movie is tremendously funny, with several great performances, especially from Corddry, who is climbing my own personal charts. The disc looks and sounds solid and offers a bit of additional content for fans of the performers involved. If you like their work elsewhere, seeing these great comedic performers together makes for a good time.