Other // Unrated // December 10, 2013
List Price: $79.99 [Buy now and save at Amazon]
Review by Stuart Galbraith IV | posted December 30, 2013 | E-mail the Author
By 1950, B-Westerns were a dying genre. The postwar Baby Boom, alternative recreational activities, and especially the new medium of television had cut movie attendance figures in half. And yet, while the biggest Hollywood studios kept its mitts off TV, initially regarding it as the mortal enemy, forbidding its contracted talent to appear on even the most popular shows, B-Westerns blazed a trail just as its Western heroes led wagon trains across the new frontier. B-Western stalwarts like William "Hopalong Cassidy" Boyd, Gene Autry, and Roy Rogers and wife Dale Evans became some of the medium's first superstars, building multi-million-dollar corporate franchises that shrewdly diversified into every conceivable area of merchandising, especially toys and other accessories marketed to children who regarded Gene and Hoppy and Roy and The Lone Ranger as sagebrush gods.* Thanks in large part to the success of The Gene Autry Show, the original Singing Cowboy amassed a fortune in excess of $325 million at the time of his death in 1998.

The Gene Autry Show (1950-56) is basically a well-oiled, handsomely produced extension of the B-Westerns Gene had been making for years. Indeed, during the first three years of the TV show Gene continued cranking out another two-dozen or so feature films for Columbia Pictures through 1953's Last of the Pony Riders, Gene's last B. The Gene Autry Show ran 30 minutes and the Columbia features typically ran a bit more than twice that, but otherwise they were virtually indistinguishable. If anything, Gene's TV show was a bit better produced.

Thanks to Gene's deep pockets and personal dedication to America's Western heritage, the films and TV series Gene controlled have remained in great shape through the years, sadly not the case for the equally if not more beloved films and TV series of Roy Rogers, which seem forever doomed to PD purgatory. The Gene Autry Show: The Complete Television Series is a repackaging of the series' five seasons and includes a bonus "sampler" disc of other TV shows produced by Autry's Flying A Pictures, Inc.: The Range Rider, Annie Oakley, Buffalo Bill, Jr., and The Adventures of Champion, with two episodes apiece. 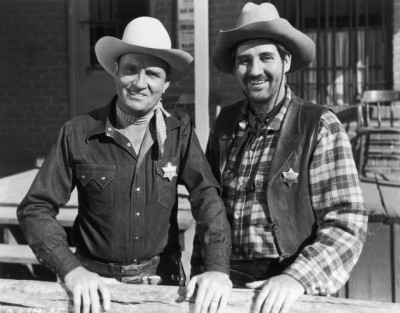 Annual rankings of the top movie stars usually relegated B-Western heroes into their own separate category, but Gene's popularity was such that, during the early 1940s especially, he made the general "Top Ten Money Making Stars" list for several years, ahead of such powerhouse names as James Cagney, Gary Cooper, Bing Crosby, and Bette Davis. Gene dominated the list of Top Ten Money Making Western Stars until 1943, when to Republic's chagrin he joined the Army Air Corps at the height of World War II, but held on to Second Place (after Roy Rogers, Republic's replacement for the absent Gene) until 1952.

Gene was a shrewd businessman. After the war he left Republic and took full control of his career, producing B-Westerns himself for release through Columbia, continued thriving as a songwriting-recording star and headlined a hugely popular weekly radio series, Gene Autry's Melody Ranch concurrent with his films. When The Lone Ranger made a successful transition to television in September 1949, (and edited versions of Hoppy's films three months before that) Gene saw the writing on the wall.

The Gene Autry Show was virtually indistinguishable from Gene's earlier and concurrent B-Western features. Though he played a character also named Gene Autry, each episode was a self-contained story that might one week cast Gene as a government agent working undercover, the next week as a ranch hand battling a crooked land baron. Similarly, Champion, "World's Wonder House" (and actually the third of three horses to play him) received second billing as Champion, Gene's faithful equestrian companion.

Fellow songwriter Smiley Burnette had been Gene's sidekick in virtually all his pre-war service Republic films, but for the Columbia films Gene hired Pat Buttram, later famous and hilarious as anything-for-a-buck Mr. Haney on Green Acres, whose trademark was his distinctive Alabamian drawl. "My voice never quite made it through puberty," he said. "It has been described as sounding like a handful of gravel thrown in a Mix-Master." Buttram was retained for the TV show as well, while Smiley was brought back for the last batch of Columbia films, possibly an effort to better distinguish those films from the TV series. While Gene Autry always played Gene Autry, initially Buttram's characters were given various names until Gene, mixing them up and blowing takes (and thus wasting money), decreed that henceforth Buttram's characters would always be named "Pat Buttram."

(Adding to the confusion, Buttram nearly died in an accidental explosion during production of the first season. Chill Wills, Fuzzy Knight, and Alan "The Skipper" Hale, Jr. replaced him until he recovered.)

The Gene Autry Show is not particularly groundbreaking in the aesthetic sense. It's really just an extension of the B-Western form, agreeably distilled into the half-hour TV format. But, by early 1950s TV Western standards it's also surprisingly well produced, more so than the cheaper looking Lone Ranger, and less perfunctory than the Boyd's disappointing Hopalong Cassidy series. And, to top it off, virtually every Gene Autry Show finds time for Gene to pleasantly sing at least two songs along the way.

Airing Sunday (later Saturday) nights at 7:00pm on CBS, the series produced fewer episodes in its later seasons, similar to the syndicated Adventures of Superman. Twenty-six episodes, including two made in color for a proposed color broadcast technology eventually abandoned by CBS, were filmed for Season One. Twenty-six more were shot for Season Two, but then the number dropped to just 13 each for Seasons Three, Four, and Five. For the last season, The Gene Autry Show switched to full color, this a good decade before most shows made the transition from black-and-white. However, these episodes don't look nearly as good as the filmed-in-35mm episodes from seasons 1-4. They may have been shot in 16mm, or perhaps the original negatives had faded to point where secondary elements were utilized.

The mostly black-and-white Gene Autry Show looks great, the handsome (for the time) production values really shine here. As noted above, the 15 color shows are murkier and show signs of damage, and presumably come from dupe elements rather than the original camera negative. The 91 episodes are spread across 14 single-sided, region 1 DVDs, nearly 48 hours worth of material. The Dolby Digital mono, with no alternate language or subtitle options, is also fine.

Best of all is that sampler disc, with two episodes apiece of other TV series Gene also produced: The Range Rider, Annie Oakley (the most popular), Buffalo Bill, Jr., and The Adventures of Champion.

A fun series that, as the saying goes, is good entertainment for the whole family, The Gene Autry Show: The Complete Television Series is a great value boasting mostly excellent video transfers, a must for Western fans and Highly Recommended.

* Sergei Hasenecz adds, "It was William Boyd who was the pioneer in this. He cut the trail all of the others followed, and he took a very big risk. He not only bought all the rights to the Hoppy movies, stories, and character, to do so he mortgaged his home and took out every loan he could to raise $350,000."