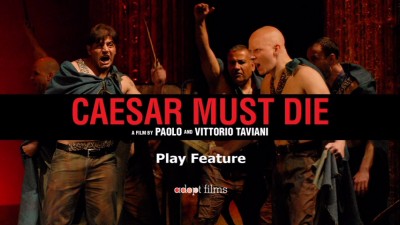 Italian filmmakers Paolo and Vittorio Taviani (The Night of the Shooting Stars) partnered with a real-life prison theatre troupe to make Caesar Must Die, a semi-fictional portrayal of an all-inmate production of William Shakespeare's Julius Caesar. Shot inside the actual high-security prison, the Taviani brothers take a dialed-back visual approach, using the stark surroundings and black-and-white film to emphasize the isolation and disconnect from the outside world.

The structure of Caesar Must Die is simple. The narrative proper begins at the auditions, with each potential actor showing their emotional range by reciting their personal stats, a kind of strange statement of identity as an effort to adopt another. Once the cast is chosen, rehearsals begin. Under the contrivance that the prison theatre is being renovated, the Tavianies move the action around isolated spots in the jail, using the bare corridors to create a minimalist environment where the performers can do their thing. The rehearsal sequences are shot in order so that we see the full play (or at least a digestible, condensed version) in its entirety, becoming more elaborate as the fiction heats up and the players get closer to opening night. Shakespeare's story is interrupted as interpersonal dramas amongst the prisoners invade the scripted one, allowing for the actors' personalities to emerge and their own conflicts to reflect and comment on the classic play.

There's not much more to it than that, but there also doesn't really need to be. The prisoners are enthralling performers, comfortable in their own skin and finding a sweet spot where their true selves are allowed to show through the work. The Tavianies largely stay out of the way, using the camera to probe the intimate moments, while alternately calling attention to the performance and enhancing the illusion. The intended goal of Caesar Must Die is to put a spotlight on the healing power of art and underline how theses kinds of activities can be transformative for the incarcerated men. The bitter irony, of course, is that for them, the transience of the beneficial effects is also more acute. For the duration of the production, they are free, but once the curtain goes down, they are again just average inmates retuning to their cells. 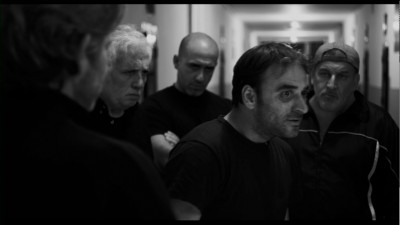 Video:
Caesar Must Die was shot in black-and-white with a few scenes also in color. The DVD presents the movie at its intended 16:9 widescreen aspect ratio. Resolution is very good, with no appearance of ghosting, digital lines, or pixilation. Dark and light are balanced well.

Sound:
The original Italian soundtrack has been mixed in Dolby Stereo and is fine. There is not much going on here in terms of sound, but the dialogue is nice and clear and easy to hear.

English subtitles are burned in and are mostly easy to read, though they tend to flicker when there is a lot of movement. It almost looks like the actors are bumping into the words.

FINAL THOUGHTS:
Recommended. Caesar Must Die is an interesting exercise, toying with the fourth wall and creating a fictional world within a real-life location in a way that blurs the line between documentary and crafted narrative. The story focuses on an Italian prison's theatrical troupe as they rehearse for a production of Shakespeare's Julius Caesar. As opening day approaches, more of the incarcerated actors' personalities have emerged, and the scripted action begins to have an echo effect, highlighting the inmates' lives as well as that of the historical figures they are portraying. It's all very effective, and definitely worth a watch. 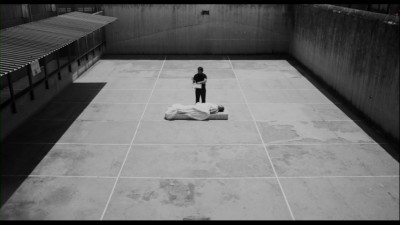