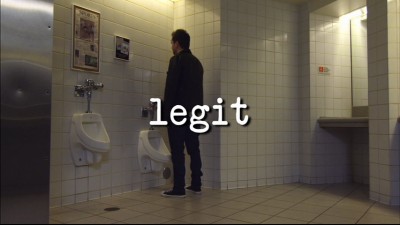 
The Show
It is very easy to look at Australian comedian Jim Jeffries' show Legit and compare it to Louis C.K.'s Louie, and not just because they are both sitcoms starting with the letter L, starring stand-ups, that have, at least at one point, aired on the FX network. There's also the matter of them featuring anti-heroes that often don't do the right thing, but who, at heart, are pretty much good people who respond to an unkind world the best they can. But aside from them both featuring the occasional bit from their stars' stage act and a willingness of not always go for the laugh, the comparisons peter out, with Legit coming off as more of a traditional situational comedy, which is, in no way a black mark against it. If anything, it's one of its strengths, as it breathes new life into the format.

Perhaps that's because the series, co-created by Jeffries and veteran TV director Peter O'Fallon (also the director of the cult-classic Suicide Kings), doesn't feel like a sitcom at the start, with the pilot coming off like an independent short, telling the story of a self-absorbed, womanizing, coke-snorting stand-up comic (Jeffries) looking to do something good for once, and decides what he'll do is take Billy (DJ Qualls), the muscular dystrophy-afflicted brother of his born-loser pal Steve (Dan Bakkedahl), to a brothel to get him laid for the first time in his life. You know, a real feel-good adventure. This sets off a season of misadventures for the odd trio, including a run-in with armed robbers, misguided attempts at relationships and struggles in the dark heart of Hollywood. 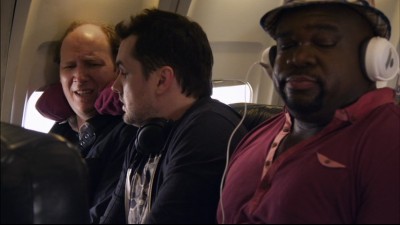 The show manages to strike an unusual balance, as you find yourself rooting for a group of wholly unlikable people, who somehow don't cross the line into being hateable, even when they go after each other, which often happens between Jim and Billy. Perhaps it's pity, but it feels more like genuine charm, as Jeffries has very little filter, and what he says often makes sense, even if it's not the nicest thing to say. When he lives the dream of publicly calling out an obnoxious fellow passenger on a flight, you will find yourself cheering him on, despite knowing he should probably just swallow his words. The same goes for when he tries to explain a joke he made about rape, as you know he's just burying himself, despite being very logical about the whole thing. One suspects even if you support what he's saying, if you were there, you'd just avert your eyes, which makes watching it unfold in a sitcom a more pleasant experience.

The abusive chemistry between the three main characters is the gas in the show's engine, but the way the rest of the world interacts with them, including Steve and Billy's mother Janice (Mindy Sterling), Billy's nurse Ramona (Sonya Eddy) and Jim's girlfriend Peggy (Ginger Gonzaga,) is the source of most of the comedy, not to mention an eclectic gang of guest stars like John Ratzenberger, Andy Dick, Marlon Wayans and Verne Troyer. However the show walks a fine line with the comedy, often injecting some very real pathos, usually surrounding Billy and Steve's family, which inevitably engulfs Jeffries. Frequently that involves Billy's disability, as well as others at his nursing home, including the hilariously random Rodney (Nick Daley.) An entire episode, the sensitively-titled "Cuckoo's Nest," focusing on the strife between Jim and Billy, is built around the home, and features several actors who have real disabilities. The series easily could have presented them as props to be laughed at (and honestly, there's nothing to stop viewers from seeing them as such) but they are well integrated into the story and are crafted as characters whose maladies are part of them (and, considering there are no sacred cows in this show, they are not immune from being a part of a joke, as "Walleye" and "Pinball" prove definitively.)

Looking over the first season, it would be hard to find a weak link, as pretty much every episode has some high-point, especially the brilliantly-written "Anger" and the hilarious late-season "Hat Hair," which pairs an absurd trip to the ballpark with a darkly funny B story about a cat named Freckles. If there's anything to complain about, it's that the season is a bit top heavy, with the three first episodes being among the show's best, while a bit of seriousness creeps in later on that, though important to the characters, isn't a laugh riot. An increasing, and somewhat unmotivated darkness in Billy's character doesn't help either, though it's hard to expect a guy trapped in his own body to keep a cheery disposition. Perhaps if it came in contrast to lighter episodes it would have worked better. 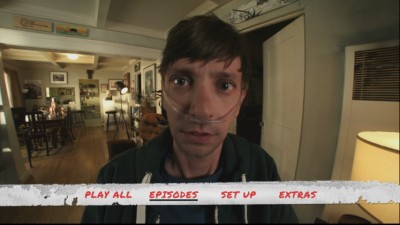 The DVDs
The 13 episodes of the first season of Legit are spread over two DVDs, which are packed in a standard-width keepcase with a tray for the second disc. The DVDs feature a animated, anamorphic widescreen menu with options to play all the episodes, select shows, adjust languages and check out extras. There are no audio options, but English, Spanish and French subtitles are included.

The Quality
The anamorphic widescreen transfers on this series look good, with a decent level of fine detail, while the color, though a touch muted and dull (perhaps a style decision), is appropriate, with some bright, vivid reds and light blues. The image is clean across the board, and doesn't suffer from noticeable compression artifacts or other digital issues.

The Dolby Digital 5.1 audio tracks are solid, with a focus on center-channel dialogue that befits the show. The surround channels mainly get some light atmospheric effects and help boost the infrequent soundtrack, but don't expect anything dynamic in the mix. Everything is clear and crisp though.

The Extras
The big extra is the set of audio commentaries, with one for each episode, featuring Jeffries, O'Fallon and Bakkedahl teaming up on them all (with some bonus appearances by Jeffries' baby Hank.) There's something of a formula to them, with the trio focusing on the inspiration for the stories, the work of the extras (especially if they are hot women) and beating on Qualls and Stirling, but they cover plenty of ground in talking about the production, while also touching on little odds and ends, like Jeffries' theme song for the show and his interest in RuPaul's Drag Race. And as you would expect from three guys behind a series like this, the chat often veers into the politically incorrect, making for an entertaining listen.

Up next is a set of eight deleted scenes (10:23), with the episode they were cut from indicated on a title card. Some are just slight alternate takes, but nothing is dramatically interesting in comparison to the aired episodes. What is worth checking out though is the nearly double-length director's cut of the show's pilot (38:49) which goes in a very different direction, featuring a guest appearance by Eddie Izzard, a therapist who was cut from the series and actual emption from Jeffries (which was wisely excised.) Getting the opportunity to compare this with the aired pilot gives insight into how a show can change as it's developed.

"Jim Jeffries' Journey" is a high-falootin' title for what's 26:32 of takes of Jeffries improvising several scenes from the first season. While some are very funny and could have easily made it into the final cut, others show the downside of improv. Either way, combined with the extended pilot, they allow a peek behind the curtain of comedy's creation. If you want more unplanned funny business, it's available in the 15:08 gag reel. It's not a laugh riot, but it is entertaining nonetheless.

Also available is the 2:05 "Rodney Auto-Tune," which remixes many lines spoken by the show's breakout intellectually-disabled star into a surprisingly catchy song. Hearing more from him in the extras would have been appreciated. Maybe next time. 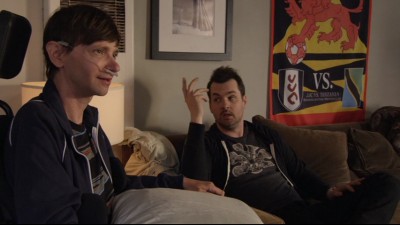 The Bottom Line
There's a lot to like about Legit, if you can get past the idea of awful people doing awful things, which, despite my distaste for such matters, was what happened for me, mostly due to Jeffries' overwhelming charm and the show's oddly-touching storylines. If that works for you, you'll blow through these enjoyable 13 episodes and dive right into the second season. The presentation is solid, and there's a nice amount of bonus content to check out, making it well worth picking up for Jeffries fans.