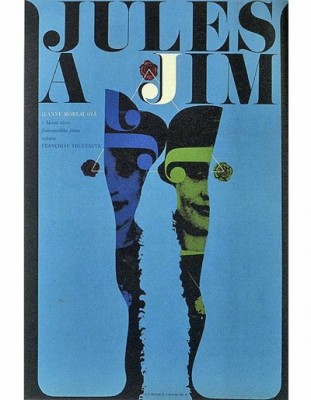 Years of parody and homage and outright emulation have done little to dim the magnificence of François Truffaut's third feature film, Jules and Jim. Watching Criterion Collection's excellent new Blu-ray of the 52-year-old French New Wave masterpiece, it's as easy as ever to be swept up in admiration and wonder.

All the elements of Jules and Jim combine brilliantly: Raoul Coutard's idiosyncratically fluid widescreen cinematography, Georges Delerue's alternately lush and playful musical score, Truffaut's precise yet seemingly freewheeling direction, the voice-over heavy script by Truffaut and Jean Gruault which tries to cram in as many brilliant lines from Henri-Pierre Roché's novel as it can, and the indelible performances by the three leads, Jeanne Moreau, Oskar Werner, and Henri Serre.

Jules (Werner) and Jim (Serre) meet in early-1910s Paris. Jules is Austrian, and Jim (pronounced as in English) is French. They become fast friends, who discuss poetry and chase women together. Then the free-spirited Catherine (Moreau) comes into their lives. Jules -- perpetually the wingman to Jim's Casanova -- calls dibs on being with Catherine, and Jim respects that claim, although the three of them become an inseparable band of playmates. Eventually, Jules decides to marry Catherine, though the more experienced Jim has misgivings that she could ever be tied down. Nonetheless, Catherine decides to give the marriage a shot. Then, World War I comes and sweeps each man to the ranks of his respective country's army. The men manage to make it through the war in one piece, and Jim meets up with his former playmates and their young daughter at their new home near the Rhine. As Jim had predicted, Catherine is now chafing at the bonds of marriage and reaches out to him. Jules gives Jim his blessing to be with Catherine, as long as it means she won't leave their home to be with some other lover, like boho troubadour Albert (Bassiak). But can Catherine ever be satisfied with only Jim and/or Jules?

Catherine is a tightrope of a role. Her whimsical nature could come off as fickle and aribitrary. She could be read as a self-centered villainess (by the end, I'm sure there are viewers who think of her this way). But Jeanne Moreau so totally inhabits this character as a three-dimensional person that all of her contradictions and seemingly random whims -- like drawing a moustache on her face and trying seriously to pass as a man or getting out of a tiresome conversation by jumping into the Seine -- are more than attention-grabbing stunts. They're honest expressions of a liberated spirit, uninterested in conforming to anyone's opinion of who she is or should be, especially not the opinion of the men she chooses to love. If there's an element of manic depression to Catherine's character, it not only galvanizes her as a tragic figure but goes a long way toward representing her complicated humanity.

In many ways, Jules and Jim take the backseat in their own movie. While neither of them are cardboard cut-outs, the two men's desires and attitudes are always far more straightforward and easy to track, which makes them less of a dynamic star attraction than Catherine. That said, Oskar Werner and Henri Serre do an exemplary job of inhabiting Jules and Jim in a way that is so natural that it makes the audience feel like we're not even watching performances. They take the overgrown boys of the early scenes and seamlessly transform them into the older, wearier, but probably not much wiser men of the second half of the film. When an essentially emasculated Jules explains to Jim halfway through the film that he has given up on the dreams he once had for Catherine and himself, Werner's performance is heartbreaking because it is played so small and real.

Despite its numerous moments of melancholy, Jules and Jim can't help but linger in the mind as an energetic, joyful film. The rapid montage of the early moments generates enough power to fuel the rest of the film -- not to mention the careers of countless fans-turned-filmmakers ever since (it's hard to imagine large portions of the work created by Martin Scorsese, Wes Anderson, Paul Thomas Anderson, and Noah Baumbach, to name but a few, without the first ten minutes of Jules and Jim). And, of course, there are so many indelible images: Shoot the Piano Player's Marie Dubois using a cigarette to show Jules her impression of a steam engine; the foot race between the three main characters with Catherine, in her boyish drag, taking advantage of a false start; the series of freeze frames on Catherine as she laughs and looks mischievously at her men at the peak of their happiness; and then Catherine singing Albert's song, "Le Tourbillon" ("The Whirlwind"), right as things are starting to go sour. These are just the handful that first come to mind.

While some might argue the supremacy of other entries in Truffaut's filmography over Jules and Jim, it stands as a unique moment where Truffaut the film historian, with the encyclopedic knowledge of all that had come before him, collided with Truffaut the book lover, who wanted to see his favorite unknown story brought to light, and Truffaut the hot-shot filmmaker, who was no longer green but was still willing to utilize new cinematic vocabulary that had yet to be codified. In that way, Jules and Jim might be Truffaut's most perfect film.

The Blu-Ray
Like all of Criterion's new releases, Jules and Jim comes packaged as a Dual Format combo pack, with the film and supplements presented on both Blu-ray and DVD formats (in this case, one disc of the former and two of the latter). I did not previously own Criterion's 2005 DVD release to compare, but from the screencaps and other info I can find online, the DVDs included in this set are a newer transfer with new menus, but with the precise same allotment of bonus features from 2005 spread in the same fashion over the two discs. All of the identical bonus features fit snugly on the single BD.

The Video:
The AVC-encoded 2.35:1 1080p transfer is excellent. Cinematographer Raoul Coutard's brilliant black-and-white work is given a perfect showcase. Almost all specks and damage have been cleaned up, but not at the expense of the image's filmic structure, which is nicely textured with film grain. I noticed in my online research that there was some controversy about a few shots that had been reversed and/or incorrectly cropped in the 2005 release; those shots appear to have been properly rectified in this release.

The Audio:
The LPCM French mono audio is similarly splendid. Free from hiss, the soundtrack has been flawlessly restored, allowing the dialogue and Georges Delerue's classic music to blend effortlessly. Optional English subtitles.

Special Features:
As I stated above, these are just the copious extras that were already featured on Criterion's 2005 DVD release. But, to recount:


Final Thoughts:
Is it worth the upgrade to Blu-ray? Hell yes. DVD Talk Collector Series.