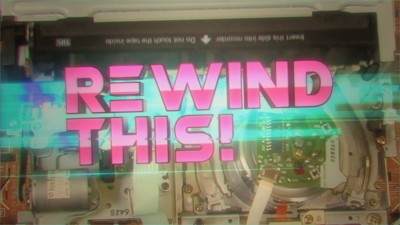 
The Movie
As a kid, I spent an inordinate amount of time at Video Plus, our local video rental shop. Though the place burned down early in my youth, never to reopen, to this day I can close my eyes and see the entire layout, from the children's section on the left of the store, with all the huge white clamshell cases of the many Disney films on display, to the horror section on the right, with their lurid covers, which I spent every visit perusing with wide-eyed curiosity and terror (not to mention that intriguing room with the curtain to the rear right of the store.) Walking up and down aisles, with a world of possibilities around you was the magic of VHS rentals, an experience that's hard to find in today's post-Blockbuster streaming home-video world. Sure the convenience and cost of Netflix is great, but it's just not the same.

Based on the stories shared in Rewind This!, this is the experience of a generation who grew up with that black bricks, and everything that came with it, including jammed tapes, re-recorded videos and the obnoxious need to rewind. But today, as the world moves away from physical media, the sense of nostalgia in those who remember the first time they saw the box for Faces of Death on the shelf is mighty. It's that audience, the ones who loved VHS when it was in its prime and continue to love it today, that are the stars of this documentary. The creators reached far and wide (while keeping something of a focus on Austin, Texas' epicenter of VHS love) to gather tape collectors, filmmakers from the era, industry leaders and retailers and those who still carry the torch, in order to tell the story of VHS in detail. 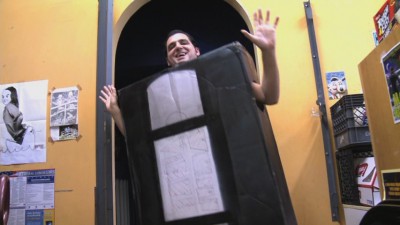 The roster of those interviewed is fun and enlightening, from entertaining personalities like Elvira herself, Cassandra Peterson, Basket Case director Frank Henenlotter and nutty indie auteur David "The Rock" Nelson, to home-video indie titans including David Gregory (Severin Films), Mike Vraney (Something Weird) Lloyd Kaufman (Troma Films) and Don May, Jr. (Synapse Films); theater programmers from Alamo Drafthouse and Cinefamily to bloggers and employees from legendary video store like Scarecrow Video in Seattle. Any movie that can boast interviews with director Atom Egoyan, Ghost in the Shell creator Mamoru Oshii and porn icon Bill Margold is covering all the bases.

The big names of the industry aren't the real draw though, as the people on the fringe who are keeping VHS alive are the most interesting subjects. The passion they hold for a format whose time has obviously passed is endearing, admirable and certainly a touch odd. They also provide a window into a variety of topics surrounding VHS, including the many titles that have never made the leap from tape to digital, the risk of losing content forever thanks to the unstable nature of magnetic tape and the lack of archiving in process and the battle between physical media and streaming, and how the future of home video could hand studios back all the control they lost since the introduction of VHS. Exploring the format's history, offering a chance to meet all these unique individuals and climbing into the middle of these important discussions is what Rewind This! does best in its free-flowing way, making it just what you want from a documentary. 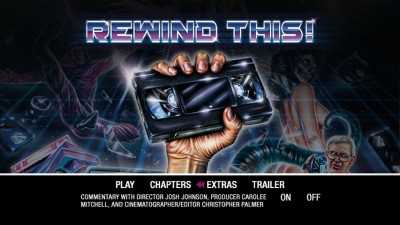 The DVD
This film arrives on one DVD, which is packed in a clear, standard-width keepcase. The DVD features a static, anamorphic widescreen menu with options to play the film, select chapters, adjust languages and check out the extras. There are no audio options, subtitles or closed captioning.

The Quality
The anamorphic widescreen transfer is a mixed bag, as it's pulling so much from a wide-range of time and an imperfect medium, and the source material carried that VHS look. Overall, the material shot for this film looks nice, with a clean image that sports appropriate color and a nice level of fine detail, though some of the footage, particularly the interview with Hobo with a Shotgun director Jason Eisener, comes off looking a bit rough. There are no noticeable issues with the transfer, but when it comes to all the source footage, who would know?

The Dolby Digital 5.1 audio track sounds fine, but don't expect to be blown away, outside of Josh Freda's era-appropriate score, which you might swear was by John Carpenter (and not the John Carpenter who is one of the producers on this film.) The separation is good between the subjects' voices and the music, and though the surrounds are used to boost music and some of the source material, there's nothing in terms of dynamic mixing.

The Extras
The main extra is an audio commentary by director Josh Johnson, producer Carolee Mitchell and cinematographer/editor Christopher Palmer. In a way, the track is like an aural version of the film, as the trio spend a good deal of time talking about the history of VHS and their thoughts on the matter, but they also discuss what went into making the documentary, especially the travel and wrangling of subjects, along with some brief technical notes. Info on material cut from the film is shared, as well as additional background on the more interesting subjects, make the track worth a listen for fans of the subject matter.

This disc does not skimp on the bonus footage, offering 17 clips that combined are actually longer than the film itself, checking in at just over 110 minutes. With the huge number of interview subjects featured in this film, there's obviously more content than could fit in the documentary, and this section lets you check it out in neat little packages. Much of it takes the form of extensions of what made it into the movie, but there are a few items that were excised entirely. If VHS and film history is your thing, having all these pieces to check out is a huge bonus.

Here's a breakdown of the clips:

The Bottom Line
The history of a media format doesn't sound like the kind of thing that would lend itself to an interesting documentary, but when that format was such a part of the lives of a fascinating group of people, and the topic has ramifications still felt today, it definitely works. Rewind This! will appeal mainly to film buffs and those with memories of store shelves overflowing with VHS tapes, but the people involved are colorful and the film maintains a rapid pace, making it accessible to anyone with an interest in film history. The quality is solid and there's a ton of bonus content, making it well worth picking up, even if only as a tribute to the heyday of physical media.