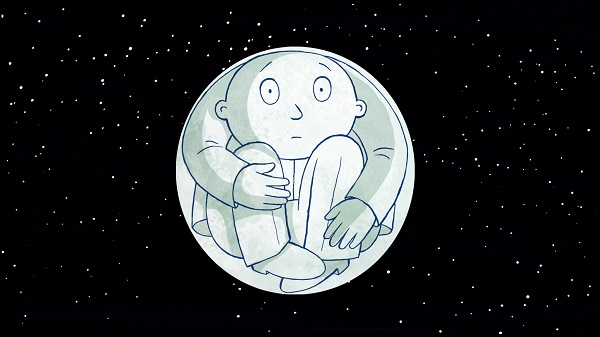 Moon Man is an offbeat animated film that is full of beautiful images, but lacking the narrative scope one would expect for a feature-length film. Based on the popular children's book by Tomi Ungerer (who also narrates), the film follows the man in the moon as he hitches a ride on a comet to Earth. Bored with his life in space, the Moon Man becomes delighted by Earth's natural wonders.

Meanwhile, Earth's nations have all come under the rule of a single power-mad president. Advised by a sultry woman whose red hair is magical (and who seems oddly like Melisandre, The Red Woman from Game of Thrones), the president decides that the Earth is not enough for him and that he needs to annex the moon next. When he learns that an extra-terrestrial has crash-landed, he fears there has been a preemptive strike by the moon's army.

The president goes to the inventor of everything, Dr. Bunsen van der Dunkel, to build him his own comet to go to the moon. Bunsen, being more intelligent, suggests building a rocket instead. As chance would have it, the Moon Man also comes upon Bunsen's home/workshop, and the inventor and extra-terrestrial become friends. Without the Moon Man up in the night sky to watch over them, the children of Earth find themselves unable to go to sleep, so Bunsen decides to use his rocket to send the Moon Man home, instead of sending the president on his less worthy mission.

I am unfamiliar with Ungerer's book, but I'm sure this story unfolds perfectly as a 40-page picture book. As a ninety-minute feature film, it's stretched pretty thin. While kids might get wrapped up in the colorful scenery and the mellow musical score (punctuated by a few rock cues, like "In-A-Gadda-Da-Vida," oddly enough), it might be hard to keep adults from falling asleep.

The film also seems to frequently ape Steven Spielberg's E.T. The Extra-Terrestrial, despite its source material being published fifteen years before Spielberg's film was released. Katharina Thalbach performs the Moon Man with a low grumbly voice that sounds very much like the odd-shaped squishy visitor who was so fond of Reese's Pieces and his buddy Elliott. Once Bunsen teaches the Moon Man a few words, and the Moon Man points at the sky and says the phrase, "Go home," the aural resemblance is undeniable.

It's hard to judge a film with a warm, optimistic attitude like this too harshly. Moon Man is never particularly terrible or particularly excellent. It is consistently pleasant throughout. 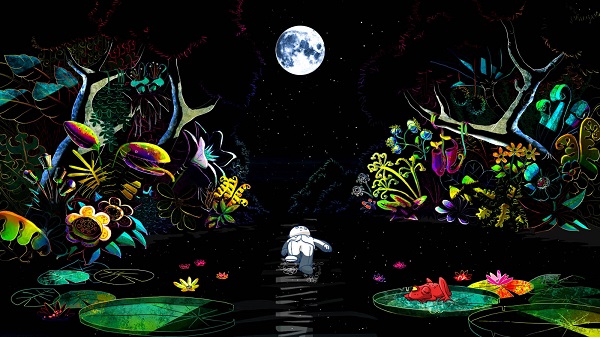 The Video:
The widescreen 1.77:1 image is nicely rendered here. The colors are extremely vivid, and the blacks are rich and inky. There are occasional instances where the lines appear jagged instead of smooth, but otherwise I noticed no significant video compression issues.

The Audio :
Moon Man is a German-French-Irish co-production. According to online sources, there are German- and French-language versions of the film, but this DVD only offers the Irish-accented English-language version. The soundtrack is presented as either Dolby 5.1 surround or Dolby 2.0 stereo. Both tracks are perfectly crisp, but oddly quiet. It reminded me a bit of an old-time radio show: when there is no dialogue or action-specific sound effects, the soundtrack goes silent. The 5.1 track nicely expands the jazzy score and source music cues, like "Moon River" and "Paper Moon."

Final Thoughts:
While a lot more care and attention has been put into the making of Moon Man than a lot of the cheap cash-ins aimed at kids, it still seems like it was a commercially driven decision to pad the story out to feature length. It is easy to imagine a less drowsy, equally charming 30-minute telling of this story being made. While I pine away for that imaginary version, this real-life version comes mildly Recommended. 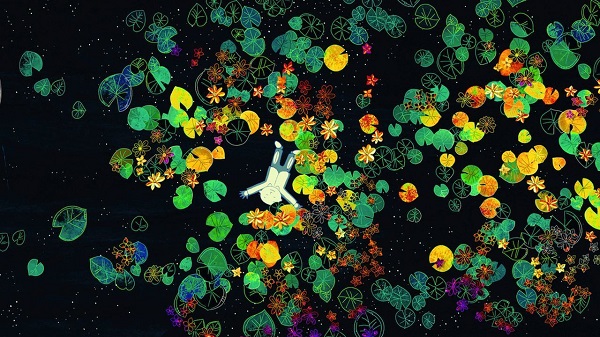