Raro Video // Unrated // December 3, 2013
List Price: $34.95 [Buy now and save at Amazon]
Review by Stuart Galbraith IV | posted December 3, 2013 | E-mail the Author
Sometimes a classic foreign film doesn't age well, and that seems to be the case of what's called General della Rovere on RaroVideo's spine but Il generale Della Rovere on the cover. This big, prestigious production directed by Roberto Rossellini and starring Vittorio De Sica won the Golden Lion at the 1959 Venice Film Festival (tied with Mario Monicelli's The Great War) and numerous other international prizes, and was nominated for Best Original Screenplay at the 1962 Academy Awards.

But I found it talky, a bit slow, highly predictable, and artificial, the latter an unusual complaint against the Father of Italian Neorealism. This artifice apparently springs from a specific desire to rush the film through production in order to have it ready for competition at the Venice Film Festival, a strategy that obviously paid off. But it's a handsome looking movie and De Sica gives an interesting, typically charismatic performance.

Another problem with Raro's General Della Rovere is the transfer. The Italian-French co-production was shot full-frame but clearly composed for widescreen exhibition, presumably either 1.66:1 (France's preferred format) or 1.85:1 (Italy's non-‘scope films) but here it's pillarboxed to 1.33:1 and the results are compositions where people frequently look like they are standing in two-feet-deep holes. (Criterion's 2009 DVD release was also 1.33:1.)

What's more, those doing the video transfer decided to expose every last molecule of picture information. The 1.33:1 frame has rounded corners while film dirt and hair trapped at the edges of the camera/printing gate are visible throughout. Wartime newsreel-type footage is integrated into the story, and on some of that the edges of the sprocket holes are even visible, for cryin' out loud.

Presumably somebody felt this transfer extremism serves the interests of the filmmakers but exactly the opposite is true. They were composing shots for widescreen exhibition and with the realization that even when the film eventually made its way to TV a lot of picture information was going to be lost on all four sides. Though impressively sharp the presentation does not really resemble what 1959 audiences saw and it all but ruins the original framing. 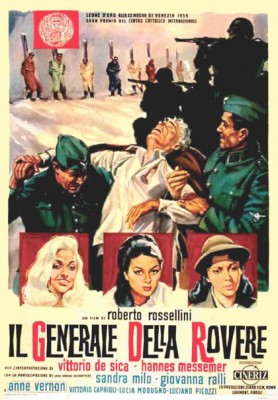 The movie is notably episodic. Emanuele Bardone (De Sica) is a charming older man pushing 60 in Nazi-occupied Italy. A chronic gambler, he funds his addiction by preying upon neighbors and strangers whose loved ones have been arrested by Germans authorities for various supposed crimes. Bardone freely socializes with his Nazi occupiers, posing as a retired Colonel from the Great War. Meanwhile, Bardone's victims assume he's using this time to negotiate their loved ones' release.

Eventually his cons catch up to him. He's gambled all their money away and made little progress because actually trying to help his compatriots is never more than a secondary concern. Caught red-handed, S.S. Col. Müller (Hannes Messemer, later Stalag Luft III's commander in The Great Escape) offers Bardone a choice: impersonate dead Italian Resistance figurehead General della Rovere in a Milano political prison, as a decoy intended to trap "Fabrizio," the code name for the real Resistance leader, or face a firing squad. Bardone chooses the former.

Naturally, General della Rovere pivots on the moral choices Bardone is confronted with once in prison, where his fellow inmates are tortured while he enjoys VIP treatment. The prisoners all accept him, an amoral swindler, as the almost deified della Rovere, remaining fiercely loyal to the Kagemusha-like imposter, even as he betrays them again and again, if with increasing reluctance. Fifteen years after the war's end, Italians were more open to fact-based dramas acknowledging fascist (or apolitical) countrymen who collaborated with the Nazis, but this isn't nearly as fresh and daring as it must have seemed 55 years ago.

Raro presents two versions of the film, the 132-minute theatrical version and Rossellini's original 140-minute cut, apparently the version that won that Golden Lion. I watched the long version, and while always interesting I also found it rather slow, stagy and not terribly cinematic. Characters have long chats in German offices, cramped apartments, brothels, and coffee shops and it's up to the actors to maintain interest, which for the most part they achieve. Besides De Sica, German actor Messemer, speaking Italian much of the time, is very good; French actress Anne Vernon, obviously dubbed, is okay as Bardone's latest pigeon, aware from the start that she's likely being conned. And familiar character actor Vittorio Caprioli, usually in comic roles, plays it straight here as the prison's barber.

Some of this un-cinematic look seems the result of specifically targeting the Venice Film Festival and rushing the production to complete it on time. Instead of real exteriors, the film for the most part utilizes expansive and highly detailed but ultimately very artificial looking studio sets, with distractingly unreal painted backdrops often visible. While acknowledging this was done to meet the Venice Film Festival date, liner notes try making the case that Rossellini deliberately opted for an "accentuation of falseness," to make the movie resemble some kind of fable and to contrast "the falseness of the set vs. the truth of the archive footage," but I'm not buying that. No. During the 1950s especially it was not uncommon for acclaimed directors to specifically target festivals in Venice and Berlin (among others) as a route to wider foreign distribution and personal acclaim, and oftentimes the movies that resulted were colorful but lesser works. (The Japanese director Kenji Mizoguchi is another obvious example, with films like Princess Yang Kwei-Fei.) Most of Rossellini's recent films hadn't done well financially, and General della Rovere was a cagey return to settings and themes found in earlier, greater successes.

General della Rovere is a problematic transfer for reasons described in more detail above. The image is often impressively sharp and detailed with excellent blacks and contrast, but the wrong aspect ratio and taking the viewable image to the very edge of the film gate does far more harm than good. The box lists the transfer as being derived from an "original 35mm negative print" while the subtitles at the head of the film call it a "positive safety print," but either way it sure looks great in terms of blacks and high-def detail, if dead wrong in other ways. In Italian and German with English subtitles, the DTS-HD 2.0 effectively mono audio is fine. And, also noted above, the Blu-ray disc contains two cuts of the film in addition to all the supplements.

The plentiful list of supplements includes a detailed if not entirely persuasive booklet essay by Adriano Apra along with a Rossellini biography and filmography. The disc itself includes a 40-minute interview with Apra; a 32-minute archival Rossellini interview; a three-minute Aldo Strappini (RaroVideo) interview; a 45-minute video essay, "Truth or Fiction": and an original theatrical trailer.

Fairly good but dated and compromised by transfer issues, other aspects of General della Rovere compensate, particularly star Vittorio De Sica's leading performance and all those extras noted above. Recommended.