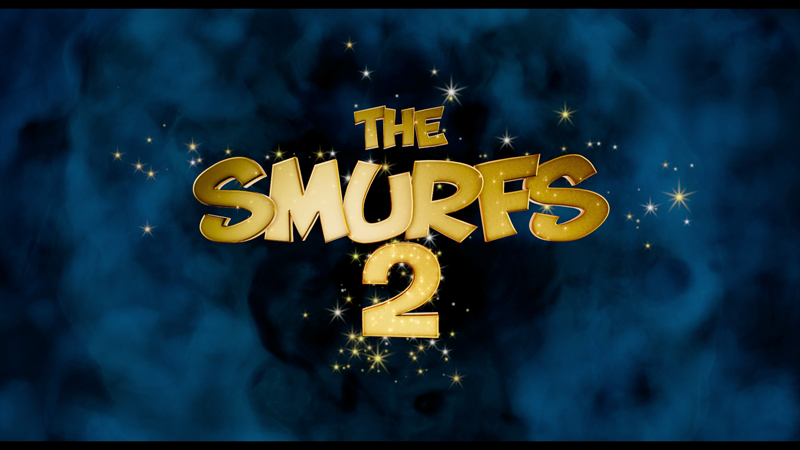 
The Story So Far...
The Smurfs, little, magical, blue forest creatures, were a phenomenon in the ‘80s thanks to their popular TV cartoon, but eventually they drifted away. In 2011, they had a big comeback with a feature film that mixed live action and CG animation, powered by a cast full of celebrity voices and Neil Patrick Harris and Hank Azaria as the human leads. The movie was released on Blu-Ray and DVD in December of 2011, and DVDTalk has a review.

The Movie
The first Smurfs movie was an amusing, well-made, but ultimately disposable distraction that lived on the likability of its live-action cast, including Harris, Azaria, Jayma Mays and Sofia Vergara, while the Smurfs were voiced by an all-star group featuring Katy Perry, Fred Armisen, John Oliver, Jonathan Winters, Anton Yelchin and many more. From what I can remember of the lengthy first film, the movie was split into essentially two plots, one featuring Patrick (Harris) and Grace (Mays) and their interactions with the Smurfs, which is tied to Patrick's concerns about their impending parenthood, while the other pits the Smurfs versus the evil wizard Gargamel (Azaria) and his plans to take over the world.

This time around, the film follows the creatively-unnecessary sequel formula of taking the characters and placing them in a foreign country (see Bad News Bears Go To Japan, Cars 2, etc.) Gargamel, using his otherworldly powers, has become the most popular magician in the world, and has set up shop in Paris, France, where he has fabricated Smurf-like creatures called Naughties. Using his new creations Vexy (Christina Ricci) and Hackus (J.B. Smoove), he manages to kidnap Smurfette (Perry), as part of his plan to get enough of the Smurfs' essence to take over the world. Her disappearance leads Papa Smurf (Winters) to lead a small squad of second-stringers, including Vanity (Oliver), Clumsy (Yelchin) and Grouchy (George Lopez), into danger to find her.

The decision to take only a trio of Smurfs for the mission unfortunately leaves plenty of entertaining Smurf voices on the sidelines for much of the film, like Alan Cumming and Fred Armisen, along with newcomers Jimmy Kimmel, Shaun White, Mario Lopez and Shaquille O'Neal. Meanwhile, what is the point of getting a quality actor like Smoove if you're just going to have him act like a drooling idiot for the entire movie? It honestly could have been just about anyone behind that dumb character. Hell, you already had Shaq in the booth. He could have easily done double duty. 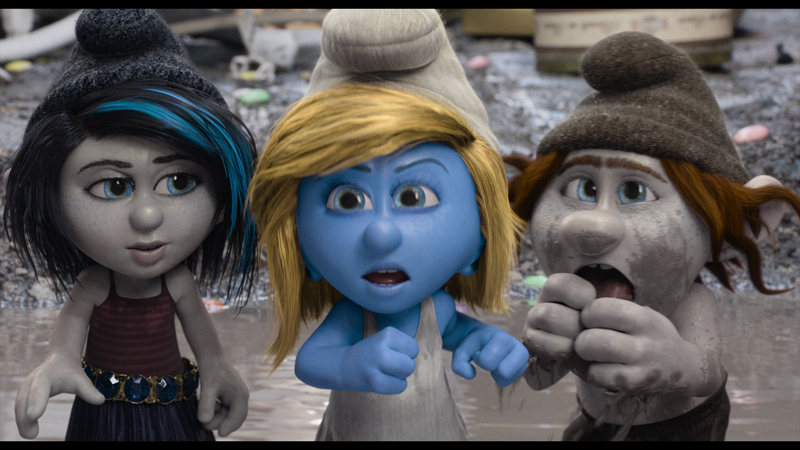 Thankfully, the best part of the first film, namely Harris and Mays, returns, drawn into the hunt to save Smurfette by their little blue friends. Like the Smurfs, there have new members of their family, with their son Blue now a few years older and Victor, Patrick's step-father, along for the ride. That role introduces Brendan Gleeson's boisterous corn-dog salesman to the franchise, who helps push Patrick a bit and establish the source of his daddy issues, which carry over into this sequel. While it's still mainly a goofy, family-friendly comedy full of fart jokes and bad puns, the attempt to create parallel storylines between Patrick and Victor and Smurfette and Papa Smurf is commendable on the part of the five-man writing team, even if they deliver it with the subtlety of a smack in the face and the sentimentality of a Hallmark movie.

The key word here seems to be more, as there's more activity for Smurfette and Grace to take part in, more with Gargamel's cat Azrael (a fun improvement) and more dialogue for Oliver as Vanity. Other than that, this film is quite similar to its predecessor. You've got your frequent music/action montages, several meta jokes speaking to the Smurfs' awareness of their situation and lines aimed at adults that are likely to leave kids wondering what's going on. As a result, the movie is more entertaining for the adults watching, but kids are likely to hit some slow patches, which is a major issue for a film that clocks in a bit shy of two hours long. As the Smurfs would likely joke, shorter is sometimes better. 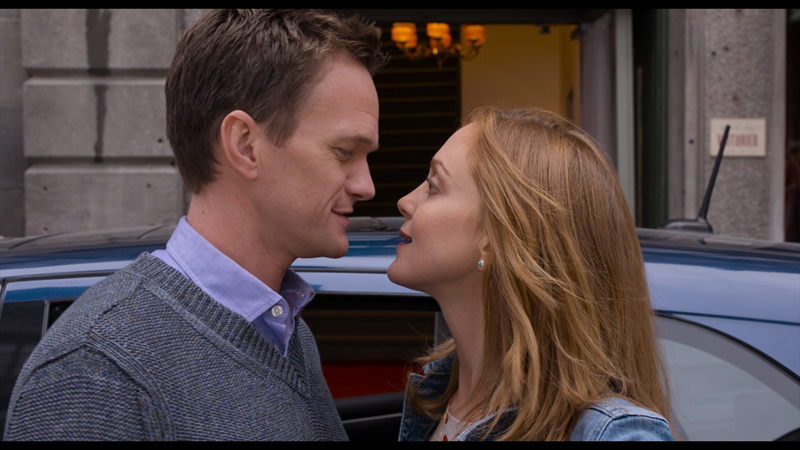 The Discs
The film arrives on a Blu-Ray disc and a DVD, in a standard-width, dual-hubbed BD keepcase (in an embossed slipcover) with a a few promotional inserts. The Blu-ray sports an animated menu offering the option to watch the film, select scenes, adjust the subtitles and check out the extras. The disc offers audio in English and French DTS-HD Master Audio 5.1, Spanish Dolby Digital 5.1 and English and French 2.0 Audio Description tracks, while subtitles are available in English, English SDH, French and Spanish.

The Quality
Like last time, the Smurfs bring out the best in Sony's authoring, with a 1080p, AVC-encoded transfer that bursts with vivid color and fine detail, while never betraying the film's blend of live-action and animation. No matter the setting, of which there is quite a variety here, skintones are spot-on, black levels are solid and digital distractions are never evident, despite the frequently manic action on-screen. If nothing else, the Smurfs look terrific on the appropriately-named Blu-ray.

This isn't just a visual feast, as the 5.1 DTS-HD Master Audio track is outstanding, delivering all its aural elements clearly and with appropriate punch, whether it's a well-placed sound effect, crisp dialogue, effective score or the ever-present atmospheric effects that create the enveloping Smurfs world, while the low-end kicks in to emphasize the action. Between the video and audio, this is an all-time classic presentation.

The Extras
Disappointingly, the extras have been reduced for this sequel, starting with a drop from two commentaries to none, which is a shame considering how good they were last time. Instead we start out with a set of five deleted scenes, running 3:53. None of these would have added anything to the film as they feature throwaway gags, two of which are essentially the same.

The featurettes kick off with the creepily-titled "Daddy's Little Girl: The Journey of Smurfette" (6:22). Through interviews with the producer, director, writers and Perry, the changes to the character, Perry's performance and Smurfette's arc is explored, though calling the role complex, as Raja Gosnell does, is pushing it. It's followed by "Animating Azreal" (3:25), a brief look at how the cat came to life in the film, via raw footage and behind-the-scenes peeks. It's worth checking out to see how the effect was achieved. There's more about Azrael in "The Puurrfect Companion: Azrael's Tail" (BR exclusive, 4:40), which expands the scope a bit wider, covering his voice and character as well, with Azaria chiming in on his furry castmate.

The new pseudo-Smurfs get a pair of extras of their own, with "The Naughties! The Tale of Hackus and Vexy" (BR exclusive, 5:42) and "Evolution of the Naughties" (BR exclusive, 3:41). The first focuses on the introduction of the new characters, some background info and their role in the film's plot, along with an opportunity to see Ricci and Smoove in the recording booth. Smoove is more entertaining here than he is in the entire film (of no fault of him own.) The other is more technical, showing the stages of development of the character models via walk and run cycle tests and rough animation.

Last time a third disc offered a DVD of the Smurfs' Christmas special, but this time the mini-movie has been integrated with the Blu-ray, so it's in HD (and looks brighter and sharper, though that makes the outlines look a bit rougher.) The odd thing is, it's a Halloween-themed 20-minute, 2D special, The Legend of Smurfy Hollow (BR exclusive), which makes it either about a month late or about 11 months early. If you're interested in learning more about this short, check out my review of the previous DVD release.

This disc offers up a sync connection with the Smurf-O-Vision 2 app, which is available on iOS devices. With the first film, this connectivity allowed for a second-screen experience that wasn't bad. This time around it's about unlocking the movie-making capabilities of the app, as syncing with the Blu-ray gives you more characters, art and sound to use in the app. You earn these materials by playing a game where you watch for characters to appear on-screen and then tap them on your iOS device. It moves quickly, so it's not super easy, and should keep kids interested, especially when you start making movies using your own voice.

Also included is a group of seven Sony trailers along with an access code for an UltraViolet copy of the film. 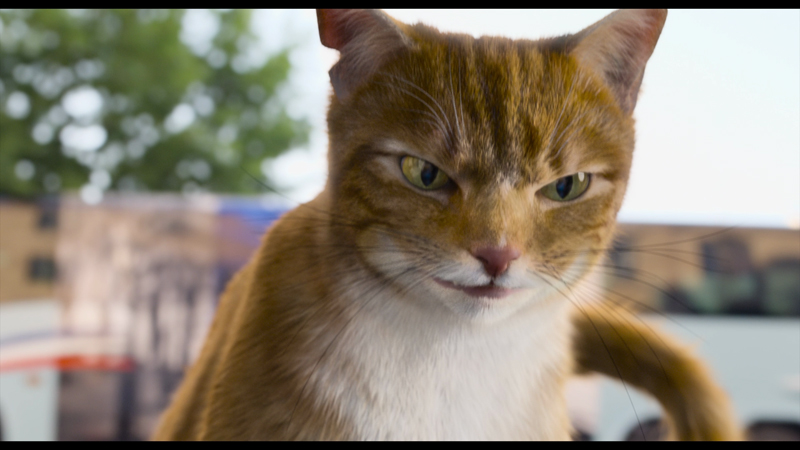 The Bottom Line
The Smurfs 2 takes the first film and embiggens it, resulting in improvements in spots but just more of the same in others. The resulting film still suffers from the same issues with imbalance though that hurt the first movie. However, the presentation remains remarkably high in quality, even if the extras, while sometimes good, aren't as impressive this time. Little ones will probably want to give it a look, but it's not likely to become a regular resident of your Blu-ray player.