Out of the Furnace 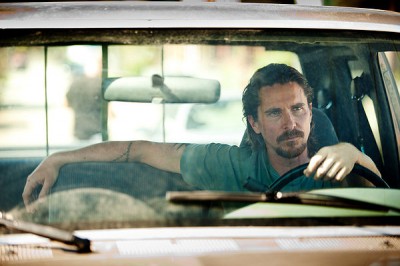 Male rivalries dominate Out of the Furnace. Daniel Plainview's famous quote from There Will Be Blood, "There's a competition in me," could be applied to just about every man in this particular drama--though, Woody Harrelson's Harlan DeGroat maybe one-ups even ol' Daniel. When asked by Christian Bale's Russell Baze if DeGroat has a problem with him, the bad man responds, "I've got a problem with everybody." Best get out of his way, he solves his problems with his fists.

Bale leads the masculine cast as a quiet mill worker in small-town America. His father is dying of chronic ailments, and his brother Rodney (Casey Affleck) is about to go off on his fourth tour of duty in Iraq. The story begins just before Barack Obama's first election, and then jumps ahead several years. Daddy is gone, Rodney has just come back, and Russell has lost the time in between to a prison sentence, earned through bad luck and bad choices rather than malice or evil intent.

While Russell emerges back into the world a more sober man, his little brother has picked up a lot of anger and bad memories from his time in the service. To make ends meet, Rodney's started bare-knuckle boxing in underground fights, working with the local bookie (Willem Dafoe), whom he is in heavy debt to. Rodney is a good fighter, but a little too good. When he's supposed to take a dive, he instead gets lost in the moment and beats the living hell out of his sparring partner. After he prompts the bookie to get him a match in DeGroat's ring in the mountains across state lines, Rodney is warned that the man holding the purse strings is not someone he should cross. If DeGroat insists you lose, you lose.

Without giving too much away (or at least no more than you can see in the trailer, which really does not tell the entire story, no matter how it looks), Rodney does not come back from that bout. The local sheriff, Wesley (Forest Whitaker) knows that DeGroat is responsible, but jurisdiction is an issue, there is not much he can do for Russell and his surviving family member, an older uncle (Sam Shepard). Russell takes this personal, especially since his girlfriend (Zoë Saldana) left him for Wesley while Russell was in prison. He thinks Wesley is junking the case on purpose. See what I said about competition? Even Russell and his uncle joke about who is a better shot while on a hunting trip. It's all about who has the steadiest gaze and the most assured hand.

And I mean all of it. Most of the confrontations--and there are many in Out of the Furnace--involve two men, toe-to-toe, staring each other down and trading choice words. First to blink may get a sock in the jaw. Or a kick in the ribs. Or a gun to the head. These things escalate.

Out of the Furnace is the second feature from Scott Cooper, who made a splash a couple of years back with Crazy Heart. The director works here from a script he rewrote. (The other credited author is Brad Ingelsby, who apparently is currently at work on the Hollywood remake of The Raid). Despite all of the pulpy plot details, Cooper's film is of serious intent. Out of the Furnace is a picture about the American heartland, about the way the system lets people down and what they do in response. It's about entrenched ideas and the stubbornness that impedes progress. The plant is closing, opportunities are drying up, and so you make your own; likewise, when the law can't get things done, you get a rifle and go looking for the fellow who did you wrong. 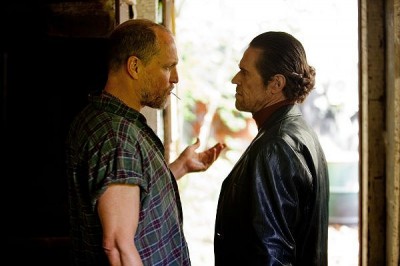 It makes for an intense movie. Then again, with that cast, how could it not be? Everyone is in top form here. Harrelson is downright evil, and Affleck proves he can also be a formidable heavy. The actor is fierce and frightening in the fight scenes. Together, they are both such hard-chargers, it actually allows Bale to dial it down a bit. His intensity is about how much he holds back. This is not to say that Out of the Furnace is merely about anger and lacks any other heart. Family bonds are also shown to be strong, and Russell's relationship with Lena has a lot of depth to it, even though we only see them on either side of their lovers' divide. The painful reunion scene between Bale and Saldana is devastating.

Yet, there is also something lacking here. There is nothing really to grouse about when it comes to Out of the Furnace, but that's also kind of the problem. Things fit together nicely, the story flows, and everything is tuned just right. Like another story of brothers and family history from earlier this year, Derek Cianfrance's A Place Beyond the Pines, Out of the Furnace is maybe trying too hard to replicate the look and feel of a 1970s drama. Scott Cooper adopts a bit of Michael Cimino, and a little Terence Malick, but I am not sure how much of what we are seeing is actually him. Precision is traded for depth. Whereas Andrew Dominik's Killing Them Softly used similar film styles and current events to infuse his genre picture with social commentary, Cooper's could be at any time in any place. It's all genre generics.

Which doesn't stop it from being either good nor entertaining. Out of the Furnace is still a worthwhile film, whether you're watching it for the gorgeous photography of Masanobu Takayanagi (The Grey, Silver Linings Playbook) or just to witness how an exceptional ensemble vibrates together as one solid acting engine. Just don't expect to walk away from Out of the Furnace with anything greater than that. It's a movie that kicks up a lot of dust, but once the dust clears, you're only left with stale air. 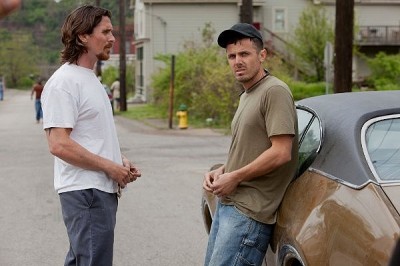