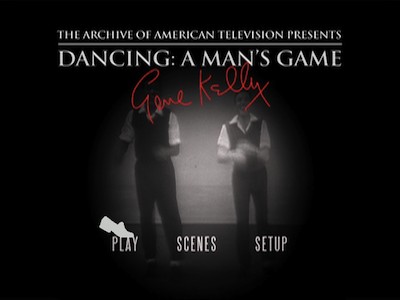 What an incredible thing the Omnibus television series was. 164 episodes ran from 1952-1961, each week offering special programming focusing on the arts, sciences, and human interest. It was hosted by British journalist Alistair Cooke and broadcast live. The elaborate nature of these shows is astounding to behold, and Cooke and his crew pulled it off week after week.

One of the many stand-alone segments from the late 1950s is isolated here, a unique one-off program titled Gene Kelly: Dancing, A Man's Game. The movie star and director has gathered together a gaggle of dancers, musicians, and athletes to illustrate the fundamental components of his chosen art form. Kelly both hosts and demonstrates, allowing his feet to do the talking when it best serves the presentation.

Dancing, A Man's Game is broken into two parts. The first features Kelly alongside renowned sports stars like Mickey Mantle (baseball), Johnny Unitas (football), and Sugar Ray Robinson (boxing) to show how different athletic disciplines require similar control of muscles and movements and can be incorporated in dancing. Unitas demonstrates how to throw and tackle, and Kelly's troupe mimics his routines. In one excellent bit, Kelly himself incorporates boxing, basketball, tennis, baseball, and football into one complete piece of choreography. In another, Sugar Ray demonstrates that he can keep up with the famous hoofer in tap dancing. Boxing, after all, requires rhythm.

The second part of Dancing, A Man's Game is more of a history of American dance, including how jazz influenced tap dancing, bringing together both African American traditions and traditional Irish jigs. Kelly argues that dance isn't just a manly discipline, but also an art that comes from the street. The program ends with a final number set to the music of George Gershwin.

It's a fascinating program, and should be of particular interest to aficionados of classic musicals. It could also be used as a good primer to sway those prejudiced against the genre. There is no more convincing advocate for the form than Gene Kelly, and credit to Omnibus for allowing him the use of their extraordinary platform. 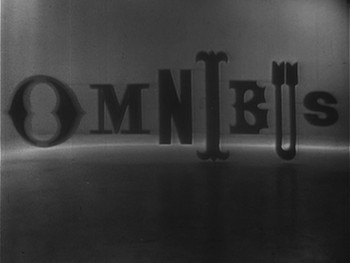 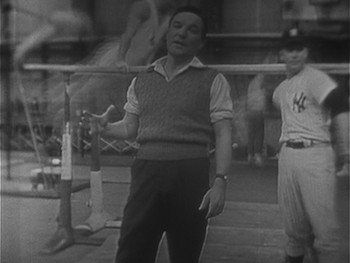 Video:
Entertainment One and the Archive of American Television have released this Omnibus disc as a full-frame black-and-white release. Image quality is very good, though not necessarily up to the standards we would expect from a DVD of a more recent TV show. This is, of course, understandable, as live broadcasts from the 1950s were not recorded in the way they are now, so resources are limited. The source used for the disc has one or two glitches, and the picture isn't exactly crisp (some soft outer edges, jagged lines. Etc.), but the producers have otherwise done a fine job of digitizing and preserving this historic television program.

Sound:
The sound is mixed in mono and is of similar quality to the picture. It is clear and mostly free of problems, though not entirely vibrant by today's standards.

Subtitles for the deaf and hearing impaired are included.

Extras:
An extensive booklet featuring information about the broadcast.

It's also worth noting that the show's original commercials are not included, even though we do see Cooke throw to the ad breaks.

FINAL THOUGHTS:
Highly Recommended. Gene Kelly: Dancing, A Man's Game is an hour-long segment from the 1958 season of Omnibus, a live broadcast where the famous movie star shows the athleticism and evolution of his chosen art form. Featuring a bevy of sports stars and other special guests, the show convincingly and entertainingly outlines how it takes real training and special skill to be a dancer. It's an essential viewing for any fans of movie musicals, and sports fans, as well. 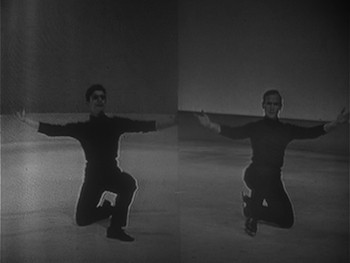 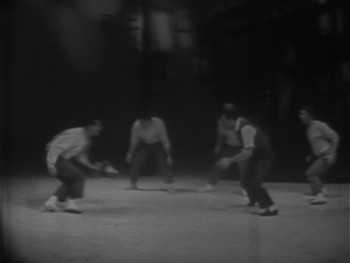