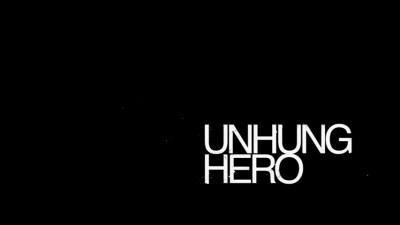 
The Movie
So here we've got Patrick Moote, a comedian and actor with a few minor roles. His biggest fame came thanks to the Internet though, as a video of him proposing to his girlfriend at a UCLA basketball game, and being swiftly and embarrassingly rejected went viral. The reason for the shut-down led to this documentary, as it was allegedly due to him being underendowed in his genitals. Besides the awful things that says about her decision-making processes, it stung Moote, who then teamed with director Brian Spitz to explore the importance of the size of the penis.

Sort of Elijah Wood-like, Smoote is charming and self-deprecating as he searches for answers to his crotch concerns, though it quickly becomes clear that the quest is unlikely to reach a satisfying conclusion, as he consults exes, doctors and sex experts in order to determine an average penis size and what someone with smaller equipment can do about it. Whether it's the blunt memories of his junk offered by former friends or his efforts to extend his "reach" through tools, pills or exercise, the film is often a cringe-worthy affair, perhaps never more so than when he discusses the matter with first his mother and then his father. 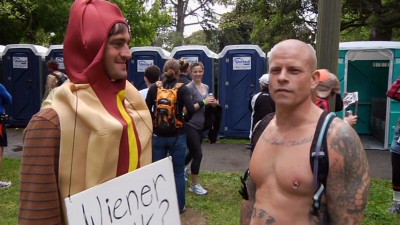 Though most of the techniques explored will be known by viewers through their ubiquity in pop culture, like Extenze pills and the various pumps he tries, there are a few things to learn about, especially when Moote takes his search overseas, visiting Malaysia, Korea, Taiwan and New Guinea. The lengths he goes to to try and get larger are pretty depressing, especially when he explores having a likely unlicensed "doctor" inflate his penis with oil injections. Things lighten up thankfully with appearances by several entertaining experts, featuring a handful of porn stars, including Ron Jeremy, sexologist Annie Sprinkle, commentator Dan Savage and Jonah Falcon, the man with the world's largest penis.

Though there's a lot of interesting and/or entertaining moments in the 84-minute film, like Moote visiting an odd festival in San Francisco, a (possibly faked) fight in a sauna spurred by a hidden camera and a horrific on-screen glimpse of surgery, several parts feel manufactured, like a subject who coincidentally pops-up at several points becoming a key part of the film. If this actually happened as portrayed, the filmmakers are incredibly fortunate. Meanwhile, the final stretch of the film is overwrought as Moote deals with the reality of what he's learned and experienced. As a result, there's a lack of naturalness to the way the film wraps that hurts its authenticity. Also lacking is the payoff many will be looking for is a look at the subject's shortcoming. Though we see many examples of the variety in penis sizes, the one we are asked to invest time in remains a mystery when the credits roll. 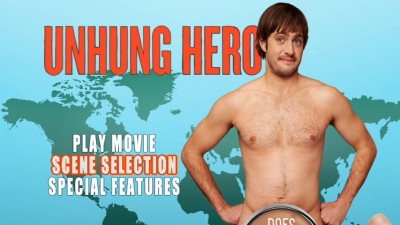 The Disc
Unhung Hero arrives on one DVD in a standard keepcase, and features a lightly animated anamorphic widescreen men with options to play the film, select scenes and check out the extras. There are no audio options or subtitles, but closed captioning is included.

The Quality
Unhung Hero utilizes a lot of different video sources, from blurry, pixelated web video to less pixelated GoPro clips to crystal clear DSLR high-definition footage, so the film is a mixed bag visually. The new stuff shot non-guerrilla-style for the film is consistently solid, but when some lighting is utilized, the results are tremendously better (as see in the confessionals.) There aren't any real issues as far as digital distractions go, and color is good across the board, depending in the quality of the source material.

The film is presented with a Dolby Digital 5.1 track, which offers up clean, clear dialogue from the center channel, while the surrounds tackle the music, which shows up from time to time. Other than that, the additional 4.1 channels are just along for the ride. What's here sounds fine, but keep your expectations low.

The Extras
The big extra is a feature-length audio commentary with Moote and director Brian Spitz. It's a bit like watching someone's home movies with them talking about it. Being friends, the participants' commentary is very conversational as they share their thoughts about what's happening on-screen, and they also offer some additional notes not seen on-screen along with info about people who helped them with the film.

Four deleted scenes are up next, running a total 13:36. It's an odd mix of moments that were cut from the film. including a moment with a small-penis support group, a chat with a sex expert, a visit to a Korean fish market and a tasting of an herbal treatment in Papua New Guinea. It's all very superfluous to the film, though the sex expert is somewhat entertaining. Also cut from the film are a pair of extended interviews with Savage (8:05) and Falcon (4:33). While Falcon is more philosophical about penises and purpose, sharing from his own experience as the owner of a large endowment, Savage leans more to the entertaining, even as heintelligently compares men and women and their histories with body criticism.

Aside from the commentary, the largest extra is a 22:23 Q&A with Moote and Spitz from the Traverse City Film Festival. They answer several questions, including an explanation of the sauna scene, though some bonus content mentioned here didn't make it to the disc.

Also included is a 1:40 photo gallery, a trailer for the film, and several other trailers. 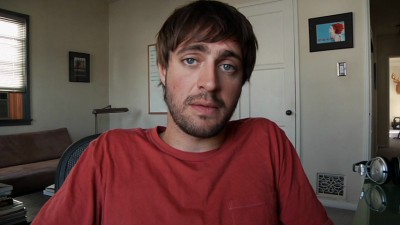 The Bottom Line
A mix of personal story, anthropological study and freak show, Unhung Hero is never boring, and Moote is a subject you can get behind as he tries to overcome the hand he's been dealt in life. However, in the end, the film loses its sense of authenticity, which hurts the overall package (no pun intended.) We received a screener, so we can't say much about the disc that's in stores, but the movie is worth a look.