Guest House Films' DVD release Green Briefs follows 2012 discs Black Briefs and Blue Briefs in their series of gay-oriented shorts loosely grouped around a central theme. As with the earlier discs, these "5 Gay Short Films Filled With Family Drama" frame subjects that impact gay life in an inclusive, broadly appealing way. While the people behind these five shorts are to be commended for delving into subjects like teen bullying, elder care, and the adoption process, the clunky results make this Briefs the weakest of the three. None of the films really stand out in a stylistic or storytelling sense, and their mostly earnest, serious messages go over with varying degrees of success.

The six short films presented on Green Briefs are as follows: 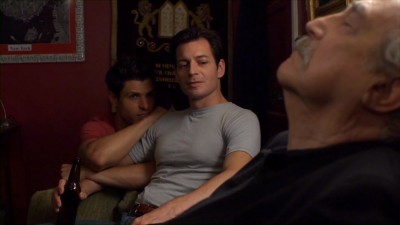 Pride (Directed by Marc Sattarelli; 22 minutes)
On the day he's all set to host his annual Pride party, Stephen (Perry Laylon Ojeda) is confronted with his past and forced to re-evaluate his life when his elderly, dementia-ridden father, Anthony (James Karen), is dropped off at his door. While Stephen receives a call from his exhausted sister, Angela (Pauley Perrette), and wonders what to do, Anthony is welcomed into the home by Stephen's partner, Carlos (Andy Martinez, Jr.), and the fabulous shindig proceeds as planned. As the couple's funky friends open up to this mute stranger in their midst, Stephen begins the process of re-evaluating the homophobic man who violently threw him out 20 years earlier. Pride's silliness and often trite dialogue is redeemed with excellent acting from Ojeda and Martinez (believable as a couple), and a heartbreaking turn by veteran actor Karen (Poltergeist; Superman Returns) as the dad. Actress Susan Blakely (The Towering Inferno) has a bit as one of the party guests pouring out their souls to Anthony. 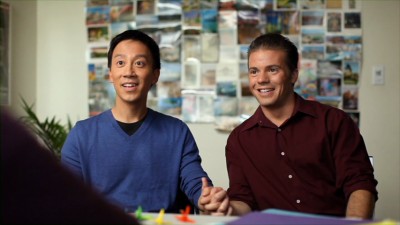 The Commitment (Directed by Albert M. Chan; 20 minutes)
Inspired by the emotionally taxing process of adoption in his own life, Albert M. Chan wrote, directed and acted in this contemplative, tear-jerking drama of a mixed-race gay couple attempting to start a family by adopting an unborn baby. Chan's Robert and his long-term partner, Ethan (Jason Lane Fenton), are called in for an appointment with their adoption agency case worker, Susan (Mary Niederkorn), to meet the young mother who agreed to bear their child. Although the guys' chat with Victoria (Kerri Patterson) starts off on an awkward note, Robert and Ethan come away relieved and excited after locating a birth mother who can give them the kind of child they envisioned (like Robert, Victoria is Asian-American). Unfortunately, their plans are shattered when Susan later informs them that Victoria decided to keep the baby for herself. The devastating news prompts Robert and Ethan to look inward, re-evaluating whether they're prepared to add the burden of raising a kid to their still-developing relationship. Chan's script is hokey at times, yet the emotional rawness of the real-life situation comes through nicely, highlighting with a couple of intimate, understated scenes between Ethan and Robert. Sure, it failed to make me cry, but the heartbreaking intensity of this story may bring out a tear or two in others. 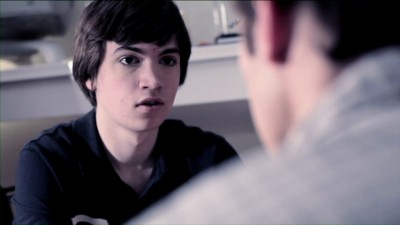 Shabbat Dinner (Directed by Michael Morgenstern; 14 minutes)
Issues in gay Jewish families don't get depicted in film often enough. Base on the shoddy, contrived goings-on in Michael Morgenstern's short Shabbat Dinner, however, maybe that's all for the better. The story centers on a boy named William Shore (Chris London, good in his first on-camera acting job), a jaded teen who is none-to-thrilled that his upper-class New Yorker parents are holding their annual Shabbat dinner at the cramped apartment they share. For the festivities, William's parents (Michael Wikes and Eva Kaminsky) have invited over a hippie-ish couple from their synagogue whom they barely know. Upon the arrival of the Bernstein-Cohens (Peter Tedeschi and Dawn Yanek), William is surprised to find that they brought along their teen son, Virgo (Dan Shaked). While the adults gab and politely argue over various issues in the living room, William reluctantly hangs out with Virgo in his bedroom - and eventually finds out that Virgo is gay. For the closeted William, Virgo's matter-of-factness about his sexuality arouses his curiosity (and a few other other things). This was meant to be a lighthearted comedy of errors, but the trite script makes it more like a bad Off-Off-Broadway play. Except for Chris London as William, the acting is terrible, and the production's humbleness isn't helped by the director's constant use of claustrophobic close-ups. 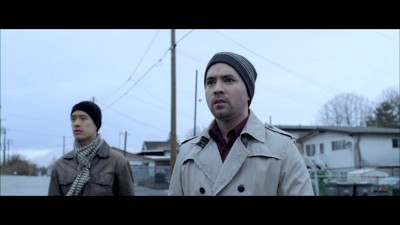 Kimchi Fried Dumplings (Directed by Jason Korman; 14 minutes)
The understated Canadian short Kimchi Fried Dumplings explores what happens when a mixed-Asian man brings his new (white) boyfriend home to meet his family during the holidays. Apprehensive about seeing the family again after moving across the country, Carl (Brent Hirose) is assured by his partner, Tim (Brad Harder), that everything will turn out right. Along with Carl's straight-laced middle brother Daniel (Ed Fong), married to a white woman and father to an adorable little girl, the household includes Carl's eccentric Chinese mom (Tisha Nixon), an ailing father (Al Dales), and Carl's youngest brother, Adam (Kyle Toy), who is seething with resentment over being left behind to care for their parents. In this true-to-life story, an unexpected accident forces Carl and Adam to have a hard look at their roles within the family. A project better in idea than execution, the film seems to coast along on the uniqueness of the Canadian-Asian family with nothing much else to prop it up. The characters themselves aren't terribly interesting, the plot follows the usual "home for the holidays, everything goes wrong" template, and the acting is underwhelming. On its own modest terms, it's a mildly enjoyable diversion, however. 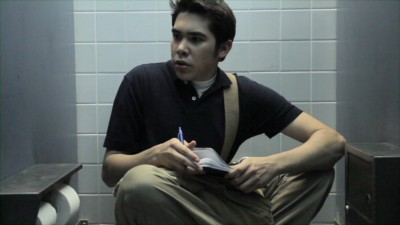 The Symphony of Silence (Directed by Cedric Thomas Smith; 40 minutes)
In this dramatic short written and directed by Cedric Thomas Smith, the consequences of teen bullying are handled with heartfelt sincerity (and not much nuance, unfortunately). A sensitive, loner gay teen low on his high school's social totem pole, Zach (Ben Carlee) spends his lunch hours in the confines of the boy's bathroom stall. Overhearing a trio of bullies tormenting a fellow student for being fat, Zach huddles in the stall knowing that, if he acts out, they'll come after him as well. It turns out that Zach has a good reason for avoiding conflict - one of the bullies is his older brother, Sean (Anthony Guajardo). Zach and Sean's concerned, hard-working parents (Veronica Orosco and George Cisneros) strive to keep harmony in the household, but the school's forced pecking-order and Sean's swaggering need to be a macho dude hurts the family's dynamic. The story takes on a tragic, hysterical and telenova-like turn when one of the bullies is arrested and Zach refuses to supply needed information that will punish Sean and the other tormentor. Whatever good intentions the director had in seriously addressing how Latino families handle gay youths is smothered with over-the-top plotting and stilted acting (although some of the younger cast members are decent enough). Grade-Z acting and directing I can deal with, yet this short winds up being the most dispiriting, least gay-positive effort ever included on these Shorts collections. Why it was included is a mystery.

Presented on disc in 16x9 widescreen (Kimchi Fried Dumplings is letterboxed), these digitally photographed shorts are given a decent look consistent with low-budget indie films. The color-saturated, professional sheen on Pride and The Commitment make them fare the best, visually, while the other shorts' DVD image range from harsh and overlit to pleasantly adequate.

The only bonuses here are trailers for Guest House Films' Black Briefs and Blue Briefs DVDs. It's kind of a strange choice to promote them, since the customers who'd buy Green Briefs likely own those two already.

Despite the steamy packaging, the five shorts in Green Briefs contain very little sex and a whole lot of hokey storytelling, stilted acting and awkward direction (when did indie filmmaking get so soapy and melodramatic?). Disappointingly, it's also lacking in diversity, each one dramatizing an aspect of gay families - whether it's a child or parent - with a bland sincerity. Of this set's five films, one (Pride) addressed its subject with humor and grace, another (The Commitment) was a diverting tear-jerker, while the other three fell flat. Not a good batting average, and the least worthwhile of Guest House Films' Briefs sets. Rent It.