Universe In 3D: A Whole New Dimension, The 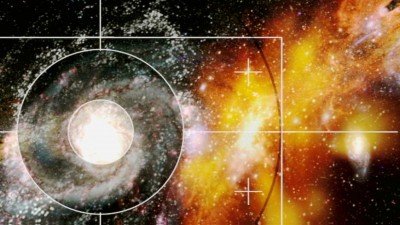 "The Universe" is back again in 3D with this 3-episode collection. 2012's first release of "The Universe in 3D" had three episodes each unnecessarily on its own disc, but this "Whole New Dimension" release is a single disc where all episodes can be watched together or individually in 3D or 2D. As before, the basic format of the series is narrated CG animation, mostly of planets in space with narration from Erik Thompson, interspersed with comments from field experts. 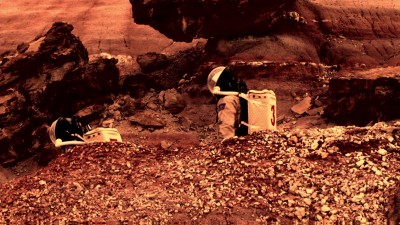 The first episode here is titled "Crash Landing on Mars", a rather sensational look at things that could possibly go wrong if and when humans finally make that trip to the "Red Planet." These are shown through computer animation and some cheap-looking live-action footage with actors portraying astronauts on board a ship and walking around on a rocky area of planet Earth standing in for Mars. One of the big "What ifs" demonstrated is a strong dust storm on the planet causing the human-carrying craft to land far from its intended landing spot, making them that much further from the vehicle already there that will get them back home. Communicating with Earth may not help them enough, as it's said that the traveling of radio waves from Mars to Earth will result in 18-minute delays for their messages to be heard. It's suggested that the rather lo-tech method of celestial navigation, looking up at the stars, will be the most reliable way for people to find their way around the planet's surface. This episode gives you plenty to think about, but also may end up looking ridiculous when the time to go to Mars finally comes as did the theories of travelling to the moon well before that actually happened. 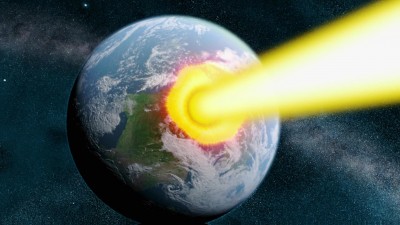 Next up is "The Worst Days of Planet Earth," counting down the seven most catastrophic natural occurrences on our planet similar to the format used in the previous 3D set's "Catastrophes That Changed the Planets." I found this one the most interesting of the three, as most of these events are speculations drawn from centuries of studying things that have been left behind for thousands of years which make some degree of sense but of course have little proof available. Among these events is planet Earth crashing into another planet, long before any known life was here, leaving the Earth dramatically changed and much of the other planet becoming what is now our moon. Another is the "rock the size of Mount Everest" crashing from space that many believe was what caused the dinosaurs to become extinct. Some say that was a favorable event for mammals as they were no longer a food source for many of those dinosaurs, and speculation is given that if something similar happened in the future that would wipe out us humans, it could be detected early enough to deflect away from the Earth. We'll just have to see about that… 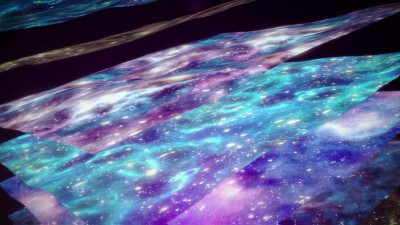 The final episode on this disc, "God and the Universe," ponders the age-old question of how the universe was created- was it through some divine being, or simply a scientific chain of events? A few ideas are explored here- some have the view that everything is attributable to the laws of physics, while others theorize that some of it may have happened via a fourth or greater dimension that us mortal humans simply cannot perceive is there. Some even think that everything we know of was created by a larger alien species, and the universe is really as it was shown in the final shot of Men in Black. To try and verify the "big bang theory", the use of particle accelerators is shown where atomic particles are crashed into each other in an attempt to recreate that and get an idea of what the creation of the universe might have looked like. 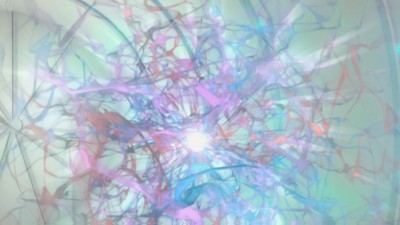 As in the previous set, all three episodes here are presented in 1080p 3D with option for 2D playback. The CG segments look a bit compromised compared to effects you would see in a feature film, but they do a good job at illustrating everything. In 3D, the effect is not spectacular but still pleasing. The live-action shots look great in 3D as well- the various demonstrations are fun to watch, and the shots of people just talking are mostly staged in outdoor locations with a good amount of depth in the backgrounds, though some of it looked a bit sharpened artificially. There is a bit of 2D footage here and there, appearing slightly deep inside the screen. Overall there isn't a whole lot of "wow" factor in 3D, but it's still nice to look at.

The 5.1 DTS-HD Master Audio is adequate, with all narration isolated in the center and most sound effects kept up front, with just a bit of music and sound effects in the rears with good use of the subwoofer during crashes and explosions.

English ‘hard-of-hearing' and Spanish subtitles are included for both the 3D and 2D presentations.

Promos for History Channel series Houdini, Big History and Ancient Aliens are included, as well as "look for it on DVD and Blu-ray" trailers for The Darkest Hour and Knowing. The 5.1 DTS sound check that Lionsgate likes to put on most of their discs is also here, and the disc includes bookmarking and resume functions. 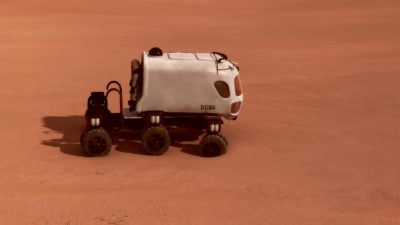 "The Universe in 3D: A Whole New Dimension" doesn't exactly live up to its title as the 3D doesn't blow you away and includes some 2D stock footage, but it's still very informative and entertaining at the same time, with the focus being a bit more intelligent and less sensationalistic than the previous "Universe in 3D" set.