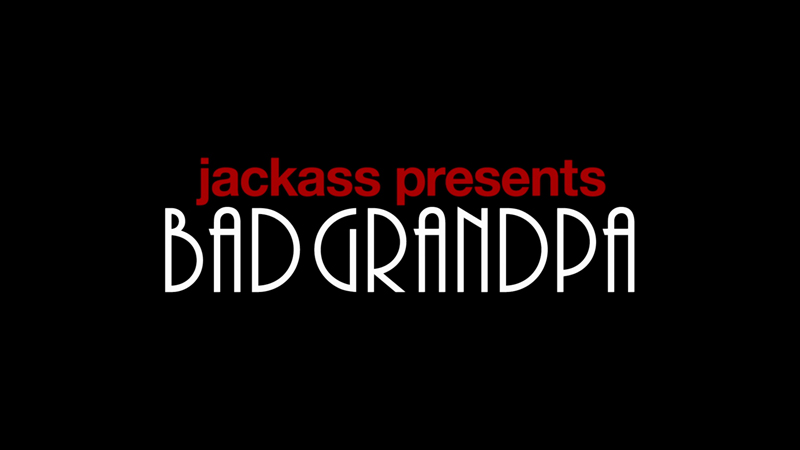 
The Movie
I fully admit I was psyched when I heard there was another Jackass movie coming down the pike. My enthusiasm turned to curiosity when I learned it wouldn't be another stunt/sketch festival, but a genuine plot-driven film. When it was announced that the film would be cast with people who didn't know they were in the movie, my enthusiasm returned, though tempered. Being a fan of the Jackass series of shows and films, I enjoy their strange sense of humor and cringe-worthy tendency to hurt themselves, and welcomed a new take on their usual ideas, but at the same time, welcomed more of their shenanigans.

Instead, we get the story of octogenarian Irving Zisman (Knoxville, under well-constructed old-age makeup) and his grandson Billy (Jackson Nicoll), who are travelling from Nebraska to North Dakota. Billy's mom left him with Irving on her way to prison, and Irving is on his way to pawn him off on the kid's father in Raleigh. Along the way, they have various misadventures, each on their own and together, including plot-related set-ups, like a disastrous funeral for Irving's recently deceased wife and an attempt to ship the little guy to his dad, and random moments of chaos, such as Irving's visit to a strip club for black women or Billy and Irving's street magic exhibition. All of these take place at the expense of unknowing bystanders, whose reactions are the punchlines to the joke. (The film doesn't wink at its conceit, though Nicoll occasionally looks at a camera and one particularly fast stunt gets a replay, breaking the films "reality." 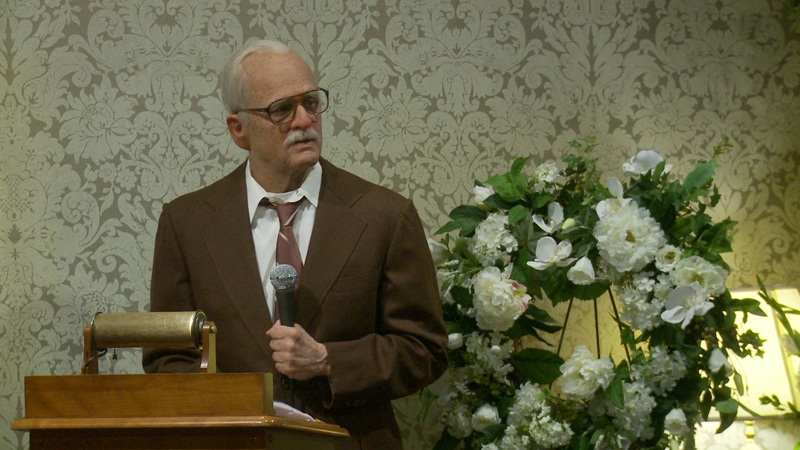 Irving is a cantankerous old man who doesn't want anything to do with this kid, after finally being given freedom by the death of his wife. Played to the adorable hilt by Nicoll, Billy just wants someone to go fishing with. But as with basically any road trip movie, spend enough time with someone and you'll find a bond, and that's exactly what happens with Irving and Billy as they get to know each other while stealing groceries or messing with adult bookstore workers. Though the path we're heading down seems obvious, the film does deflate sentimentality for the most part, until it can't help itself and dives straight into a pile of heart, only to right the ship with a final blow-out stunt, but like most of the film (with the exception of a few anatomically-focused bits) it comes up short on shock value, even to those on the receiving end of the scene.

Although the majority of the laughs in Bad Grandpa are thanks to the wide-eyed looks of the onlookers fooled by the Jackass crew, the two leads are equally important. As stated before, Nicoll is adorable as Irving's ragamuffin grandson, and the restraint he shows when on his own in a scene is impressive. He also can deliver a joke with aplomb. Of course, without Knoxville as the old man, there is no movie. Though credit for the quality of the make-up and prosthetics on Irving belongs to others, Knoxville allows the character to walk the line between dirty old man and charming old-timer. He does have a few crutches he relies on for the character, but Knoxville's still entertaining and he allows viewers to buy into Irving's world, making the story work as well as it possibly could.

This release includes an unrated cut of the film that runs 11 minutes longer, which features a pair of new scenes (neither of which is particularly worth including) and extensions (some very minor) of five other segments. Nothing is worthy of the unrated label (outside of the technical fact that this version is actually not rated by the MPAA) though Irving gets a touch more exposure on ladies' night. 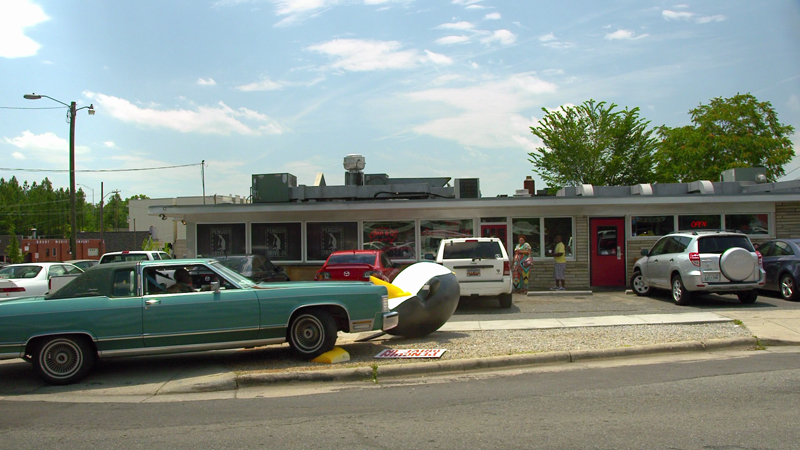 The Disc
This film arrives in a two-disc set in a standard-width, dual-hubbed BR keepcase with an embossed slipcover. The Blu-ray features a static menu, offering the option to watch the film, select chapters, adjust languages and check out the extras. Audio options include English DTS-HD Master Audio 5.1 and Audio Description 2.0, along with French, Spanish and Portuguese Dolby Digital 5.1 tracks, while English, English SDH, French, Spanish and Portuguese subtitles are available.

The Quality
When you're dealing with a movie shot on hidden cameras, you're not going to get the crispest of images, no matter how much camera continue to improve, since you can't really control the lighting. The result is a transfer that is mostly soft, somewhat dull and full of buzzy noise. When the cameras don't need to be out of sight, the quality of this 1080p, AVC-encoded transfer spikes pretty dramatically, looking much smoother and more colorful. There's nothing problematic in terms of digital distractions, but half the time you'd have a hard time telling anyway.

As with the video, the method of production here affects the quality of the DTS-HD Master Audio 5.1 audio, so you're not getting a blow-out presentation. Voices are up-front and center, while the music (and some occasional sound effects) gets a boost from the surround speakers. Dynamic mixing is basically absent and the low-end, outside of some bass in the soundtrack, doesn't offer much of anything. It may not be much, but all things considered, it's probably as good as it was going to get.

The Extras
First up are a set of eight behind-the-scenes clips (running a combined 34:44), which include interviews, prep work, unseen footage and reveals for several of the bigger moments in the movie. The reveals, which show how the unwitting participants find out they're in a movie, are the best part, though seeing the work that went into putting together the bits is pretty interesting as well. It would have been great to see how more of the scenes were accomplished in terms of the cameras and microphones.

Six scenes showing alternate "victims" run almost 20 minutes long and lets you see some of the ways other people reacted to Knoxville and Nicoll's hi-jinks. If you like what's in the movie, there's more here to enjoy.

Also included are three deleted scenes (6:09), though they are mainly just additional versions of scenes in the film, not really deleted scenes. Considering the end credits of the film feature another character from the previous films, who doesn't appear in this one, one wonders where those scenes are. 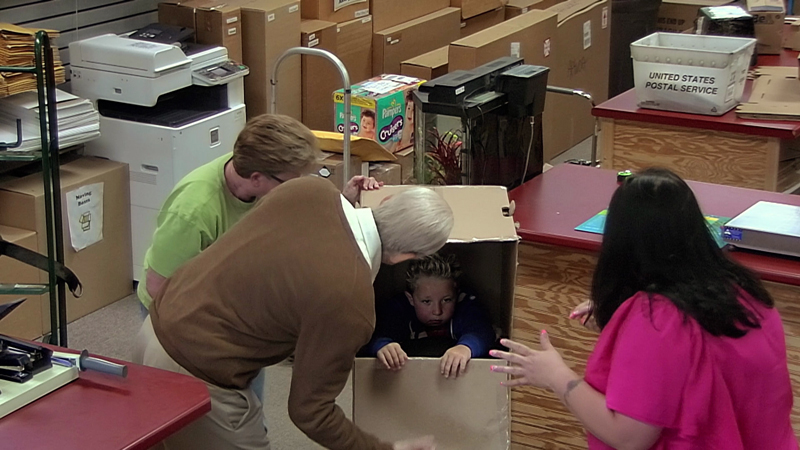 The Bottom Line
Bad Grandpa isn't a bad film, and the oddly-charming Knoxville offers some moments where he makes the movie work beyond the conceit of the hidden cameras, but it doesn't offer enough Jackass-brand outrageousness or laughs and certainly not enough of a plot to truly grab your interest, so it exists in a bit of a limbo. The disc does the best it can with the limited source materials, and throws in some nice bonus material, but if you're looking for something from the Jackass people, you're going to want to return to your old DVDs of the show. This movie isn't going to do the trick.