Bob And The Monster 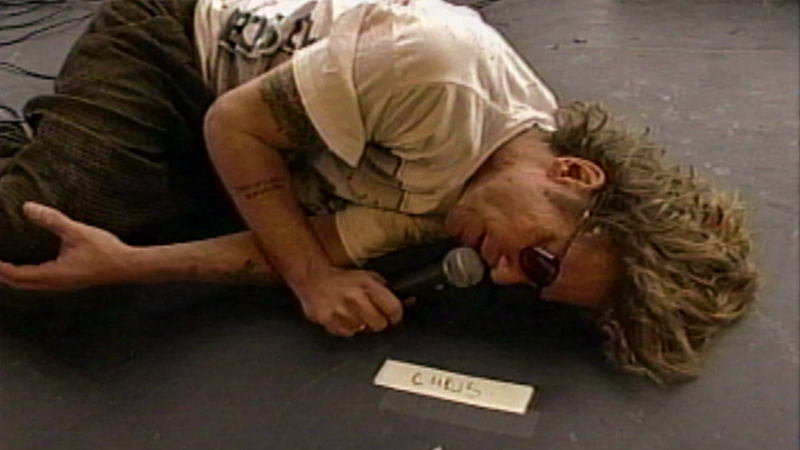 
The Movie
In all honestly, I've never touched drugs in my life. Some would say my perception is altered enough as it is, but I've never had any real interest in illicit substances, and I don't even drink much, outside of the occasional Malibu and pineapple at a wedding. As such, I don't have a lot of understanding about drugs or addiction, and I certainly don't have much of an understanding of addicts. It's hard to get why someone would ingest things that are known to destroy not only their bodies but their entire lives, as well as the lives of those around them. But people keep doing it, and so there's a need for people to help them stop, people like Bob Forrest. The former lead of the L.A. band Thelonious Monster, Forrest has been there and back, and now helps the addicted break free.

Before watching this documentary, I didn't have any knowledge of Thelonious Monster, his connection to some of my favorite L.A. bands, like Red Hot Chili Peppers and Jane's Addiction, nor did I know he was an expert on drug rehab, making appearances on Celebrity Rehab. Coming in fresh, I got to appreciate what kind of primer on Forrest this film is, not to mention the overview it provides on the punk scene that gave us bands like the Chili Peppers and Fishbone. Director Keirda Bahruth efficiently unfurls Forrest's story, taking us to his highest highs and his lowest lows, including home videos that show his candid talk of heroin (and other drug) use, as well as an obnoxious and disturbing on-stage breakdown, before taking us back to his origins to try and explain what happened along the way to short-lived music stardom and the accompanying crash. 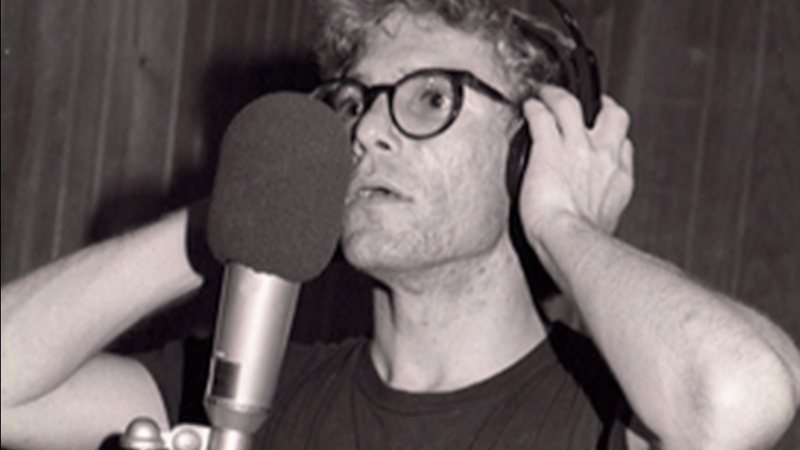 The key to Forrest's story is that he had a comeback, and he didn't keep all the success to himself, putting his down-trodden experience to good use by becoming a counselor to other musicians hooked on smack. The film tells that story in a number of ways that, when combined, are highly effective, ranging from simple line-art animation to give life to audio recordings, claymation recreations of Forrest's heroin misadventures, wonderfully evocative lo-fi archival footage from the ‘80s L.A. music scene, and a host of interviews, with names both big and small. Forrest's roster of friends and compatriots is long and illustrious, including members of the Chili Peppers, Jane's Addiction and Fishbone, as well as Scott Weiland (Stone Temple Pilots), Steven Adler (Guns N' Roses) and Courtney Love, along with former bandmates who provide more insight on Forrest's spiral down and slow and steady climb. For fans of the era, it's a pretty sweet time capsule.

The documentary lives and dies with Forrest though, who is intriguing in all his modes, be it the drug-fueled young and self-destructive singer, the enlightened, helpful elder statesman or everyone in between. The extent of his drug abuse is actually shocking, but it almost feels like it's almost underplayed, as the movie moves from his crash to his rebirth in a rather fell swoop. There are also some aspects that have been left out, like his role in the highly-questionable (and oft-unsuccessful) Dr. Drew Pinsky celebrity rehab industry, but the point of this film was certainly not to be an expose. It's his new purpose that inspired this movie, to the point where his cell phone number is included in the credits for those who need help. What made his life so tailor-made for capturing in a documentary though is his music, which is written from a very personal point of view, drawing on the experiences described in the film, giving the film an outstanding soundtrack that services the story more than most. 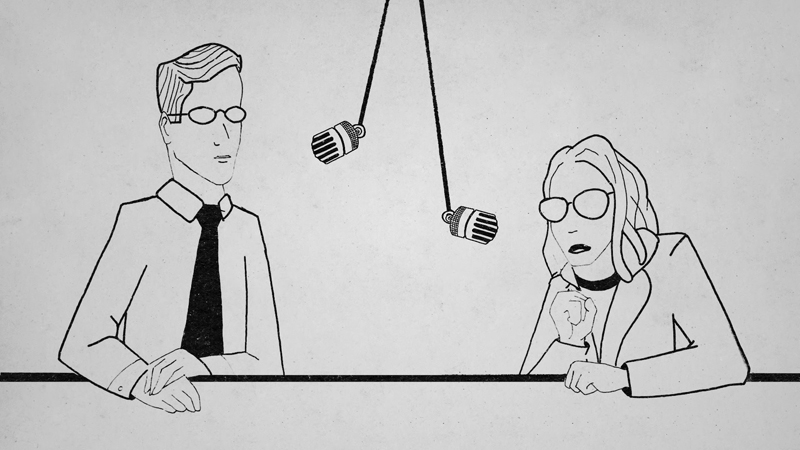 The Disc
This film arrives in a two-disc set in a standard-width, dual-hubbed BR keepcase with an embossed slipcover. The Blu-ray features a static menu, offering the option to watch the film, select chapters, adjust languages and check out the extras. Audio options include English DTS-HD Master Audio 5.1 and Audio Description 2.0, along with French, Spanish and Portuguese Dolby Digital 5.1 tracks, while English, English SDH, French, Spanish and Portuguese subtitles are available.

The Quality
This may be a 1080i, AVC-encoded transfer, but it's a rough ride for the most part thanks to the wealth of old-school footage utilized. Some new footage and the animation is clean and tight, but it's still not of a level you'd expect from a blu-ray release. Even so, the old stuff looks surprisingly nice and there are no real issues with the freshly-produced scenes. If anything, not being razor-sharp allows them to mix in better with the older material.

For most documentaries, a stereo LPCM track is sufficient, since it's a lot of raw on-the-scene footage and interviews, but with the music here, some bombast would be nice. At the same time, there's something fittingly punk rock about this presentation, which features clean, legible voices and keeps the soundtrack strong, yet separated from the interviews.

The Extras
Two commentaries make up the bulk of the bonus content here. Up first is a low-energy track from Bahruth and her producer/husband Rick Ballard. They doesn't really have a tremendous deal to say about the movie, eventually talking about the other commentary about a half-hour in, though they pick it up slightly in the second half of the film. You get an idea about her connection to the subject matter, where some of the large amount of archival video came from and a few notes about the people who appear in the movie, but there's not a tremendous amount of insight in amongst the many pauses (though there's a cute bit at the end.)

On the second commentary, Forrest himself takes his traditional place behind the mic, talking about the film. This is a far more interesting and entertaining commentary, as Forrest just talks and talks, about any and all topics related to his story, all with his understated sense of humor. Combined with the film, this track gives a fuller view of his life. And again, it ends on a high note.

Also included are three deleted scenes (6:09), though they are mainly just additional versions of scenes in the film, not really deleted scenes. Considering the end credits of the film feature another character from the previous films, who doesn't appear in this one, one wonders where those scenes are.

The remaining extra is a 3:50 slideshow showing how the film's claymation scenes were created by the French group Les Lapins de L'espace. I'm an admirer of hand-crafted animation, so getting to see behind the scenes here is certainly welcome. There's also a trailer (2:55) for the film. 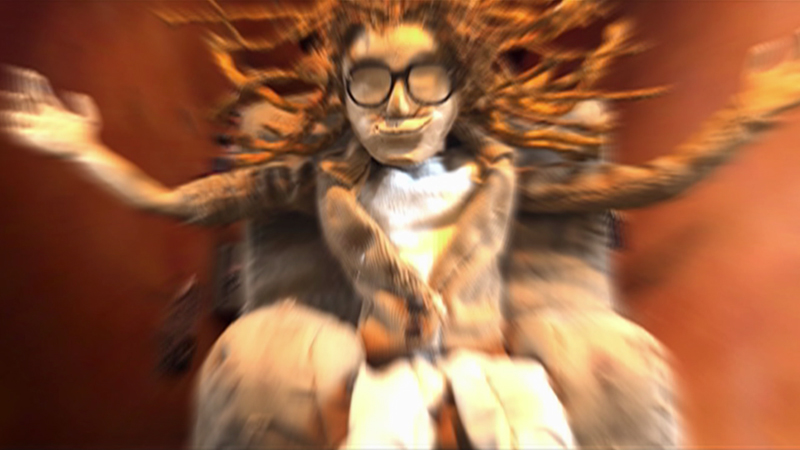 The Bottom Line
Built around one man's struggles with addiction, zBob and the Monster makes Forrest a symbol for a long-gone music scene and the chemical scourge of many a musician, giving a look inside a world better viewed from a distance. Though the mix of great old footage and interviews tells Forrest's cautionary tale well, it feels more like a love letter than a documentary. The disc looks and sounds solid though and offers a few extras to enhance the viewing experience for fans of the 80's L.A. music scene and those interested in the nightmare of drug abuse.