My inspiration for wanting to check out Laverne & Shirley after seeing it many many moons ago when it aired on ABC was borne out of my wife's sudden curiosity about Penny Marshall. Sure, she knew of Marshall's directorial work and is a fan of it, but had little information about her previous life as an actress and comedienne. She had learned about this through listening to Marshall's self-read autobiography which, admittedly when I heard about some of Marshall's stories off screen, made me want to see how the show's aged through the years.

For those unfamiliar with the show, its premise is simple. Marshall played Laverne to the Shirley of Cindy Williams (American Graffiti). The seventh season of the show found them in Hollywood, their second season on the West Coast after spending five seasons "in Milwaukee." Accompanying them to California were their friends Lenny (Michael McKean, This is Spinal Tap) and Squiggy (David Lander, A Bug's Life), along with Laverne's father Frank (Phil Foster), who also made the trek with Carmine (Eddie Mekka, Analyze This), a.k.a. The Big Ragu. The show is old-fashioned, three-act situation comedy where the characters are introduced to a dilemma, work hard to get through it and resolution is accomplished. Many times Marshall and/or Williams use physical comedy to do so, but in other occasions the jokes are fast and furious and the pair accomplish their goal of making the audience laugh quite well.

In these days where contemporary television shows that are genuinely funny either a) use one camera and/or b) utilize a great deal of the content in them are improvised because of the ensemble's skill, getting a bit of a throwback bent to my normal television comedy menu is slightly jarring but ultimately, for what Laverne & Shirley does, it is generally innocuous. However, the occasional boldness of Marshall and Williams in the late ‘70s and early ‘80s predates some of the physical antics that women like Amy Poehler and Tina Fey attempt in their own shows, and it feels like Marshall and Williams' feats may be unnoticed in today's landscape. That may require correction and/or revision in the future. For the lack of danger that Laverne & Shirley seeks, the performances that Marshall and Williams turn in are significant if nothing else for historical reasons. 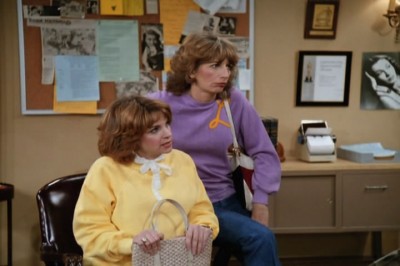 While watching the show, I did wonder at how some of what is mentioned in Marshall's book may have been simmering behind the scenes. Apparently the decision to cast Marshall by her brother Garry (who also created and had two other hits on ABC with Happy Days and Mork & Mindy) was met with some initial apprehension before the popularity of the show seemed to rebuff it. But also now in hindsight, if there was one incident in the seventh season that set the course of distance between Penny Marshall and Cindy Williams. Stories about the two's arguments were well-known on Paramount lots and Williams would leave the show early in the eighth season. But they were continuing to turn in good work, even if the show's ratings took a downturn after the show's "move" to California (a move that Marshall seems to infer was not adequately explained and the show might have suffered as a result).

Admittedly into its seventh season, there was some metaphorical fraying around the edges and fading of colors in the tapestry that was Laverne & Shirley and the move to Hollywood was a shark jumping, fridge nuking moment the show never recovered from. That said, looking at the show from Marshall's recollections of it does make for interesting viewing, and even for those new to the show will certainly get a laugh or two out of it, even a modicum of respect for it, as they should.


The show's twenty two-episode run is spread over three discs and presented in 1.33:1, consistent with their original broadcast format. The episodes look as good as they are going to, with accurate color reproduction and film grain through the viewing experience. You can see the edits where one scene ends and another resumes in how there is some minor fading in the image, though it does not distract significantly in any way. For a three decades-old show it looks fine.


Mono audio rules the day for the show as it does in previous seasons. The show sounds clear and balanced without noticeable dropping out, hissing or chirping. Dialogue is consistent and requires little user compensation and the show in general sounds good despite any surround track that some would call for.


Save for promos which accompany each episode, a two-minute gag reel that has a couple laughs but is forgettable.


Season Seven of Laverne & Shirley is the last full season with the cast and for novelty's sake alone is a nice moment to check out. For those who are more than familiar with the show may decide to steer clear of the show at this point. However, adding in a different flavor in the chili such as Marshall's book (or Marley Brant's which covers this show and other Paramount-produced ones of the era) makes the different perspective while viewing it entertaining. For those who do not know the show this may be a good jumping off point, and completists will want to pick it up as well.