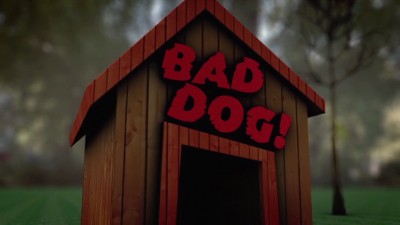 
The Movie
My daughter is obsessed with dogs, more specifically puppies, but dogs of any kind will do. As a result, Animal Planet is a frequent stop on our cable box, so she can get her fill of furballs. There are a few shows we don't watch on that channel though, and Bad Dog! is one of them, though now, after watching the first season, it seems that was a bit misguided, as I assumed it was similar to the awful My Cat from Hell. There are still some things about Bad Dog! that don't sit well with me as entertainment for my daughter, but it's nothing like what I thought it was.

The show is sort of like an animal version of TruTV's "World's Dumbest" series, which offers interviews, recreations and home video of various animals in troublesome situations. Each episode offer up five candidates for the title of Baddest Dog of the week, along with an assortment of clips under various categories. The five candidates are presented with their owners, who explain the trouble they caused and why they forgave them. The thing is, often, the animal up for the weekly prize isn't actually bad, and it's frequently not even a dog, as everything from cats to monkeys to bison and birds are up for the title. The resulting mix is a bit weird, and you start to wonder more about the owners than the animals, especially with the monumental destruction some of the pets cause. 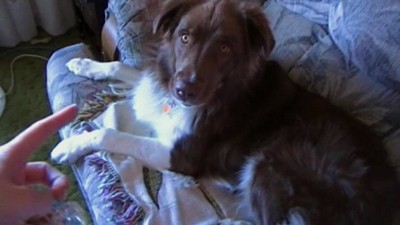 In essence, watching an episode of Bad Dog! is kind of like taking a spin through YouTube looking for cute animal videos. You'll get goofy dogs running into things, screaming goats and cats breaking and entering, but then you'll get to go a bit deeper into some of the clips, like a dogs capable of flying leaps (which let him steal food from counters) or a cow with a vendetta against a farm worker. The in-focus pieces are a touch formulaic, with the interviews and video clips fitting into a bit of a pattern, but they also help set a pace to the show's segments, keeping everything moving well.

Though simple in concept and limited in number of episodes, with apparently just five episodes in this first season, thanks to the variety of content and the extreme nature of some of the animals' behavior, the 44-minute episodes are entertaining to watch. Though my daughter is square in the target audience for a show like this, her reaction was beyond even her love for the little-girl catnip that is Too Cute. She curled up on my lap and watched four episodes in a row, which is beyond rare, as she's not one to just sit and watch TV. Impressive work, Bad Dog!, however there is some questionable language used in a few spots, with one particularly classy family fighting each other and yelling about genitals. 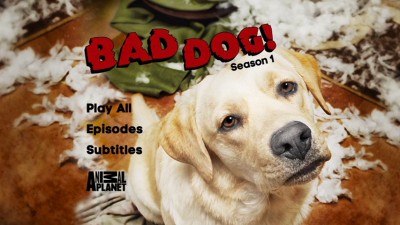 The DVD
This show's five first-season episodes arrive on one DVD, which is packed in a clear, standard-width keepcase with a two-sided cover featuring episode descriptions. The DVD features a static, anamorphic widescreen menu with one of the most annoying audio loops ever, as well as options to play all the episodes, select shows and adjust languages. There are no audio options, but subtitles are available in English SDH.

The Quality
The anamorphic widescreen transfers are clean and feature appropriate color and a decent level of fine detail, considering much of the footage is taken from home video. There are no real obvious issues with compression artifacts or similar bugaboos. It's obviously not HD, but the source material isn't either, so there's npt much to complain about.

The Dolby Digital 2.0 audio track is standard-issue for a basic cable TV series, offering up a center-balanced presentation that keeps voices clear and the music and sound effects at appropriate levels. Nothing much was expected here, so there are no disappointments.

The Extras
The dog must have ate the extras, for there are none to be found. 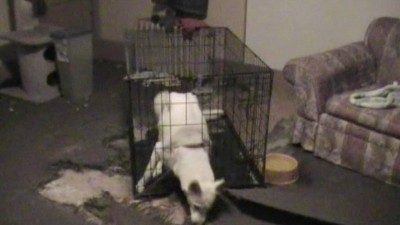 The Bottom Line
My expectations were low coming in, but Bad Dog! will entertain animal lovers, despite the small amount of episodes included. The look and sound are solid, though there are no extras to enhance the value, so your mileage will vary based on your enjoyment of some rambunctious critters.