Man in the Dark 3D 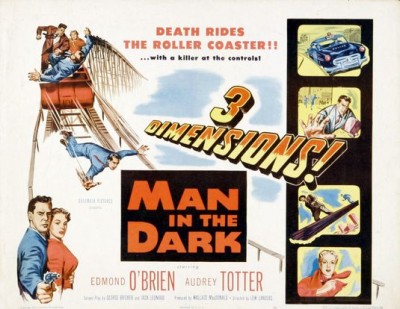 Shot over eleven days in 1953, Lew Landers' Man in the Dark is a scrappy noir. Tightly calibrated at 70 minutes, it was originally made to cash in on the 3D craze. At times, the plot goes in strange directions to service the need to deliver thrills that would pop out at the audience, careening through various set dressings, often at the expense of the story, but rarely being dull.

Edmond O'Brien stars in the film as Steve, a crook who, as part of a plea deal, has agreed to let a doctor (Dayton Lummi) completely erase his memory. It's an experimental procedure that could provide a new option for rehabilitating bad guys. The operation is successful, but just because Steve forgot that he used to be a crook doesn't mean others have. When Steve got pinched, he had hidden a vast sum of money, and only he knew where. Both a determined insurance investigator and Steve's old gang, led by prolific character actor Ted de Corsia (The Naked City, Three Secrets), want to know where the stash is. As Steve becomes aware of his predicament and that he's not who he thinks he is, he has to race against time to figure out his missing past before his former pals catch up with him. Adding further tension is the presence of Steve's one-time girlfriend, played by noir perennial Audrey Totter (The Set-Up, Lady in the Lake). It's hard to tell at first whose side she's really on.

O'Brien largely recycles his performance as the poisoned man from D.O.A., bringing the same panicked energy that would kind of become his trademark. Man in the Dark is all about forward momentum. As Steve's memories come back to him, he has to keep exploring the new clues in hopes of figuring out the rest of the story. This leads to a climax at a carnival, presumably because the studio wanted to see what a roller coaster looked like with added dimensions. Watching the movie now in 2D, Man in the Dark has an added surreal menace. Landers creates multiple point-of-view shots to give an excuse to have stuff poke out of the screen--a cigarette aimed at Steve's eye, masked doctors looking down at him on the operating table--and the extreme angles serve to increase the paranoia.

The story otherwise isn't much to get too excited about. The plot is serviceable, following a fairly predictable trajectory. However, I will say that Man in the Dark has more sharp zingers per square inch than just about any noir I can think of. Writers George Bricker and Jack Leonard (the original writer of The Narrow Margin) have a real gift for tough-guy patter, and the barbs more than make up for any lag in the narrative.

Video:
Man in the Dark has been released as part of the Twilight Time label and is limited to 3000 copies. The disc has been manufactured to make it compatible with Blu-ray players that can play 3D movies so that you will have the option of watching it in its original format. It also plays in the standard two dimensions on regular players.

I watched the movie in 2D and quite enjoyed it anyway. The image quality is excellent. The 1080p transfer, shown at a 1.33:1 aspect ratio, is crisp and clean, with strong attention paid to the appropriate levels and contrast of the black-and-white photography. I didn't notice any egregious marks on the print, nor any glitches in terms of digital blocking or other error in authoring.

Sound:
The mono soundtrack is given DTD-HD Master Audio mix. It sounds great, with clear tones, no hiss, and no audible drop-outs.

Extras:
Extras include an isolated score and an amusing trailer where Edmond O'Brien tells the audience about 3D.

The disc comes in a standard case with a booklet insert featuring liner notes on the movie.

FINAL THOUGHTS:
Recommended. An entertaining B-grade noir, Man in the Dark may have started off as a gimmick picture to capitalize on 3D, but the 1953 thriller holds up as a sometimes strange, fast-moving crime narrative. Edmond O'Brien stars as a harried man trying to outrun his past, and Audrey Totter is the dame who can't quite figure him out. With strange sets and amusing shots designed to pop off the screen, Lew Landers' picture has an unintentional surreal quality that makes it fun to watch, while the excellent dialogue strings everything along to the big finish.