My Little Pony Friendship Is Magic: A Dash Of Awesome 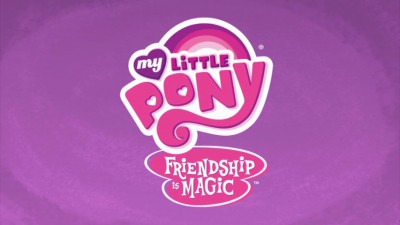 
The Story So Far...
Led by Lauren Faust (The Powerpuff Girls, Foster's Home for Imaginary Friends), Hasbro brought their old girl-toy tie-in cartoon back as a centerpiece of their HUB cable channel. Trying to make a better, more universal product than the original, Faust wound up creating a show that not only appeals to young girls, but to older males who have embraced the series and adopted the label of "bronies." The series is currently in its fourth season, and several home-video collections have been released. DVDTalk has reviews of several of the DVDs.

The Show
When I last reviewed a My Little Pony: Friendship is Magic DVD, my daughter would have been considered a casual fan of the series. Now, as the assortment of pony toys and dolls strewn across our living room floor at this very minute attests to, she's a die-hard pony pal. She's watched every episode, knows all the characters and enjoys drawing them (as well as other of her favorite characters in pony form.) It would be hard for her to pick a favorite (believe me, I asked) but Rainbow Dash is one she frequently mentions, unsurprisingly, as she's the pony with the brashest attitude and most interesting look, with her rainbow-colored mane and tail.

This collection focuses on the high-flier, and unlike so many other kids-show collections, it stays on-topic and goes in chronological order, pulling three episodes from the show's second season, and a pair from the currently-airing fourth go-round. I figure, with my daughter now eight, it's time for her to get into the family business, so she's going to take over from here:

My Little Pony: A Dash of Awesome 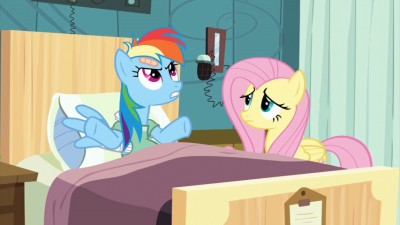 "May the Best Pet Win!" (Season 2)
Rainbow Dash is trying to choose a pet with Fluttershy's help. But to choose, they do a race to choose which is the best. It has to fly, be awesome, cool and radical. In the end, she finds it's better to have a best friend. I liked when Tank the Tortoise uses his head to lift a rock to help Rainbow Dash.

"Rainbow Falls" (Season 4)
Fluttershy, Rainbow Dash and Bulk Bicep are trying to qualify for the Equestria Games, but Rainbow Dash can't decide which team to represent, Cloudsdale, where she was born, or Ponyville, where all her friends live. My favorite part would have to actually be the cheerleaders, because I want to be a cheerleader really bad.

I think My Little Pony fans should get this DVD. I'd get it for children who are 5-8. It would be good for them. It's full of laughter and it teaches children lessons, like lessons about friendship. My favorite episode is "Daring Don't." I love it because of the action. I like them because they are all Rainbow Dash episodes and Rainbow Dash is my third favorite pony. Princess Twilight Sparkle and Fluttershy are my favorites.

Thanks, Emma. These episodes offer several examples of how the show continues to court the kids who are the show's reason for existence, while still giving a wink to the older fans who have made it a huge success. From the nameless inclusion of Derpy Hooves (a fan-favorite character famous for being a bit "off", signified by her crossed googly eyes), to the intense Bulk Biceps, a Kricfalusi-esque pegasus with steroid-affected wings and a tendency to yell, the show always finds a way to include something odd for the bronies to enjoy. Adding to the fun behind the cuteness are real-world-to-pony adaptations, like an Indiana Jones-like adventurer and an obviously-inspired author named A.K. Yearling, along with some clever meta gags throughout (like an old-school map trail that ends with Pinkie Pie actually painting a line behind the group.) Of course, at its core, the show is all about cute, silly fun and positive lessons like being loyal, friendly and smart, but it's easy to see why the show attracts more than just little girls. 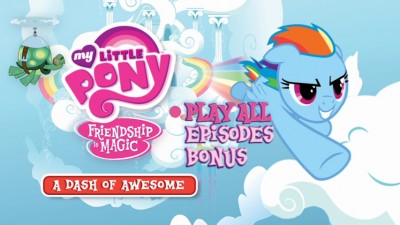 The DVD
Packaged in a white single-width keepcase, which is inside an embossed holofoil slipcover, this DVD offers up five Rainbow Dash-centric episodes. The discs has a static, anamorphic widescreen menu, with options to play all the episodes, select shows and check out the extras. There are no audio options and no subtitles, though closed captioning is included.

The Quality
Presented in anamorphic widescreen, these episodes look good, but they can't touch the way the show looks when it airs in high definition, as it comes off as a touch blurry in comparison. Despite that, the series' candy-colored animation is bright and richly colored, and there are no evident issues with compression artifacts.

The audio is delivered via Dolby Digital 2.0 tracks that are fine for this series, coming off clear and strong, with the balanced audio delivering the songs, voices and sound effects with sufficient power.

The Extras
As with most such releases, the extras are brief, offering only a single sing-along segment for the song "Find a Pet," from the episode "May the Best Pet Win." On-screen karaoke-like lyrics let your little one sing with the song, though, based on experience, there's a good chance they already know all the words. 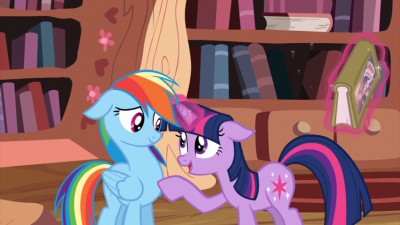 The Bottom Line
If Rainbow Dash is your kid's favorite pony, this set delivers the goods, with a quality sampling of episodes focused on the speedster. Five episodes for about 13 dollars isn't the greatest deal (especially when the entirety of season three costs just two dollars more), and with no extras, this disc may wear out its welcome quickly. However, there's not real negative to this release, so if you can find it cheaper or just have a Rainbow Dash fan to satisfy, it's a decent pick-up.