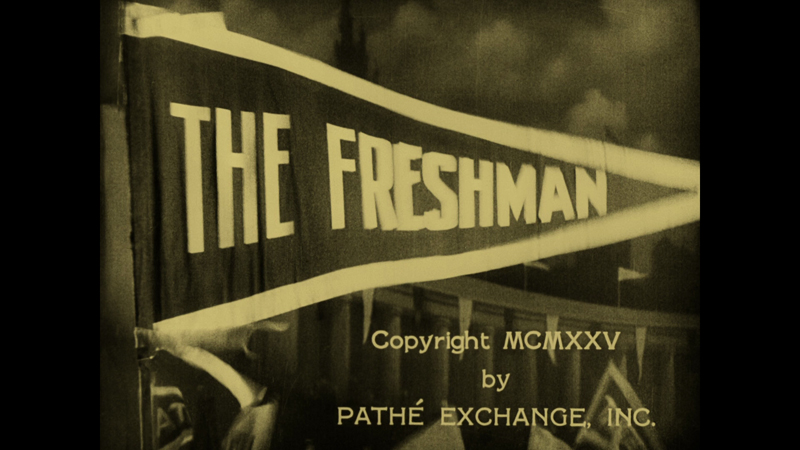 
The Movie
The Criterion Collection has long been in the Charlie Chaplin business, but they've kept the other members of the silent comedy holy trinity, Buster Keaton and Harold Lloyd, at arm's length. Though Keaton still remains spine (number)-less (with the not-really-an-exception of It's a Mad, Mad, Mad, Mad World), Lloyd is slowly getting his due recognition, first with the excellent Safety Last! Blu-ray, and now with his biggest box-office hit, The Freshman. The story of Harold "Speedy" Lamb (LLoyd), it's a tale of college experience that would set off a tidal wave of such cinematic explorations of higher learning, even if he never steps foot inside of a classroom the entire film (which may be the biggest reason the film works so well in satirizing college life.)

Harold is an everyboy, looking forward to going off to college for the college experience, or at least the college experience he's seen in the movies. He's even got a little jig he learned to ingratiate himself with the student body, much to his more realistic parents' dismay. When he arrives on campus, he's set upon by bullies who take advantage of his naivety and desire to be popular. Soon he's spending big money buying friends and trying to get onto the football team (a quick path to popularity), despite no real ability to play the game. The only person he manages to really impress though is Peggy (proto-Zooey-Deschanel Jobyna Ralston), a simple housekeeper at the rooming house where he takes up residence. 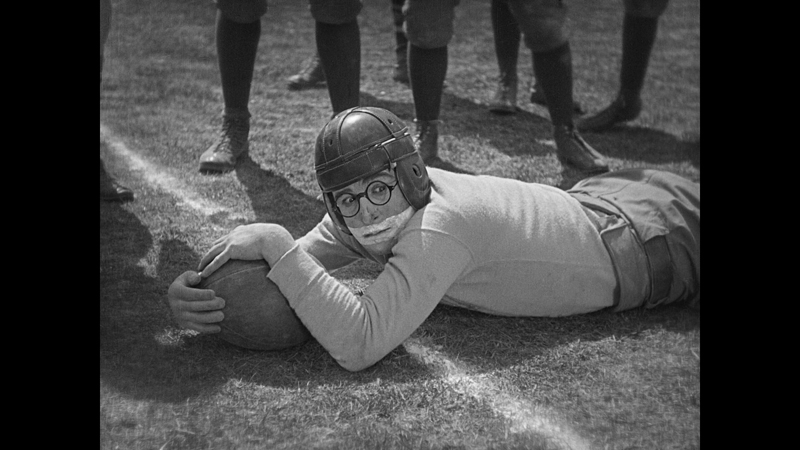 The film is built around four main set pieces: a dean's address Harold accidentally hijacks, a painful football practice, a fall frolic Harold throws in the hopes of becoming big man on campus and the big football game that sees Harold sitting on the bench. In between, there's a few smaller bits, mostly relationship moments between Peggy and Harold, including their crossword-inspired meet-cute aboard a train and an adorable moment involving her sewing skills. However, the film's 76-minute runtime is mainly split four ways, and, aside from the address, those scenes are classics (the address, though amusing, just doesn't hit the same highs. and Lloyd seemed to know it, as it gets in and out much quicker than the other, grander moments.

Though the football scenes are what give this film its premise and iconic imagery, and feature many wonderful gags that take full advantage of Lloyd's athletic skills and ability to stagger around (not to mention his superhuman ability to take a beating and keep on ticking), it's the fall frolic that is the film's highlight. There's so much going on in this scene that it could easily get weighed down by all the elements, anchored by a drowsy tailor and a barely-stitched-together tuxedo, but instead it comes off like a finely choreographed ballet. Of course, Lloyd gets most of the credit, as his reactions, timing and gracefulness make it all come together, but all the work that went into preparing all the gags is the key. Though ridiculous by nature, as the tailor attempts to keep Harold's tux in one piece throughout the party, it never seems overly contrived (unlike the football game, which relies on a number of over-the-top coincidences that stretch one's ability to suspend disbelief.)

As enjoyable as Lloyd's physical comedy is, there's something in this film that's even funnier, and that's the intertitles, which feature some of the best-written cards I've ever seen. When you've got a title card that reads "The opening of the Fall term at Tate University - a large football stadium with a college attached.", decades before the NCAA would turn institutions of research and learning into the NFL's minor-leagues, you know you've got something special. The intertitles aren't even just written well, they are well-designed, with several animated examples early on. True, they don't feature some of the excellent art seen in cards from several of his shorts (check out High and Dizzy in the extras for a great entry there) but there's a tone that carries the film's momentum through to the next scene better than most films' captions. 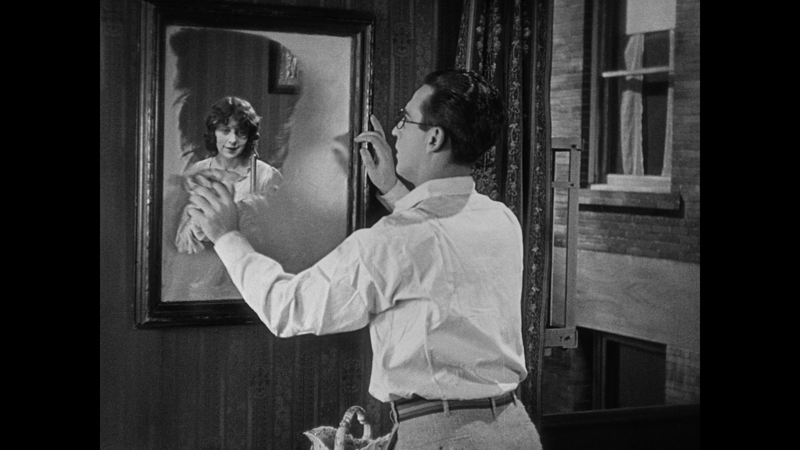 The Discs
The Freshman arrives on one Blu-Ray disc and two DVDs, in Criterion's now standard dual-format, Blu-ray-height digipak, with the DVDs overlapped on the left, and the Blu-ray on the right. The digipak, which is designed to look like a yearbook, working in tandem with the 20-page booklet, is held inside a sturdy, matte-finished slipcover. The disc, featuring the wonderfully simple Criterion menu design, gives the choice to watch the film, navigate the timeline, select scenes, adjust the set-up and check out the special features. There are no audio options, and no subtitles or closed captioning (naturally.)

The Quality
The 1.33:1, AVC-encoded 1080p transfer here is the result of a 4K scan of a restoration on the part of the UCLA Film & Television Archive, utilizing two separate cuts to complete the film. Further clean-up was done, along with new tinting (several scenes are, as directed by original prints, yellow or blue, unlike the rest of the movie) and the results are outstanding, with an incredibly high level of fine detail that makes it look like it could have been shot yesterday. Though there's some very minor flickering and occasional jittering in a few spots, for the most part this movie looks pristine, with just a few noticeable issues with dirt or damage (with the party scene offering the most obvious problems.)

The new score by Carl Davis, presented in a LPCM 2.0 track, is an improvement over the previous DVD track by Robert Israel, as the feel aligns better with the mood of the movie. The ensemble comes across strongly, but with appropriate separation for the instruments, while the overall track has just the right power for the film, especially during the big football game. A quality presentation.

The Extras
The supplements get started with a commentary from historian Richard Bann, film expert Leonard Maltin and Lloyd archivist Richard Correll (which was previously available on DVD in 2005 (a fact betrayed by Maltin saying "we mentioned this on the other commentaries" at one point.)) A very academic and organized track, it puts the film's early 20th-century elements into context for modern audiences, while discussing the various gags and set pieces and talking about Lloyd's filmmaking process. There's a lot of trivia shared during the very friendly chat as well, including a connection between this film and the Our Gang shorts.

Correl brings more background about Lloyd to the foreground in a one-on-one discussion he has with historian Kevin Brownlow. During the 39:48 chat, where they talk about their own histories with the filmmaker, the historical value of Lloyd's films in terms of understanding the ‘20s, cuts he made in re-releasing the film and the film's origins are among the many topics covered, with a focus on The Freshman, while touching on other films, including his collaboration with Preston Sturges. Some of the material is also talked about in the commentary, but in this conversational setting, the pair get into more detail, and their enthusiasm for Lloyd, his films and movie history in general shines through.

For more history on Lloyd, the disc turns to another historian, this time John Bengtson, who offers the visual essay "Harold Lloyd: Big Man on Campus." A part of the extras on Safety Last!, he retains his focus on Lloyd's use of California landmarks, explaining the various college locations used in the film, breaking down the parts of the big game and where they were shot, while also illustrating where they were used in other movies. It's a bit dry, with lots of minutiae shared, but for trivia fans and the opportunity to check out some great behind-the-scenes photos, it's worth a look and listen.

As on Criterion's release of Safety Last!, there are three newly restored shorts from Lloyd, including 1919's The Marathon (13:38), 1920's An Eastern Westerner (27) and the 1920 High and Dizzy (21:39), though these don't include commentary tracks. Of the three, The Marathon, which sees an unwanted suitor on the run from several combatants, may be the best, mainly because with its shorter length, it has a higher percentage of comedy moments, while Gabriel Thibaudeau's new piano score keeps up the energy. That isn't to say the other two, which were directed by Hal Roach and feature new scores by Carl Davis, aren't fun, with Westerner following a rich, urban party boy who's sent out west to his uncle's ranch as punishment for his playboy ways, while the "thrill picture" High and Dizzy sees a drunken glasses character stumble in and out of danger. It's interesting to spot how many gags from these shorts are repeated as part of Lloyd's trademark style, and which made their way into his later feature classics. The presence of all three in fine quality here is greatly appreciated.

There are several items pulled from the archives for this release, starting with clips (29:37) from Harold Lloyd's Funny Side of Life, a repackaged 1966 theatrical release of The Freshman. Lloyd provided a new intro that helped new audiences better understand the movie's era, while a "best of" reel with new narration includes some of the finest gags from the glasses character films. When you pull the best from one of the finest film comics ever, the results are hilarious.

Footage from a 1963 tribute to Lloyd (and Mary Pickford), held by the Delta Kappa Alpha cinema fraternity is next. Running 29:21, it includes an intro by Gloria Swanson, and features an on-stage Q&A with Lloyd, who's flanked by Steve Allen and writer/director Delmer Daves. Among the topics discussed during the light, friendly affair are the origins of his glasses character, film technique, comedy styles and who he thinks would play him in a movie about his life. As expected with Allen on hand, it's a smooth bit of interviewing.

The bonus content wraps up with a clip from a 1953 episode of What's My Line? (6:31 ), with Lloyd sitting in as the mystery guest to promote The Freshman being back in theaters. Lloyd is his loveably goofy self in answering the panel's questions (none of whom were immediately identifiable to your reviewer [though reader Allen Plant believes them to be Dorothy Kilgallen, Steve Allen, Arlene Francis, and Bennett Cerf]) and the game makes you wish they'd bring the old Acme Comedy Theater live version, with guests like Greg Proops, Carlos Alazraqui and Matt Walsh, to television.

Along with the usual details about the release, the yearbook-themed booklet includes cast photos, credits, stills and set photos, as well as former David Letterman writer Stephen Winer's "Speedy Saves the Day! A Harold Lamb Adventure!," an essay about The Freshman, which puts Lloyd's football player into the context of popular comedy as well as the silent film era, illustrating the unique nature of Lloyd's striving heroes. 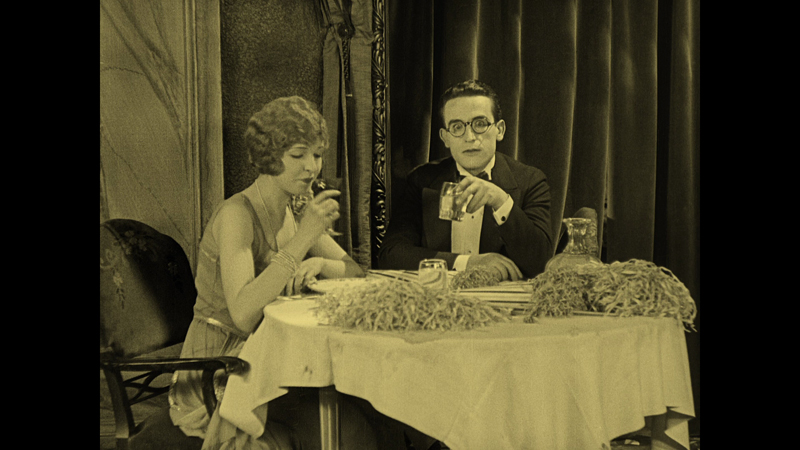 The Bottom Line
It's almost a shame that Safety Last! preceded The Freshman in the Criterion Collection, because Safety Last!, though chronologically first, is the pinnacle of Lloyd's choreographed comedy perfection, while The Freshman is more of a populist crowd-pleaser. Even so, there's plenty to like about this film, with some of the finest football comedy ever captured on film and plenty of classic, timeless Lloydian set pieces. As usual, Criterion has hit the mark with its gorgeous presentation and contextually-appropriate haul of bonus content, delivering another must for anyone with a passing interest in silent comedies.