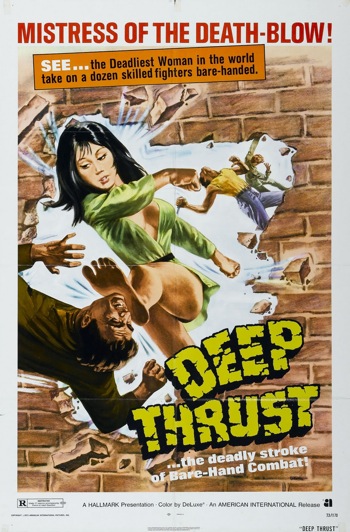 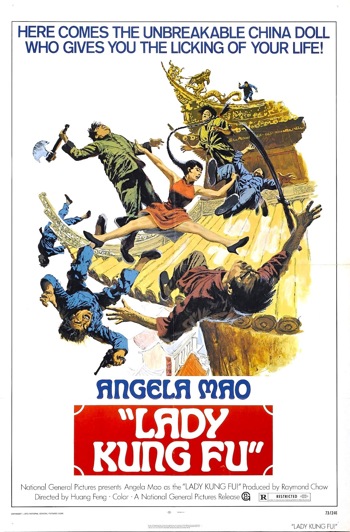 In the U.S., Mao Ying (aka Angela Mao, or as Shout! Factory has chosen to split the difference: Angela Mao Ying) is best known for playing the role of Bruce Lee's sister in 1973's Enter the Dragon. The Taiwan-born star appeared in over three dozen martial arts films before retiring in 1992. Shout! Factory has a six-film collection from Mao's mid-'70s prime slated for release in June, but they also decided to offer up this double-feature appetizer featuring two efforts made in Hong Kong the year before Enter the Dragon crossed over. It makes a bit of sense to leave these flicks out of the upcoming collection, because despite Mao's significant presence in Lady Whirlwind and Hapkido, she's really more of a co-lead who spends a fair amount of time offscreen in both films.

The first film, Lady Whirlwind, features a story that is paradoxically quite convoluted and essentially bare-bones at the same time. Ling Shih Hua (Chang Yi) is an ex-gangster who was left for dead by his former Japanese employers and has been hiding out for three years. His old Japanese bosses begin to suspect he might not be dead when a mysterious woman with a vendetta, Tien Li-Chun (Mao), shows up looking for him. The woman who has been hiding Ling for these past three years unintentionally leads Miss Tien right to him. Miss Tien blames Ling for the suicide death of her sister, and she is seeking an eye for an eye. Ling asks for a brief stay of execution, so he can come out of hiding and take his own revenge on the Japanese gangsters whom he blames for being the root of both his and Miss Tien's misfortunes.

The majority of the film consists of Ling or Miss Tien fighting big groups of Japanese gangsters, with a few one-on-one brawls for variety. Both Chang and Mao are great fun to watch in these fight scenes, and director Huang Feng's sometimes handheld, always kinetic use of the camera really juices up the action -- even if a few of the stuntmen tend to fall down before a punch or kick gets near them. While Lady Whirlwind is not brainless, its plot scenes seem a bit perfunctory, giving an impression of the film as almost being "fight porn." (Maybe that was why the U.S. distributor released the film as Deep Thrust.)

And while Mao gives an indelible performance, painting Miss Tien as a fierce instrument of vengeance, this is really Ling Shih Hua's story. He is the one who must gain the strength and ability to confront his past, while keeping Miss Tien at bay, so she doesn't take her revenge before he can exact his own. There's even a late-film training sequence just for Ling, where he is taught a move called the "God Given Tai Chi Palm," which he utilizes to gain his final climactic victory over the Japanese thugs. The eventual resolution of Miss Tien's conflict with Ling is almost a narrative after-thought.

The second film in the set, Hapkido (ironically titled Lady Kung Fu in its original U.S. release), has a more thought-out story (reminiscent of Bruce Lee's Fist of Fury) that better integrates Mao's character. The film is set in 1934, and once again, the Japanese are the bad guys. A trio of Chinese Hapkido students leave their school in Japan-controlled Korea to set up a school in Cangzhou, China, so they can spread the teaching of this Korean martial art. Fan Wei (Sammo Hung) is the hot-head of the three, and he ends up angering the masters of a local Japanese dojo when he beats up a few of their men. He was in the right -- the men he beat up had been making a ruckus at a local dumpling shop -- but that means little to the Japanese. Straight arrow Kao Chang (Carter Wong) goes to the dojo to make nice, but he ends up outmanned and brutally beaten. That leaves Yu Ying (Mao), the wisest of the three, to avenge her wronged friends and uphold the ideals of Hapkido in the face of Japanese oppression.

The fight scenes in this film consistently match or exceed the sequences in Lady Whirlwind. Sammo Hung's fights in particular are a memorable blend of deft athleticism with a touch of humor. Mao is more of a straight woman here, and her fighting style comes off as more acrobatic in comparison to her peers. Wong holds his own, though he only really gets one featured scene. Huang Feng is the director again, but he manages to approach Hapkido with a slightly different style than Lady Whirlwind. Rather than go in for close moving shots, Huang keeps his camera a bit wider and less active -- which surprisingly does not lessen the excitement or impact of the fight footage.

The film seems a little higher budgeted than Lady Whirlwind, too, which maybe contributes to the greater care taken with the non-fight elements of the story. The attempt to give the film more dimension and depth is welcome, but surprisingly, it also causes certain sections of the film to drag a bit. That might just be the trade-off that comes from not starting a new fight scene every few minutes.

Taken together, Lady Whirlwind and Hapkido are a perfect one-two punch of chopsocky fun. While neither one is a top-tier classic, they stand high above the inferior martial arts fare that clogs many a movie store's bargain bins -- and they certainly provide a nice showcase for Angela Mao Ying.
Both movies:

The Video:
Both films are presented in 2.35:1 anamorphic widescreen transfers, but of vastly different quality. While the presentation of Lady Whirlwind is not the worst I've seen for a Hong Kong martial arts flick, that's definitely not saying much. The source print is a barrage of dirt, specks, and damage. Color is inconsistent; sometimes the image is a bit too red, and sometimes it is a bit too blue. Rarely does the film image seem to reflect the original vintage quality. Add to this a number of video issues, including edge enhancement, blocky artifacts, and ghosting during moving shots and action scenes. I'm not exactly sure who to point the finger at for this, but I'm betting that Fortune Star Entertainment provided Shout! Factory with a low-quality master.

I make this assumption because Hapkido looks great. There has clearly been remastering on this movie. The color is consistent and nicely saturated. Skin tones are realistic. There's a nice level of detail. On the video end, I only noticed some digital noise in a couple of shots. Certain other shots are soft and there is a bit of speckling throughout, but the image is significantly cleaner than Lady Whirlwind.
Lady Whirlwind:

The Audio:
Both films are presented with either Dolby 2.0 Mandarin audio with optional English subtitles or Dolby 2.0 English dubbed audio. (The packaging erroneously states that Hapkido has been remixed as 5.1.) For both films, the Mandarin version seems preferable. That said, Lady Whirlwind's Mandarin track is far from perfect. It's a little too quiet, there's not a lot of dynamic range, and it gets a bit muffled on the high end. But, frankly, if you just turn your volume up a little more, it gets the job done. Lady Whirlwind's English track, on the other hand, is way too loud. As if to combat the general sparseness of the sound mix, the English version has been boosted so much that the music and every sound effect has a cartoonish omnipresence that can frequently overwhelm the dialogue. Also, by boosting the music and effects to this volume, there is an extremely noticeable surface hum throughout.

While Lady Whirlwind's two audio tracks are problematic in different ways, the Mandarin track is a clear winner for Hapkido. Presented at a reasonable volume, with fairly good fidelity (that high end is still a little problematic) and excellent overall presence, this track serves up all the punches, kicks, and shouts just as they should be. (Oh yeah, the dialogue sounds good too.) Hapkido's English track, however, is egregiously muffled. It sounds like you are listening to the movie from under a blanket while it plays on a television in the next room.
Lady Whirlwind Mandarin and English:

Final Thoughts:
This double-feature works as an effective teaser for the Angela Mao Ying six-film collection that is coming in June. Both of these films are action-packed fun that nicely spotlight this martial arts icon. The A/V presentation for each film is wildly different, so if for some reason you are only interested in Lady Whirlwind, this ranks as a rental-only. But, if you're considering both films together, this disc comes Recommended.