Little House on the Prairie - Season One & The Pilot Movie

Lionsgate Home Entertainment // Unrated // March 25, 2014
List Price: $38.99 [Buy now and save at Amazon]
Review by Stuart Galbraith IV | posted April 14, 2014 | E-mail the Author
Back in 1974 my mother lorded over our 19-inch color television set, and that meant that on Wednesday nights we all watched one of her favorite shows, Little House on the Prairie. Adapted from Laura Ingalls Wilder's famous series of Little House memoirs, the series became synonymous with wholesome family entertainment, and solidified the reputation of TV powerhouse Michael Landon, who not only starred as Charles "Pa" Ingalls but also produced, wrote, and frequently directed episodes (87 in all). It was a Top 20 show for most of its run, and is still fondly remembered today.

My memory of the series, partly confirmed by this season one Blu-ray set, is that the show began impressively, sticking closely to the spirit of the original books, realistically depicting harsh, often grueling and cruel pioneer life, seen through the eyes of a young girl. Later, the series became melodramatic, syrupy and maudlin, with way too much broad humor with regard to some of the supporting characters. During its first season, however, Little House on the Prairie was a superb and unique series.

After its run Little House on the Prairie was widely syndicated, and a home video label called Imavision released the series to DVD. But these syndicated and home video versions were ruinous and not reflective of the versions originally broadcast. They were very badly time-compressed; Charles Ingalls sounded like Minnie Mouse, and they appear to have been edited to boot. My wife, who adored the show while growing up in Japan (where Japanese song lyrics were added to its familiar main title theme) became downright distressed trying to watch these DVDs, and we gave up after the second episode.

Happily, Lionsgate has done an excellent job bringing Little House on the Prairie: Season One & The Pilot Movie to Blu-ray. Shot on 35mm film and correctly presented in its original 1.37:1 format, the series looks better than it did when it first aired, and episodes have been restored to their original broadcast length. Moreover, the set includes two extras, a retrospective documentary, and co-star Melissa Gilbert's original screen test. 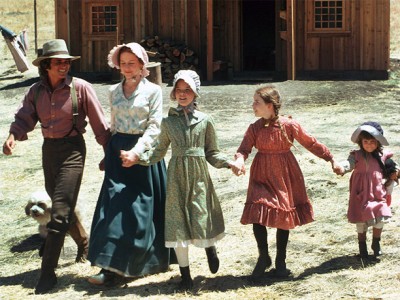 Much of the show's conflict, later to become more a source of comedy than drama, is the rivalry between Laura and the two Oleson children, Nellie (Alison Arngrim) and Willie (Jonathan Gilbert, in real-life, Melissa's adopted brother). Pompous Harriet Oleson (Katherine MacGregor), a shrew to her otherwise kindly, much put-upon husband, outrageously spoils her children.

What makes the show so compelling, at least in this first season, is its uncompromisingly honest portrait of prairie life. The Ingalls family face one life-threatening hardship after another: a plains fire; eviction from their first homestead; a hailstorm that decimates that 100-acre wheat crop, forcing Charles into dangerous work at a quarry; and Caroline nearly dies. Desperately needing money, Charles for a time works three jobs for a man (an ancestor of Walmart founder Sam Walton, perhaps?) who exploits their work agreement after Charles breaks several ribs in a fall. The winters are harsh and unforgiving, and a typhus plague, in perhaps the grimmest of all Little House on the Prairie episodes, threatens to wipe out the entire community.

One of the show's themes is that, in order to survive, the family and oftentimes the entire community of Walnut Grove must pitch and work together to solve these seemingly insurmountable and never-ending crises. The show was rather progressive in depicting not just Charles as a hard-working pillar of virtue, but also in showing how important a role women like Caroline, often subjected to backbreaking labor herself, and their children equally helped shape the American frontier.

The series sanitized certain elements from the book - the real Rev. Alden, for instance, was apparently anything but the moral center of Little House's universe, but rather a crook and a notorious liar, much hated by the Native American community in particular - but it has its share. In the pilot film, as in the book, Caroline holds racist attitudes toward Native Americans and is terrified when several pay the family an unannounced visit while Charles is away. Her views gradually soften with experience, as does her attitudes toward neighbor Mr. Edwards (Victor French), an unrefined but big-hearted character who walks many miles through waist-high snow in order to surprise the family with Christmas presents from Santa Claus. (If there was ever an Emmy award for Best Trouper, French clearly deserved one. The actor, not a stunt double, wades through an icy river in one scene.) Heretofore known for playing villains in Westerns, French quickly rejoined the cast and became a close friend and associate of Landon's, later co-starring with him on Highway to Heaven.

Landon, of course, became a star on the earlier NBC hit Bonanza (1959-73), was the guiding force behind Little House on the Prairie, and probably responsible for bringing a Western series look and sensibility to stories actually set on the Minnesotan plains. His pull with NBC, the network then at its nadir ratings-wise, helped ensure top-drawer production values.* Especially on Blu-ray and in high definition, episodes of Little House now look like mini-movies.

Finally, the series wisely never strays too far from telling its stories from Laura Ingalls's point-of-view and her frequent narration. While Grassle and Anderson were conventionally pretty, Gilbert is especially well cast because she looks like an ordinary, even slightly homely little girl, and her character's arc from normal "country girl" to observant, introspective wise child with a talent for writing is another of the show's many assets.

There had been some concern that Little House on the Prairie might be reformatted to 1.78:1 widescreen, a la Warner Home Video's Kung Fu episodes, but that's not the case. The series is presented in its original 1.37:1 standard format and look extremely good. The image is sharp and the color excellent, though I did notice that on one episode at least the color timing was completely botched. (A day-for-night scene was not corrected, and on the Blu-ray the scene appears as the broad daylight in which it was shot.) Shows are uncut and not time-compressed, and the menu screens are well designed and easy to navigate. The 2.0 mono DTS-HD Master audio is strong and 2.0 Dolby Spanish and French tracks are offered as well as English SDH subtitles. The disc is region A encoded.

"The ‘Little House' Phenomenon Part One: A Place in Television History" is a big disappointment. Predictably, and clearly with an eye on an unusually wide conservative audience, opts for painful political correctness. It deals less with the show's inception and production and instead it blathers on endlessly about its old-fashioned "family values" and (while briefly acknowledging the similar The Waltons) pointing to it as an oasis of entertainment the whole family could enjoy amidst all the real world turmoil that was 1974. Of the original cast only Melissa Gilbert and Dean Butler (who wouldn't join the cast until 1979) are interviewed. More interesting is Melissa Gilbert's original screen test, the slate revealing how quickly Little House moved from conception to pilot film to weekly series.

Perhaps the biggest compliment I can give Little House on the Prairie: Season One & Pilot Movie is that, except for those two shows on DVD, I hadn't seen it at all since 1974-75, yet most of the episodes seared by memory cells. I was surprised just how well I had remembered stories I hadn't seen in nearly 40 years, while others came rushing back early in their Act Ones. The new Blu-ray is by far the best way for first-timers to experience Little House, a DVD Talk Collector Series title.

* I recall this pull helped get Landon on The Tonight Show once to promote his phenomenally unpopular lone feature film credit as writer-director, the autobiographical Sam's Son (1984). Landon was visibly annoyed when Johnny Carson accidentally (?) referred to it as "Son of Sam."