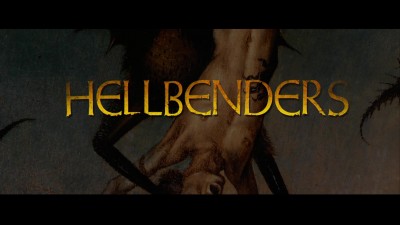 The Augustine Interfaith Order of Hellbound Saints is a select group of ordained ministers who exist to control the demons from hell that threaten our world. The premise is a bit odd but rather simple- their main job is performing exorcisms, but spend their down-time violating the Seven Deadly Sins in order to be "damnation-ready," so that if they aren't able to send demons back to hell by themselves, they can instead let the demons take them over but kill themselves at the right moment so that they both end up back in hell. I guess you'd call it a suicide mission, though if things go well enough they won't have to resort to that- being ready for it is the main thing that counts. The Order's Brooklyn Parish is comprised of Macon (Macon Blair), Erik (Dan Fogler), Stephen (Andre Royo), Elizabeth (Robyn Rikoon), Larry (Clifton Collins Jr), and Senior Deacon Angus (Clancy Brown). They live adjacent to a church where we see them committing such sins as swearing enough to warrant the movie's R rating, drinking, smoking pot, looking at porn, and doing who knows what behind closed doors. Not what you'd call extreme sinning, but I guess there were limits on what could be shown here. Stephen keeps a large book called the Sin Ledger where many sins are documented (photos from here flash by rapidly in one scene, which are rather amusing and hint at what this movie could have been.) Everyone has to keep their sinning up-to-date so that they can be worthy of going to hell when duty calls. 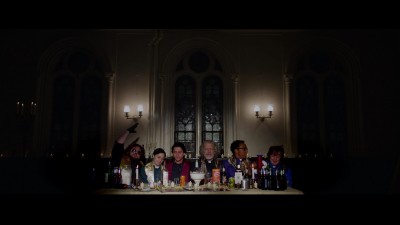 The main trouble begins when Surtr, a legendary demon, is discovered being ready to bring forth the apocalypse by opening the gates of hell on the actual birthday of Jesus Christ (which according to legend was actually in April, not during Christmas.) Surtr has spent several years in the body of a "mongoloid" child chained up in a basement, but when members of the Order are called to perform an exorcism on him, Surtr takes over Elizabeth who came prepared with a razor blade to do herself in but just can't bring herself to do it when the moment comes. Now possessed, she then disappears into the city and causes a bit of damage- which is depicted in the movie through some videos that fans had submitted through a contest sponsored by bloody-disgusting.com, where the winning videos were used here. Meanwhile, "The Church," unaware of all of this, has sent Clint LaPierre (Stephen Gevendon) out to do some inspections and tries to shut the Order down when he's disgusted at their deliberate sinning and doesn't believe the real work they do.

I found Hellbenders a bit of a mess on first viewing, but it grew on me a bit having had the chance to watch it a couple more times. I watched it one time reading the subtitles in order to clarify the explanations about Surtr- which is pronounced similar to "shirt," and a scene meant to be funny where a bystander tells Larry that Elizabeth ran off "looking for a shirt" just added to the confusion the first time. Running under 90 minutes, the movie feels a bit truncated as it just seems like a bit more should have happened, but of course this was made with a rather small budget and there's always the chance of a sequel later. Although a few of the main characters don't get enough screen time, the performances overall are hilarious, with everybody playing the ridiculous concept with a straight face. Clancy Brown's Angus, the oldest of the bunch, has a literal devil-may-care attitude and makes a few creative uses of profanity. Clifton Collins Jr brings the right balance of funny and toughness as Larry- I've been a fan of his since his appearance in 187 when he was using the name Clifton Gonzalez Gonzalez. Erik doesn't get to do a whole lot, but provides many laughs as he makes fruitless sexual advances on Elizabeth and shocks the "inspector" Clint as he casually cruises a "seduction message board" online saying that "if you insult a girl, then give her an expensive gift, she's honor-bound to let you" do anything you wish. The special effects where the demon's soul is transferred aren't really spectacular but adequate given the resources available. 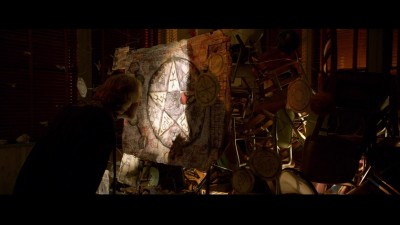 Hellbenders is presented in a 2.35 aspect ratio and shot in true 3D. Overall the 3D is very good although there are no blatant gimmick shots or effects. There are several shots giving a good sense of space between foreground objects and things behind them, including a few shots through a fence, and the special effects scenes of course benefit from the 3D. Being shot with digital equipment the picture looks as good as film but I missed the film grain that would have likely been apparent in the darker scenes- although I did notice an odd ‘criss-cross' pattern at times. I also noticed a bit of gradient banding in some dark moments as well. 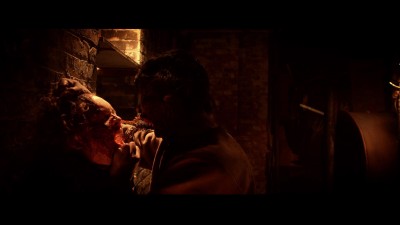 Both standard and hearing-impaired subtitles are included, along with standard Spanish subtitles. 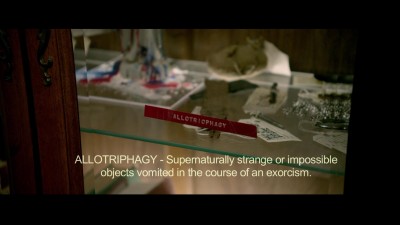 The movie includes an audio commentary with director JT Petty and actors Clancy Brown and Andre Royo. It's mainly conversational and doesn't reveal any earth-shattering details about the production but it's a fun listen. Petty makes a few comments about the 3D- during an early close-up shot of a cigarette being lit, he says "This looks amazing in 3D- if you're watching at home in 2D it's bulls***!" and also jokes that shooting in 3D on a low budget is "stupid" (although it came out very well here, and there have been 3D movies in the past with much lower budgets than this one), and that Avatar looks cheesy if you watch it in 2D. The three of them quote a few negative reviews of the movie and pretty much laugh at them, and Petty mentions that Hellbenders is really meant to be seen multiple times, as The Big Lebowski had a similar negativity upon its release but is now regarded as a classic (and having seen that in its theatrical release, I'd have to agree.)

A 24-minute making-of feature has a lot of insight from the cast and crew, and there's some "fly on the wall" behind-the-scenes footage where we see a couple scenes being shot. The winning Bloody-Disgusting.com short films are presented in their entirety (preceded by a notice that the less-than-perfect picture quality on some of them is intentional and not a defect), and the theatrical trailer for Hellbenders as well as trailers for I, Frankenstein, Warm Bodies, The Cabin in the Woods and Rapture-Palooza. The movie also begins with a DTS trailer in 3D. 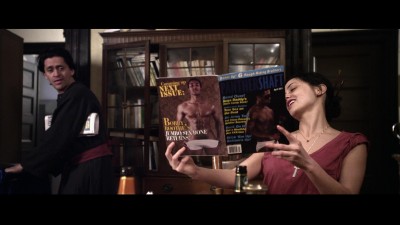 Hellbenders is one of those movies that not everyone will "get", but is sure to earn a number of fans over time. It does require multiple viewings to really appreciate, although there will likely be many who will form their opinion after seeing it only once. Although the cover displays "3D" in large print right next to the title, the 3D is more of a supporting player here than the star, but it does look very good even without showing itself off. I'd definitely like to see a sequel happen for this one.