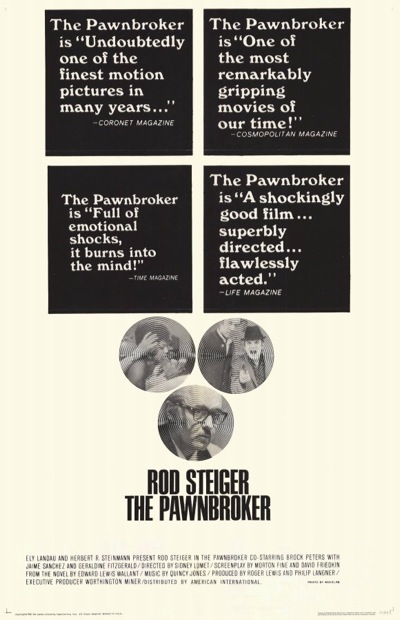 When I was in high school, I had a history teacher who was a big movie buff. He helped organize an after-school cinema club, where a dedicated pocket of burgeoning film fans would watch mostly old movies. That after-school club is where I first saw director Sidney Lumet's 1964 drama The Pawnbroker, since it was one of my history teacher's all-time favorites. I have always been pretty smart when it comes to movies, and I would love to say that I was an immediate fan of this one, but at the time, it just made me feel alternately bored and uncomfortable. Now that I am older and even smarter, the subtlety, craftsmanship, and overall excellence of The Pawnbroker no longer sails over my head.

Re-watching The Pawnbroker in the gorgeous new Blu-ray presentation from Olive Films, I don't blame my younger self for not "getting" this film. It is slow and its plot is not thick with incident. Sol Nazerman, the title character played by Rod Steiger, is a Holocaust survivor. Nazerman is suddenly bombarded by painful memories that he has long suppressed, as the twenty-fifth anniversary of the death of his wife and children in a concentration camp approaches. It's a hell of a conflict for a character, but it's an internal one that only starts to manifest outwardly in the second half of the film. For a viewer who is not completely focused on the nuances of Steiger's immersed, ultra-Method performance or the specific, eloquent details of the world that the filmmakers sketch around him, it can seem like not a lot happens in-between Nazerman's sporadic angry outbursts.

Mostly, we see Nazerman wearing a perpetual dead-eyed glare of disdain, whether he's sitting in his sterile, manicured backyard in Long Island, looking at the shallow antics of his teenaged niece and nephew, or whether he is staring down the non-stop parade of neighborhood folks who come into his Harlem pawn shop with worthless trinkets, hoping to score a big pay day. Usually, Nazerman just offers them a dollar or two. Nazerman despises the neighborhood gangster Rodriguez (Brock Peters) who uses the pawn shop as a front for his rackets, but he doesn't despise him enough to stop taking his cut. Nazerman doesn't think much of Jesus Ortiz (Jaime Sánchez), the would-be go-getter he has just hired to work with him in the pawn shop, but he tolerates Ortiz because he needs somebody to help out. Nazerman doesn't even seem to find much comfort in sharing a bed with Tessie (Marketa Kimbrell), who, like Nazerman, lost her spouse in the concentration camps. Of course, it doesn't help that Tessie's bedridden father Mendel (Baruch Lumet, the director's actual father) is constantly haranguing Nazerman for sleeping with his dead friend's wife.

A repeated visual motif shows Nazerman being fenced in. Sitting in his backyard, walking through Harlem streets to his car, even sitting behind the counter of his pawn shop: Nazerman is enclosed by fences and bars. The implication seems to be that he is imprisoned by his lack of feeling, or even that mentally he is still stuck in the concentration camp. 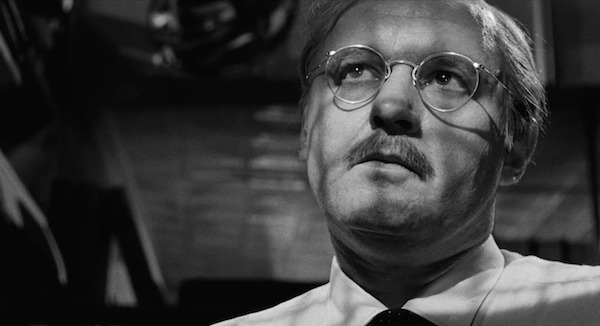 Nazerman seems like he would be happiest just being left alone. But that doesn't happen. Ortiz is constantly bugging Nazerman for lessons in business. A well-meaning do-gooder named Marilyn Birchfield (Geraldine Fitzgerald) tries to befriend Nazerman and get him out of his shell. A trio of thugs plots to rob his safe. But most threatening to Nazerman's isolation are these returning memories, which initially appear as brief, almost subliminal flashes or rapid cross-cuts with the present before they appear more vividly to Nazerman -- and to us.

Nazerman finally busts wide open when Ortiz's hooker girlfriend (Thelma Oliver) offers herself to him for some extra cash, stripping off her top and triggering the most horrible memory for Nazerman of witnessing what the Nazis had done with the women in the camp, especially his wife. This is in many ways the most infamous sequence in the film, since it was the first time that female nudity had been seen in an American film passed by the Production Code, a signal that the Code was on its way out. Seen today, the sequence still has the power to shock, mostly from its story context but admittedly also from the surprise of seeing exposed breasts in a film from this era.

Though Nazerman has his emotional breakthrough, the film doesn't present it as a gratifying catharsis. Instead, Nazerman is thrown into a tailspin of nihilism and anguish. When Rodriguez comes to the shop to get Nazerman to sign some papers, Nazerman refuses and explicitly taunts Rodriguez to kill him. The film's ending is no more uplifting. While some could read those final wrenching moments optimistically, and point out that Nazerman is finally letting the people around him impact his life, it's just as tempting to go with Pauline Kael's assessment: "...he discovers sharp suffering -- just what his armor had protected him from."

The rest of Kael's review was not complimentary, but fifty years after its original release, The Pawnbroker plays extremely well, as both a powerful psychological character study and a kind of time capsule. Steiger would initially seem to be the biggest asset of the film, turning in a bravura performance of a character a few decades older than himself, but the way Lumet captures New York at that time is just as essential to the success of the film. Seemingly influenced by his contemporaries in the French New Wave, Lumet mixes loose location shooting with almost theatrically blocked scenes on sets. Editor Ralph Rosenblum (The Producers, Annie Hall) similarly mixes up traditional cinematic rhythms with more staccato and nearly subliminal editing effects as the concentration camp flashbacks attack Nazerman. Cinematographer Boris Kaufman, who worked for Jean Vigo and Elia Kazan before his frequent team-ups with Lumet, shoots New York realistically and unsentimentally but with an undeniable beauty. Quincy Jones adds the cherry on top with a big-band jazz score that adds to the urban feel of the film.

Watching The Pawnbroker now, I better understand my history teacher's desire to screen this film to a sparsely filled room of seventeen-year-olds who barely had enough world experience to partially grasp what was going on. The film transcends the trappings of a "Holocaust movie" or "ghetto movie" or any of the other "issues" its story touches upon. It's a unique work of art. It deserves to be better known. 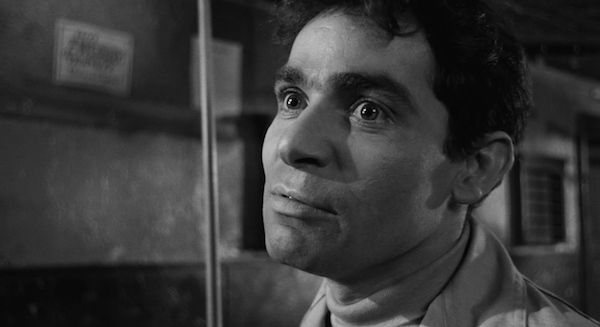 The Video:
Once again, Olive has delivered an excellent digital reproduction for this AVC-encoded 1080p 1.85:1 transfer. And fortunately, it seems that their film elements were in excellent condition this time as well. There are just some barely noticeable specks and a few moments of heavier damage amidst an otherwise pristine presentation. The contrast is excellent, with great detail both in wide shots and the dramatic close-ups. No crushing in the blacks. No added noise. Just a great looking movie. If my little bit of internet research is correct, this is also the first time that The Pawnbroker has gotten a domestic home video release in its proper widescreen aspect ratio, showing off cinematographer Boris Kaufman's work the way it was meant to be seen.

The Audio:
The DTS-HD MA mono audio is also in great shape. The dialogue, the sounds of the city, and Quincy Jones's score are all reproduced with excellent clarity. No subtitles.

Final Thoughts:
This great-looking and great-sounding presentation marks the perfect time to acquaint (or reacquaint) yourself with this forgotten classic. Highly Recommended. 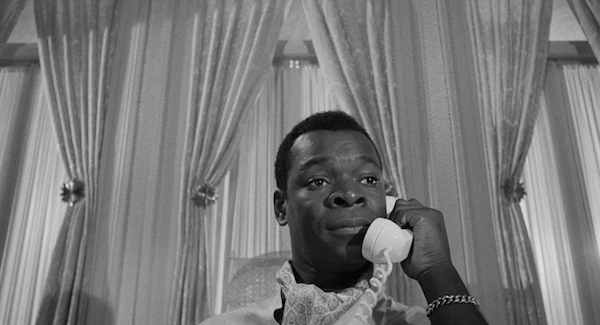