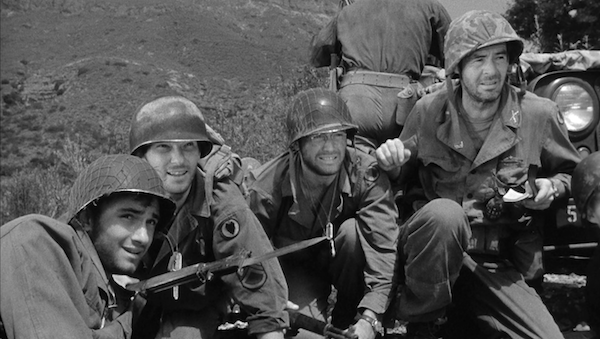 A low-budget combat drama with the intensity of a paranoid thriller, 1957's Men In War feels like a collaboration between Samuel Fuller and Alfred Hitchcock. (Actually, it was made by the folks behind God's Little Acre... but we'll get into that in a little bit.) Set during the Korean War, the film is an unsentimental tale about a single isolated American platoon's trek through enemy territory, back to the rest of their company. Much like the soldiers in Fuller's Fixed Bayonets!, there's a sense that these guys are on an impossible mission. But, for the most part, they don't abandon hope and trudge along the best that they can.

The platoon is headed by Robert Ryan's tough but even-tempered Lieutenant Benson. It is full of men with haggard, memorable faces. That's a plus for the audience, since their backstories never get hashed out and almost none of the men are given defining quirks -- unless you count one of the soldiers who obviously has a rash and can frequently be seen scratching his chest. That's not meant as a knock on the storytelling: the audience doesn't really need to delve too deeply into who these men were outside of their current predicament. Men In War is all about the present tense -- and the present is tense.

With their Jeep out of commission, the soldiers have to lug all of their supplies on their backs. Most of the men are up for it, except for Corporal Zwickley (Vic Morrow), who is out of step and recovering from some sort of trauma with the support of his friend Sergeant Killian (James Edwards, who memorably played the parking lot attendant in Kubrick's The Killing and fought in the Korean War in at least two other films).

The platoon comes upon a stray Jeep being piloted by Sergeant "Montana" Willomet (Aldo Ray). Montana is attempting to drive his beloved shell-shocked Colonel (Robert Keith, Brian's father) to safety. Lieutenant Benson is able to get the better of the high-strung Montana. He and his men commandeer the Jeep, leaving Montana and the Colonel to walk behind them. When Montana manages to kill an enemy sniper that nearly takes off the Lieutenant's head, the Lieutenant offers to let Montana and the Colonel travel within the platoon. It's an uneasy alliance, with the Lieutenant upset by Montana's seeming impetuousness and Montana unsure about the Lieutenant's gutsiness.

While there are relatively few bullets fired during the first three-quarters of the film, Men In War is never less than gripping. The Lieutenant's worn-out platoon have to avoid snipers, mines, and shell bombardments during their journey. Every tree could have an enemy soldier waiting to shoot at or pounce on them.

In one sequence that's a real nailbiter, Sergeant Killian decides to sit for a moment, to ease his tired feet. He sees some flowers and decides to pick them to put on his helmet. Meanwhile, enemy soldiers silently sneak up on him. The sequence is framed and edited so that it feels like we're watching a stalking scene out of a slasher movie. The filmmakers follow up the sequence masterfully by immediately flipping the situation: Montana puts himself in a similar set-up as bait and, as he carefully listens to the rustle of the approaching enemy, Montana is the one who is doing the stalking this time.

Director Anthony Mann, best known for tough film noirs and psychologically complicated westerns, works wonders with a budget that must have been quite a comedown from the big studio movies he had normally been making around this period. Mann had already had a lot of low-budget experience, though, and he seems to innately understand that the hook of his film won't come from eye-popping battle scenes. Instead, he sticks the audience right in the middle of the terror and confusion of the soldiers on the ground, to maximum effect.

The economical, tightly wound script is credited to Philip Yordan, but it is assumed that Yordan was acting as a front for blacklisted writer Ben Maddow. After all, Yordan was also credited as writing the following year's God's Little Acre, which had the same producer (Sidney Harmon) and director as this film -- and which has since been confirmed to have actually been written by Maddow.

Some of the other noteworthy people involved with this film include character actor and A Boy And His Dog director L.Q. Jones in an early role as Sergeant Davis and, behind the camera, Gone With The Wind cinematographer Ernest Haller. 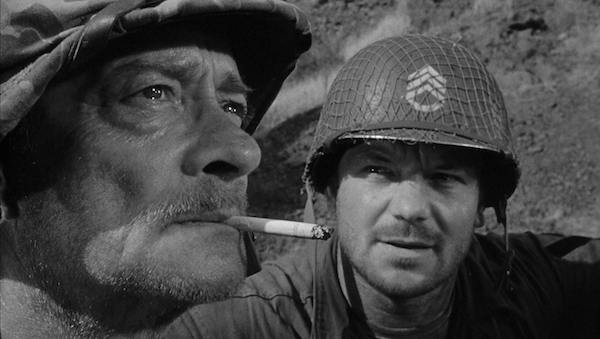 The Video:
The AVC-encoded 1080p 1.77:1 transfer is mostly a winner. There hasn't been any digital scrubbing done to the image, which means that there is a pleasing level of film grain. It also means that there is consistent speckling and occasional scratches. The first few scenes and around the last twenty minutes of the film are the most beaten-up, but the damage never completely derails the viewing experience. The clarity, contrast, and rich blacks are incredibly pleasing, even without someone Photoshopping the gunk out of each frame.

While 1.77:1 does not seem like it is the film's original aspect ratio, the image does not look improperly cropped. Different sources online claim alternately that the film was framed for 1.85:1 or for 1.37:1. My assumption here is that the film was shot open-matte 1.37:1, with the compositions created knowing the film might also be projected as 1.66:1 or 1.85:1, hence 1.77:1 looks A-OK.

The Audio:
We get a DTS-HD MA mono audio track which, like the video, has not been digitally spiffed up. That means that there is frequently an underlying hum, some crackling, and some pops, plus the high end occasionally distorts. Fortunately, these flaws do not significantly interfere with the dialogue or Elmer Bernstein's excellent score. There is a decent low-end response, meaning that the explosions and gunfire have an impressive presence for a low-budget film of this era. No subtitles.

Final Thoughts:
Anthony Mann is not a household name, but his work has been consistently gaining esteem within film buff circles over the past few decades. Men In War is an exciting, tough, and surprisingly suspenseful film that ranks as one of Mann's best. 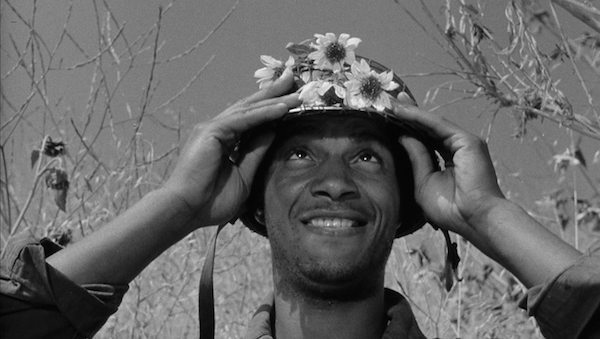