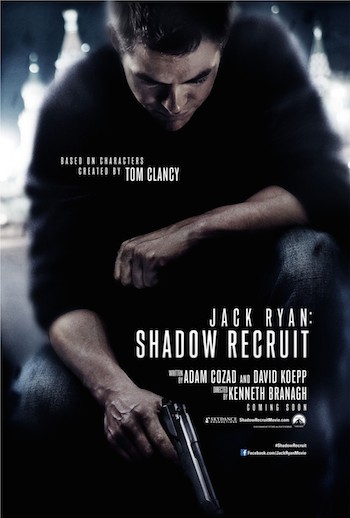 He's a likable enough guy onscreen and certainly a decent actor, but he can't seem to get cast in a role that's right for him. Sure, the guy has managed to find his way to top billing in the reboots of two major movie franchises -- and I don't fault him at all for wanting to play James Tiberius Kirk -- but I would argue that he's not a great fit for either of these established characters.

In the case of the new spy thriller Jack Ryan: Shadow Recruit, the problem is magnified by the material. Previously, Ryan has been played by actors as wildly different as Alec Baldwin, Harrison Ford, and Ben Affleck, which is partly a product of the multifaceted nature of the character, as he was conceived in Tom Clancy's original novels. Unfortunately, the makers of Shadow Recruit seem only interested in showing how the rebooted character can be a little bit Ethan Hunt, mixed with a little Jason Bourne, plus a dash of Daniel Craig-era James Bond. Rather than riffing on what makes Clancy's hero unique, they strive to make him as familiar as possible.

Updating Ryan's backstory for the new millennium, the film opens with Jack bailing on PhD studies at the London School of Economics after the September 11th terror attacks so that he can go join the Marines. While serving, he is shot down in a helicopter. During his hospitalization, he is cared for by plucky med student Cathy Muller (Keira Knightley) and scouted to join the CIA by Thomas Harper (Kevin Costner). Flash-forward ten years and Jack is now working on Wall Street as a covert CIA analyst, and he is living with Dr. Cathy. When he comes across some encrypted Russian files that he can't crack, he starts to piece together a scenario in which the Russians may be trying to collapse the dollar and ruin the U.S. economy. He is sent to Russia to foil the plan.

And that's pretty much it.

Kenneth Branagh, who recently earned his action movie stripes by directing the first Thor, does double-duty behind and in front of the camera. He fares better behind the lens this time, since his turn as the badass Russian villain Viktor Cherevin is only sporadically badass, while the action setpieces he constructs for the film are effectively thrilling. Considering Branagh's long history of directing Shakespeare adaptations, where acting is the heart of the film, it's more than a little surprising that the more basic dramatic scenes in Shadow Recruit are fairly rote and dull in comparison to the suspense and chase sequences. Amidst the entertaining action beats and unconvincing attempts at character development, the ongoing mystery of what exactly the Russians are planning is rendered pretty much moot since clues don't add up gradually throughout the story but are summarized in three or four exposition-heavy scenes that occur every twenty minutes or so.

Though the script by Adam Cozad and Mission: Impossible's David Koepp is incredibly derivative and by-the-numbers, it manages to spin some interesting variations on tried-and-true tropes. For example, though Dr. Cathy ends up following Jack to Moscow, which predictably endangers her life, circumstance leads her to become a participant in Jack's operation rather than just a damsel-in-distress who needs saving during the final act. A story thread involving a Russian sleeper cell in suburban Michigan is pretty cool too, even if it is just a gloss on The Americans.

At the center of it all is square-jawed, all-American Chris Pine, stuck playing the hyper-competent but otherwise generic everyman, who expertly manages the transition from crunching numbers to offing bad guys in a matter of hours. It's a confusing but increasingly common type of hero for modern action movies. Presumably, the character is drawn with less specific detail so that any viewer could imagine themselves filling his shoes, but it effectively renders the character -- and, by extension, the actor -- flavorless. Unsure if I was the only one who was picking up on this weird blandification of the American action star, I asked a friend what he thought of Chris Pine; he was immediately unsure if I meant the dude from Captain America or the dude from the Fast & Furious movies. (Of course, Chris Pine has starred in neither.)

It makes pretty good sense to have Pine's version of Jack Ryan mentored by America's former favorite everyman, Kevin Costner, but whenver they share the screen, one can't help feeling that they don't make 'em like they used to.

The Blu-ray
The Jack Ryan: Shadow Recruit Blu-ray comes packaged with a feature-film-only DVD and a code for a digital copy.

The Video:
Shadow Recruit was shot on 35mm film, and this AVC-encoded 1080p 2.40:1 transfer features an appealingly saturated look, complimented by a healthy layer of tight film grain. The fine detail reproduction is excellent. The colors have a lush and organic feel, although there has certainly been some digital futzing in the color-correction process, which is especially noticeable on some of the close-ups. Consequently, the image is technically correct at all times: skin-tones appear consistently accurate and the blacks are consistently rich.

The Audio:
The main mix comes as English DTS-HD MA 7.1 audio, which is 2 more channels than my home system puts out, but even at 5.1, the sound design is remarkably immersive. The early helicopter attack scene, for example, is cleverly layered and mixed to give the viewer a real you-are-there sensation. Fortunately, throughout the film, the dialogue never gets lost in the swirl of directional effects or buried under Patrick Doyle's musical score. The disc also offers French Dolby 5.1, Spanish Dolby 5.1, Portuguese Dolby 5.1, and English Descriptive 5.1 for the visually impaired. As for subtitles, the disc offers English, English SDH, French, Spanish and Portuguese.

Special Features:
All of the bonus features are exclusive to the Blu-ray release.


Final Thoughts:
A burgeoning action director and a solid cast do their best with cookie-cutter material. Rent It.