Kino // R // March 18, 2014
List Price: $24.95 [Buy now and save at Amazon]
Review by Stuart Galbraith IV | posted March 8, 2014 | E-mail the Author
Of the glut of horror movies produced during the early-1970s, director Pete Walker's were among the most sadistic, crass exploitation movies rife with gratuitous nudity and violence. The Flesh and Blood Show (1972) has plenty of the former but is surprisingly restrained in terms of the latter, and lacks the sadism prevalent in Walker-directed movies like House of Whipcord (1974) and House of Mortal Sin (1975). Indeed, by the standards of the time, it's relatively tame.

Perhaps for this reason Walker decided to distinguish this release from the competition by adding a 3-D sequence that more or less comprises the film's penultimate reel. Though certainly novel, the 3-D fad of 1952-54 being a distant memory by this time, the sequence adds nothing to the film story-wise and feels tacked on, though it is a fun addition.

The rest of the movie is in color but the 3-D sequence, filmed in the Spacemaster 3-D process and running ten minutes, is printed in black-and-white, so that the film could be exhibited in the anaglyphic red-blue process. (Anaglyph format doesn't work too well with color movies.) That process is inferior to "polarized" 3-D, but it allowed for the film to be exhibited via a single-strip print and projector, rather than the more complicated and expensive process of two interlocked projectors, the system commonly used during the 1950s.

Kino Lorber's Blu-ray of The Flesh and Blood Show commendably goes the extra mile, presenting the feature in 2-D, but with the 3-D sequence included as an extra feature and presented in that format two different ways: in its original anaglyph format (you'll need red-blue glasses, which aren't included) and reformatted for true stereoscopic viewing playable for those with 3-D Blu-ray players and 3-D televisions. 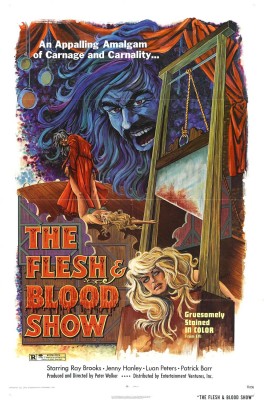 The relatively tame film, closer in spirit to Walker's later House of the Long Shadows (1982) than his other ‘70s offerings, revolves around a group of aspiring actors stalked by a madman as they rehearse an improvised musical revue at a long-closed theater located on a dilapidated amusement pier. (The movie was shot at the still-standing Brighton Dome Studio Theatre, built in 1935.)

Roommates Jane (Judy Matheson) and Carol (Luan Peters) are awoken by a knock on a door in the middle of night. Voluptuous Carol, nude (natch), answers the door only to find acquaintance John (David Howey) staggering at the door with a big knife stuck in his belly. But it's only a practical joke and, coincidentally, all three have been hired by the mysterious Theatre Group 40 for rehearsals at the long-closed Dome Theater, in a show bound for London's West End.

The still beautiful old theater has seen better days, but as it's off-season and to save money, the troupe decides to sleep at the theater as well as rehearse there. The seaside town is all but dead. At a restaurant nearby the only other customer is lonely old widower Maj. Bell (Patrick Barr).

Later, Mike finds Angela's decapitated head, her headless body resting at the foot of a nearby guillotine prop. Rather than alarm the others, he quietly goes to the police himself but returns with them in tow only to find the body replaced by a wax dummy. Curiously, precious little Grand Guignol-type violence follows, though others turn up missing and most of the young thespians suspect not-quite-right-in-the-head John is behind Angela's death, possibly one of his practical jokes gone horribly wrong.

The Flesh and Blood Show is cheap but not terrible, more a murder mystery than horror film, and not nearly as lurid as its almost ingenious title would suggest. In place of gore the film has nudity to spare: nearly the entire female cast get naked at some point, though a few are clearly body-doubled. Surprisingly, the 3-D sequence features full-frontal male nudity as well, unusual for a British horror film. (The film is preceded by a British Board of Film Censors "X" certificate, more for the horror than the nudity, while the picture was rated "R" in the U.S.)

The 3-D sequence comes 20 minutes before the end of this 96-minute film (long for a British horror film). It's intended as a flashback to explain the mysterious killings, but mostly it feels shoehorned in and is almost superfluous. Oddly, it makes almost no creative use of 3-D: the staging is unimaginative, and there's little in the way of objects jutting out at the audience. Technically, the 3-D scenes are also quite inferior to the best 3-D films of the 1950s; the photography is pretty dark and murky, and the images seem misaligned much of the time. Nonetheless, it's something different.

The Flesh and Blood Show is presented in 1.78:1 format, approximately its presumably 1.66 original theatrical aspect ratio to no ill effect. The film was reportedly mastered in HD from the original camera negative which, while a bit dirty and beat-up here and there looks quite nice overall. The 3-D sequences, included as a welcome extra feature in both true stereoscopic format (requiring a 3-D Blu-ray player and television) and in the red-blue anaglyphic process, come off about as well as the process would have looked in its original release. In other words, not great but okay. The LPCM 2.0 mono is also fine. No subtitle or alternate audio options, and the film is region coded "A."

In addition to the 3-D sequence offered two ways, the disc includes a trailer for this and other Pete Walker titles, as well as an excellent interview with Walker, in high-def, produced by Elijah Drenner.

For genre fans, this is an enjoyable if only fair early-‘70s thriller. Recommended.