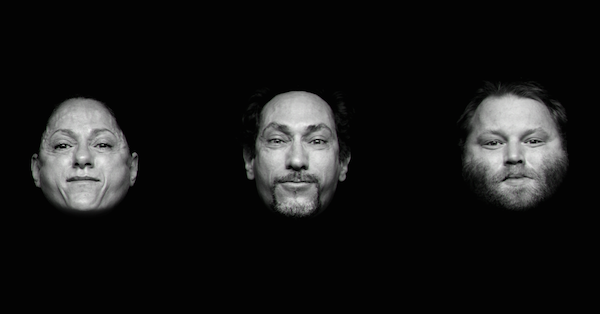 It has been 12 years since director Godfrey Reggio and composer Philip Glass completed the image-driven, dialogue-free Qatsi Trilogy. The new project Visitors finds these two collaborators working in the same mode as their prior three films, with traditional narrative being eschewed in favor of a structure based on the juxtaposition of Reggio's typically gorgeous images and Glass's hypnotic score.

Things are a little different this time, though, in ways that will probably attract certain viewers for the exact reasons they will turns off others. The sumptuous color film footage of Koyaanisqatsi and Powaqqatsi has been replaced here with incredibly sharp, digital black-and-white imagery. (For folks who were turned off by Reggio's digital manipulations in Naqoyqatsi, don't worry. There is nothing in that vein here.) The austerity and sometimes maddening repetition of Glass's earlier scores has been replaced here by (relatively) lush orchestral accompaniment. The activist impulse that motivated Reggio's earlier editing strategies -- drawing stark contrasts between the natural world and the industrial and technological entities that have encroached upon it -- has been sedated here too, even if the concerns seem to be the same.

Reggio constructs his film out of 74 shots, most of them averaging over a minute in length and almost all of them in slow motion. The majority of these shots consist of different faces -- men, women, and children -- as they stare directly into the lens, like a hyper-extended version of that old Godley & Creme music video, "Cry". The faces start off unblinking and stoic, in what could be described as the film's first "movement" (the chapter menu goes so far as to use this descriptor as well). The viewer is challenged to meet the gaze of these strangers and potentially see themselves within them; I know I found myself unconsciously stop blinking for a number of minutes, following the example of the subjects onscreen. As the film goes on, Reggio relieves the intensity of his portraiture by incorporating images of people cracking a smile, sucking their cheeks in frustration, or playing with their tongues. He stages a scene of people walking in a crowd, as if they were on a busy city street, and then uses a shallow depth-of-field in the cinematography to allow select faces to slowly come into and out of focus as they move along. He sets up subjects in a grandstand and focuses on their faces as they watch some imaginary off-camera event.

Though Reggio is clearly interested in the idea of spectatorship, he constantly interpolates other images to demolish the sense of dwelling on any one theme. People-free shots of architecture and nature provide gently pointed punctuation. The film returns again and again to time-lapse photography of monolithic buildings and disused roller coasters, sitting like statues as the clouds whip around them.

Even in this framework, Reggio can't resist commenting on technology and mankind's doomed relationship to it. Reggio presents extreme close-ups of a disembodied hand performing delicately choreographed renditions of actions familiar to any modern viewer; even without the implements visible in the frame, you can tell that the hand is clicking a mouse, zooming in on the screen of a smart phone, and typing out a text. By alienating these actions from the technology which causes them, Reggio makes these finger actions into an uncanny and surprisingly charming ballet. His touch is not always so light, as in the closing passages, which include shots of decrepit trees juxtaposed with the monuments at a cemetery, trash tumbling into a gigantic landfill, and a reproduction of the desolate surface of the moon.

Visitors -- like all of Reggio's films, really -- cannot be properly communicated through the written word. I could probably synopsize every single thing that happens onscreen in less than a page, but that won't get you any closer to understanding the viewing experience. And though Reggio obviously has some thematic ideas in mind, even he probably couldn't predict exactly what you'll feel after staring into five strangers' eyes without blinking for five minutes or so while Philip Glass's orchestral sounds surround and engulf you. Visitors doesn't feel as earth-shattering as Koyaanisqatsi, but that doesn't make the experience any less worthwhile.

The Blu-ray
Visitors comes packaged as a Blu-ray/DVD combo pack, with a pamphlet containing comments from director Godfrey Reggio.

The Video & Audio:
This is a perfect technical presentation. The AVC-encoded 1080p 2.35:1 video flawlessly captures the filmmakers' vision, with incredible inky blacks, delicately nuanced contrast, and crystal clarity that enriches the immediacy of the images. Philip Glass's score is presented as flawless DTS-HD MA 5.1 audio. The music is entrancing and the mix is enveloping. Glass frequently likes to include stings or brief bits of melody that play out simultaneously on the very high end, voiced by flutes, and the very low end, voiced by deep brass or strings, and those moments are perfectly translated here.

Special Features:
The special features can be played separately or all together.

Final Thoughts:
A truly unique film experience from the creators of The Qatsi Trilogy. Many of its images are sure to linger in the memory of viewers long after the plots of dozens of lesser movies have been forgotten. Highly Recommended.