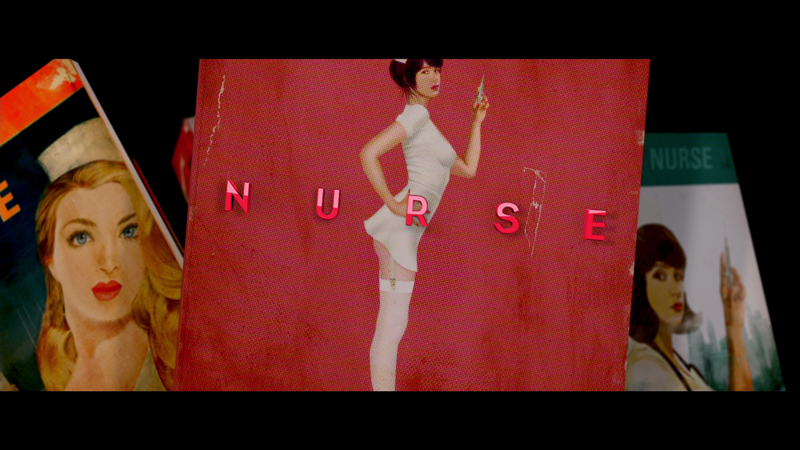 
The Movie
I will fully admit that this review will be more surface than most, but that's mainly because the reason I wanted to see it was purely visual. When Nurse first started getting attention, it was on the strength of the film's posters which include a stark black and white close-up of a woman's breast and a man's mouth about to suckle upon it, a dramatic shot of a nude Paz de la Huerta wearing a red dress of dripping blood and a beautiful pin-up of de la Huerta in her nursing uniform, riding a bloody syringe like it was a missile. That's all I needed. I figured, if this is how they promote the movie, it's going to look good and be worth my time. I probably should have known better though.

The film, which stars de la Huerta as a homicidal nurse whose M.O. is to kill lying men to protect their wives and children, does in fact look terrific. Director Douglas Aarniokoski (who served as assistant direct on a variety of big movies, including Austin Powers, Fear & Loathing in Las Vegas and From Dusk Til Dawn) has crafted a noir-influenced horror flick with the stylistic look that borrows from Dick Tracy. A retro feel combines with bright vivid colors and some intense editing to create a film that feels a bit like it's from the Zack Snyder school of filmmaking. When the blood starts flying, that look really pays off, but at times, like when some gimmicky effects start popping up, it feels like it took it a bit too far. 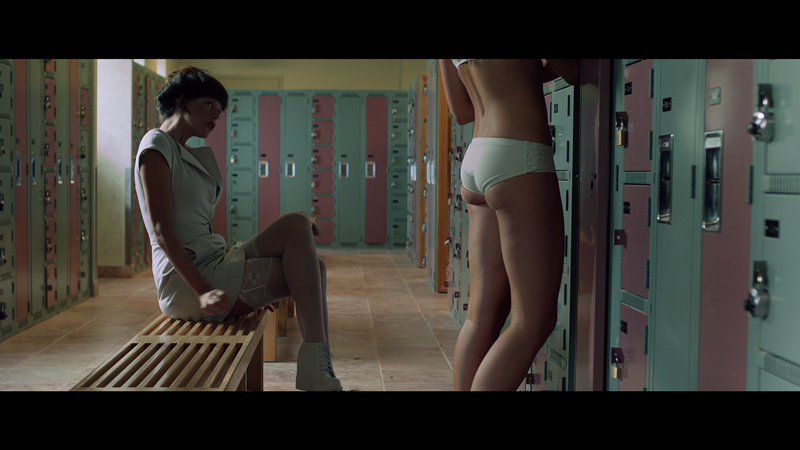 At its core, this movie is about two rather attractive women, Abby (de la Huerta) and Danni (30 Rock's Katrina Bowden, who, while working together as nurses, become fast friends, until Abby becomes obsessive. Unfortunately, Danni doesn't feel the same way, and if Abby can't have her, no one will, creating a campaign of terror and harassment for Bowden's character, causing her life to fall apart, while causing others to simply lose theirs. In it's Danni versus Abby in a fight til the end.

The problem is, that's not enough to make a movie work for a rather short 84 minutes. The revenge killings that Abby starts with are interesting, in an extremist feminist way, but that falls by the wayside once Danni's in the picture. There are some fun things done with her knowledge of medicine, not to mention her ability to manipulate guys, but eventually she morphs into too much of a supervillain to enjoy the same way, especially during the climactic battle, which is super over-the-top. On the plus side, it features one of the most memorable assault sprees I've seen in some time, with an effect that was heightened by some good choices on the part of the director.

Bowden acquits herself well in the role of the traditional blonde horror movie heroine, though if you're expecting nudity here, you're going to have to keep looking. That search will not be long though, as de la Huerta spends more time in this film naked than she wears her nurse's outfit. I've never understood the hype around her, but she is a good fit for the main role, capable of being sexy, yet off-putting, not to mention very, very creepy. I still don't understand her main appeal, as she seems to be acting, rather than inhabiting her character, but she is on those great posters, so there's that. 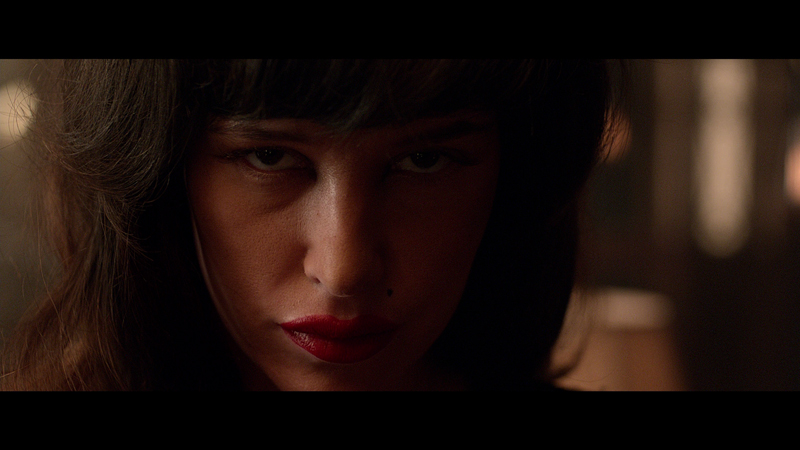 The Disc
Nurse arrives on one Blu-Ray disc in a standard Blu-ray keepcase that's wrapped in a slipcover featuring a repeat of the cover art. The disc has a simple menu design giving the choice to watch the film, select scenes, adjust the set-up and check out the special features. Audio options include are available in English, Spanish and English SDH.

The Quality
The 1080p, AVC-encoded 2.40:1 transfer looks great, which lets it present the film's visual touches in full quality, showing off all the detail in the image, while the color is appropriate and vivid (in an appropriate ratio to an overall dark movie. Helping with that are nice, deep black levels, correct fleshtones and no notable problems with digital distractions. The 3D version is a touch darker, as usual, but otherwise it looks good. The effect is used mainly for depth enhancement, but there are a number of in-your-face pop-outs (one with a scalpel that was truly horrifying to yours truly.) There were only a few moments that really make you appreciate the presence of the 3D. The only real downside to the visuals is one that hurts lots of lower-budget movies, in that the CG effects are overly obvious thanks to the clarity of the transfer.

The 5.1 DTS-HD Master Audio track is an active affair, creating a full soundfield with clear dialogue upfront, healthy atmospheric effects and an effective score in the surrounds and some decent action in the mix There's some presence in the low-end to pump up the feel in spots (like a bass-powered nightclub scene,) making the sound a solid complement to the visual presentation.

The Extras
A small assortment of bonus content to check out here, but it's all worth a peek, starting with an audio commentary by director Douglas Aarniokoski.The Sleepy Hollow helmer knows his audience, and he zeroes in on the most valuable use of a commentary and that's as an inside look at filmmaking. Aamiokoski keeps it light and entertaining but goes into detail about how the film was made, getting technical in parts, while in others talking anecdotally, especially when it comes to dealing with actors, like one who had a mind of their own on set. The writer.director never takes himself or the movie too seriously and he even quotes Wayne Gretzky (though he himself, sadly is not a hockey man.) Well done.

Up next is an 8:08 featurette, "Bad Medicine: The Making of Nurse." A mix of interviews (including the very funny Niecy Nash) and on-set footage, this piece serves as a good overview or a mini-video commentary of the movie (and as such it has a number of spoilers, so save it for later.) It's just enough for those with a casual curiosity about the film's production, and a teaser for those who want to go in-depth (which is where the commentary comes in handy.) Interestingly several participants point to the iconic blood dress poster as the thing that drew them into the cast. So why not a featurette on that?

The on-disc extras wrap with a brief (5:47) pair of intertwined video diaries by Bowden and High School Musical veteran Corbin Bleu (who plays her boyfriend in the film.) Apparently shot during production on the movie, they follow the two actors seperately, as Bowden is just doing her thing, baking and banging her head, while Bleu tries his hand (unsuccessfully) at pulling pranks in Toronto. It's a tad too cute for its own good, and barely connected to the film in any way.

A code for an Ultraviolet stream.download is also included. 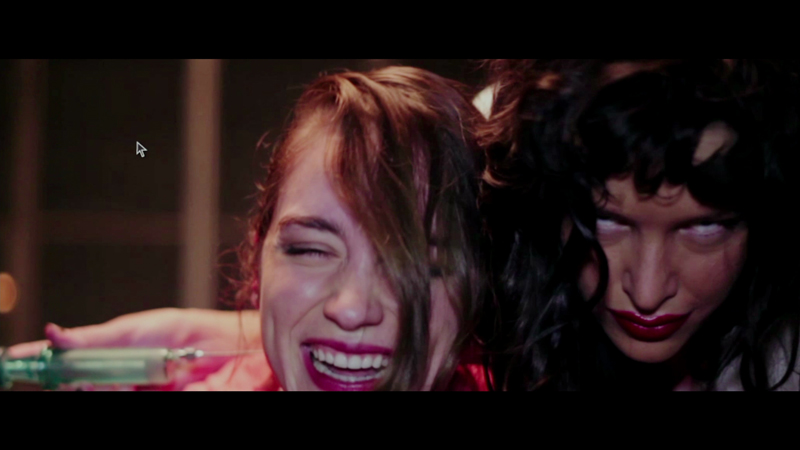 The Bottom Line
There are a lot of things about Nurse that are worth commending, but as a whole it doesn't come together, which is disappointing when you look back at the highs. The Blu-ray presentation is excellent though, and the extras are a bit better than the usual (though it's a crime that there was no focus on the posters that made people want to see this movie). For fans of cartoony, yet gore-filled horror or those who just want to see de la Huerta naked, Nurse is worth taking a look at.