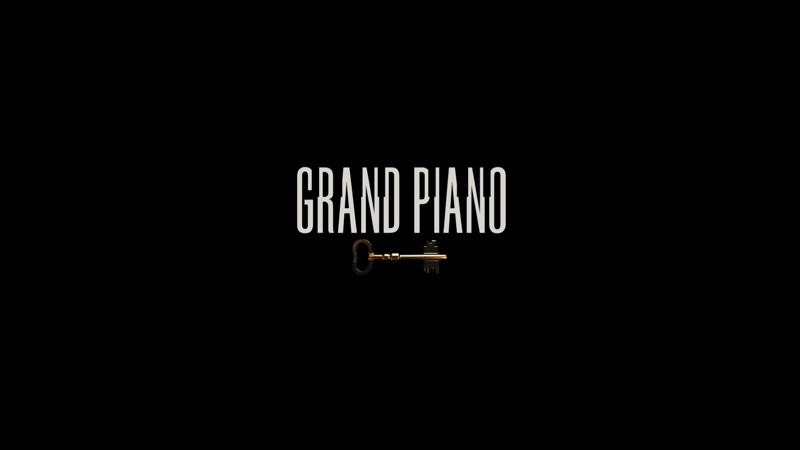 
The Movie
High-concept films are very popular because the very idea of the film is usually quite vivid and attention-grabbing.' Unfortunately, many such films lack anything worth watching outside of that concept, so when the novelty runs its course, there's not a lot left to hold your attention. With Grand Piano, the concept is so intimate, it's hard to imagine just how the film could have enough to sustain a feature film. Tom, a retired piano prodigy, battles stage fright to sit behind the keys once again, only to find a sniper has a gun aimed at him, and will kill him if he messes up a single note. How could you not want to watch that movie, especially when the pianist is played by Elijah Wood, and the sniper by John Cusack?

As directed by Spain's Eugenio Mira (helming his second English-language film following the unique, but little-seen The Birthday) Grand Piano is a very traditional thriller told with very modern style and technique, resulting in a film that is tense, almost constricting for the first two-thirds, before giving in to some very mainstream instincts that end the movie with a whimper (much like The Birthday.) Though Mira, working from a script by Damien Chazelle (of the paradoxically-titled The Last Exorcism, Part II), wrings a lot from a guy sitting at a piano, even if he cheats numerous times, by letting Wood wander more than you'd expect from a guy held at long-range gunpoint. 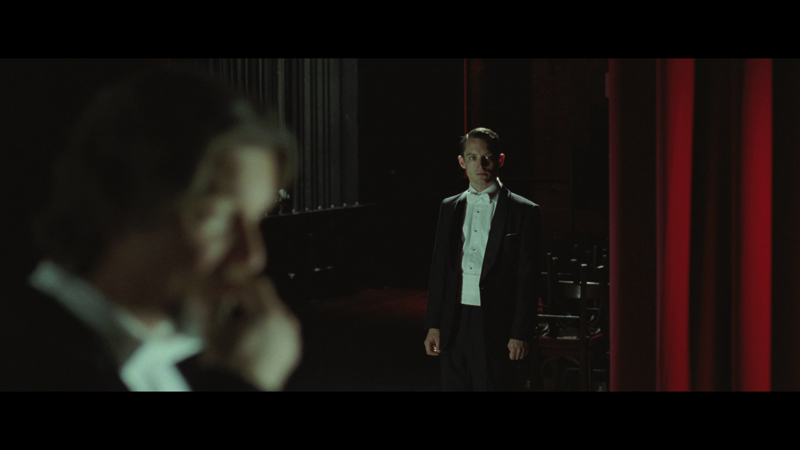 Mira is "best" known in America for his work as composer on Nacho Vigalonodo's Timecrimes, and his musical background shines through in the way the film's orchestral score powers the emotion, creating a sense of dread and raising the stakes along the way, but it's his eye for composition that really makes what could have been a rather static film into the most exciting sedentary action movie ever. If any word besides tense should be used to describe Grand Piano, it would be beautiful, as Tom and his piano get to star in a wild, yet compact noir-like marathon with some of the most lovingly-captured piano playing in cinematic history.

Meanwhile, Wood brings his ability to play stressed-out to the table in a big way. Never will you doubt that Tom is a man on the edge of a break-down, as he's never the slick hero, all soulful eyes and nervous energy. Cusack, who is always good when he's on the dark side, brings the right level of sleaze to the part, while also embodying the desperation of a man who would hold someone hostage. The rest of the film's small supporting cast, including Kerry Bishe as Tom's movie-star wife, Don McManus as his conductor friend and Alex Winter as part of the theater staff, all do a fine job with their parts as well, making for a well-acted overall film.

There are a few points where things just don't work, from an early interview that may as well come with an on-screen graphic that says "exposition," to some very obvious and dated product placement, to an obvious nod to a potential bad guy that would have been better left out to extend the mystery, to the ending, which is really where the wheels fell off. It would have been very hard to keep the film going with Wood glued to his piano bench, and so he is freed up for an action scene that is pretty hard to believe (after the movie has already asked you to suspend your disbelief often.) But then the actual ending lingers and slumps its way onto the screen in a way that is almost unbearable. It's a real shame, because up until the film dove off the deep end, it was a gorgeously-crafted serving of tension and musical spectacle that you would willingly overlook the flaws to enjoy. Maybe the third time's the charm for Mira. 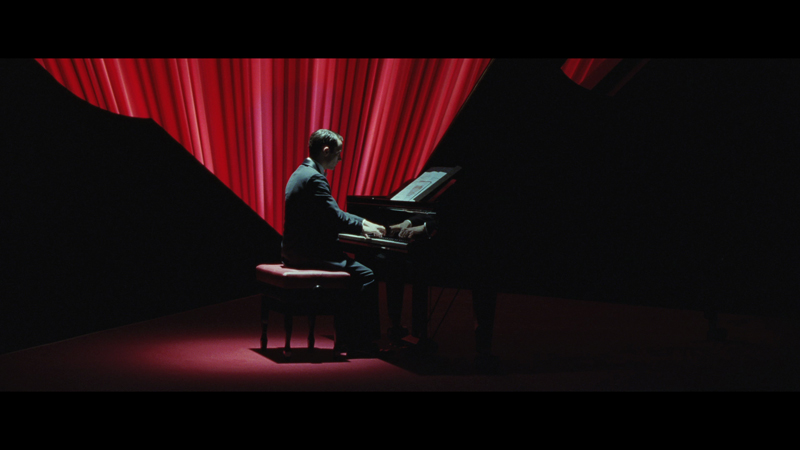 The Disc
Packed in a standard Blu-ray keepcase, the one-disc release features an animated main menu with options to watch the film, adjust languages, select scenes and check out special features. There are no audio options, but subtitles are available in English SDH and Spanish.

The Quality
The 1080P, AVC-encoded transfer on Grand Piano is very impressive, boasting a high level of fine detail (allowing you to see some fly-away hairs on Wood's head in a long shot at one point) while the colors are bright yet appropriate throughout (the red of the stage curtains is particularly rich.) Flesh tones are solid, though black levels could be deeper. On the plus side, compression artifacts are not a concern,and the film has a clean image that's free of any imperfections, while maintaining a filmic look.

The DTS-HD Master Audio 5.1 track on this disc is lively and energetic as one might expect from a movie so focused on music. The center channel is strong and clear in delivering the dialogue and some sound effects, but the star of the show is definitely the surrounds, which are boisterous, showing off an excellent dynamic mix. From an early airplane scene right through to the end, the side and rear speakers feature great directionality and panning, while the low-end brings depth to the affair. It's really a great listen, especially during the musical performances.

The Extras
For a film that received a very limited release in theaters, this Blu-ray doesn't skimp on the bonus content, starting with a 16:50 featurette, "The Making of Grand Piano." Pretty much all angles of the film's production are covered here, including the casting, the role of the composer on this film, the European producing team and much more. The only problem here, is it covers so much, that it actually ends up as something of a summation of everything that follows. It's almost like the Cliffs Notes of this discs' bonus features. Either way, it's a great look behind the scenes.

If you want to know more though, there's plenty left to enjoy, starting with a pair of individual interviews with Mira (13:58) and Wood (20:26). Mira covers a range of topics, from how he got involved to his influences to what it's like, as a trained musician, to collaborate on a movie about music, while Wood discusses working with Cusack, the experience of shooting with the director and crew, learning about playing the piano and the challenge of the role's juggling act. Both speak with enthusiasm and have plenty to say, making for a pair of engaging chats.

The soundtrack gets the spotlight next (3:28). In an all-Spanish featurette (with subtitles), Mira and composer Victor Reyes go over the planning and composition that went into Grand Piano, how the music contributes to the film's feel and the unique way the music was created. You get a real appreciation for movie music from this piece.

The 5:01 "Coaches" looks at the training that Wood and McManus received in piano and conducting, respectively, and the people responsible for teaching them, with some bonus Winter thrown in as well. Then "Stunts" spends 4:07 on the action work that Wood and Cusack do in the film (and apparently enjoy), with rehearsal footage and interviews.

"Following Eugenio" (4:56) establishes the director's quirky, light-hearted personality, as you get to see him at work on the set, and hear from cast and crew, who praise him and make jokes about him. Considering the complexity of the film, he's surprisingly laid back in this featurette.

One of the more surprising aspects of this film is the amount of CG work that was involved, and how rather seamlessly it was integrated. "Visual Effects" (3:26) allows visual effects supervisor Alex Villagrasa (who worked on all of the [REC] films) to talk about the process and show some of the work that went into building the theater and creating the digital audience of extras, There's more about the work between cameras and computers in the 4:33 "Wayne's Shot," which breaks down a complex tracking shot with animatics, interviews and on-set footage.

The last real extra is a promo for the film from AXS TV (2:52), an even smaller version of the first extra, from one of Magnet Releasing's sister companies. There's also some trailers from Magnet here. 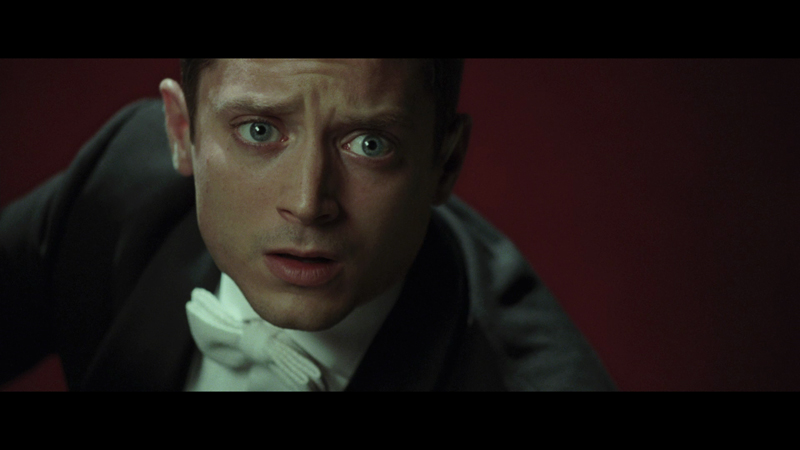 The Bottom Line
A beautifully crafted, compact little thriller that boasts some solid performances, Grand Piano's only real crime (aside from telegraphing some plot points) is lingering too long, to the point where the final third becomes ridiculous, and the last few minutes essentially pointless. It's just an example of a high-concept movie coming up a bit short on concepts. On Blu-ray, it looks and sounds great, and there's a healthy amount of extras to enjoy, covering all elements of the unique production. Though it's engaging and entertaining for the majority of its 90 minutes, it's almost as if its a film to be admired for what it accomplishes rather than enjoyed, like a grand achievement. Either way, you won't be bored.