Lionsgate Home Entertainment // Unrated // February 18, 2014
List Price: $14.98 [Buy now and save at Walmart]
Review by Francis Rizzo III | posted March 5, 2014 | E-mail the Author
In 10 Words or Less
A musical revue from one of the best ventriloquists ever 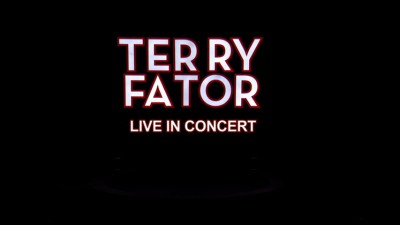 
The Movie
Back a few years, my wife and I took our toddler daughter to Lancaster, Pennsylvania for vacation. I enjoy a trip to Amish Country, but at night there's not much to do, and when you're with a little one, there's even less, so we would spend much of our evenings in our hotel room watching TV. It's was then that we became interested in America's Got Talent, since it aired a couple nights that week, and there was this impressive ventriloquist named Terry Fator. If you told me then that this variety competition discovery would, a few years later, become one of the highest-paid stars in Las Vegas, it would have been inconceivable, but it was impossible to deny his talent.

Armed with a cast of puppet characters, Fator goes beyond the norm when it comes to the art of ventriloquism. While it's a skill to be able to perform multiple voices clearly without moving your mouth, Fator is capable of singing very well, but also in a variety of voices, all without moving his mouth. It's an amazing ability, and it makes up the core of his hit Las Vegas show, Terry Fator: All Hits, No Lips, which is captured on this DVD. Moving through a series of characters, musical impersonations, songs and amusing interactions with his puppets, he breezes through a 90-minute show. He knows his audience (read: middle America) and plays to them, with a show that's alternatingly cute, emotional, slightly risque and occasionally topical. 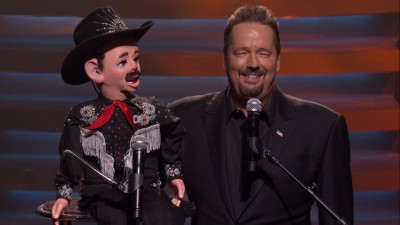 Among his puppets, which include some creepy-looking characters that would have been at home in Genesis' Spitting Image video for "Land of Confusion," he has a impersonating turtle named Winston (who serves as something of a mascot for this show); a country singer/politician named Walter; Duggie the stoner, and Emma, the little white girl with the big black voice, along with Berry Fabulous, the seemingly Hispanic, most likely homosexual puppet that lets Fator unleash his showtunes side. With brief musical interludes covering everything from Justin Bieber to the Jersey Boys, Garth Brooks to Lynyrd Skynyrd, and Etta Jame to Cher, this is honestly a show with something for everyone, and Fator's chameleon-like ability to mimic singers is fantastic, even if the interaction with the puppets, especially the way he laughs at their jokes, can be a bit over the top.

Though the snippets of songs he performs in character are great, he also performs a few songs as himself, including Michael Buble's "Feeling Good" and two of his own original numbers. This is where the show goes a touch off the rails. Fator, a native Texan, is a dyed-in-the-wool conservative, and as such, he falls prey to the need to touch on God and country, which he does through his songs "Horses in Heaven" and "Heroes," (both of which he reminds the audience are available online, with proceeds going to charity; certainly a noble endeavor.) The thing is, when you put these elements into the flow of a very silly, very fun show, so one minute you're joking about a sexy nurse (portrayed by Fator's wife Taylor), then talking about a child dying of cancer, and then playing around with a stuttering Elvis imitator who sings Aaron Neville songs, it gets a bit awkward and the good vibes are hard to maintain. That there's two such speed bumps not too far apart is probably the show's biggest problem, even if the intentions were wholly good.

Where the show hits its high point, following the more sincere segments, is when Fator invites an audience member on-stage to be transformed into a human puppet. To say much about it is to ruin it, but the effect is rather stunning. However, it's also another example of what is my main issue with this entire show. Fator's skill and talent is beyond question. No one does what he does and even if they come close, no one can match his quality. But, at least for me, it's not all that entertaining. I never found myself laughing or very into the music, even if I was constantly marveling at his skill. It's probably the curse of the cover artist/impersonator, whose main goal is to replicate the enjoyment you had when enjoying another performer. To do something more with that replica is what makes one truly entertaining. 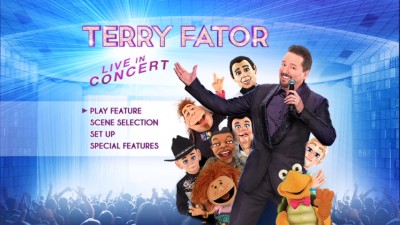 The DVD
The 96-minute special arrives on one DVD, which is packed in a standard keepcase. The DVD features a static, anamorphic widescreen menu with options to play the show, select chapters, adjust languages and check out the extras. There are no audio options, but subtitles are available in English and Spanish.

The Quality
The anamorphic widescreen transfer looks great, with good color and fleshtones, a high level of detail, that shows off the crafting that went into the puppets, and deep black levels. There are no concerns about compression artifacts or other distractions in this presentation. The only concern seems to be in the original production, as there seems to be a problem in the white balancing from camera to camera, creating an uneven look to the show.

The Dolby Digital 5.1 audio track is straightforward, putting Fator, the music and his puppets up-front and center (with the front surrounds used to present "off-stage" voices), while the audience fills out the surrounds to put you in the middle of the crowd. It's a solid presentation that helps build out the soundfield of a live event. Everything is crisp and clear, though the off-stage voices could have been louder, letting the positioning handle the gag.

The Extras
The extras start with an audio commentary featuring a surprisingly full room, including Fator, his wife/assistant Taylor Makakoa, writer Pete Mitchell, choreographer Daryl Johnson and Fator's manager Andrew Tannenbaum. Fator takes the lead here, as there's a lot of talk about the production process, techniques and the history of the puppets, as well as bit from his own background, including clashes with his prior management team. Also of interest is an MST3K connection with the show that's revealed. Surprisingly, considering her main contribution to the show is her hotness, Makakoa is quite funny on the commentary and often chimes in on what's happening (especially when the camera follows her very closely.)

A quartet of pre-show announcements (running a total of 4:44) are next, featuring Vikki (a "cougar" character who doesn't appear in this show), soul singer Julius, Berry Fabulous and Winston. These apparently are shown in the theater before the show and focus on pushing Fator's social media presence and warning the audience about recording the show. There's an attempt at humor, but it's limited.

Two sets of presidential campaign endorsements (3 minutes in total) follow, featuring several of the puppets and some of the humans in the show. One assumes these are also shown in the theater, perhaps as interstitials. They play on the Walter character's political ambitions, and are of surprisingly low quality.

"Leroy & Me" (2:56) is another original song from Fator that was apparently cut from the show, for good reason. A song about Butch Cassidy and the Sundance Kid, it's as sincere as the other two, but without the charitable payoff. It seems like something Fator may be really into, and his singing is fine, but it's just not that interesting.

The extras wrap with Fator Tots (14:53) a cartoon featuring his puppet characters drawn in limited animation. It's amusing, but not even halfway through I had lost interest. If the characters aren't that engaging when they are imbued with the magic of ventriloquism, having them just be voiced animated characters isn't likely to work.

Also included are some Lionsgate trailers and a code for a digital copy of the show. 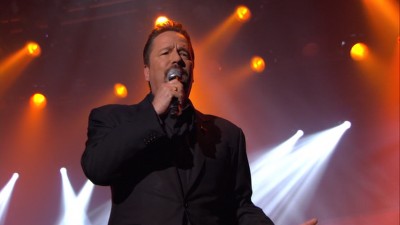 The Bottom Line
Terry Fator is an amazing singing impersonator and world-class ventriloquist, but his musical revue will speak best to the Las Vegas showroom demographic. An appreciation for his talents won't sustain itself over 90 minutes, especially with emotional landmines waiting in a few spots, but if this is your thing, it doesn't get much better. The disc does look and sound very nice, and offers a nice spread of extras, so if you enjoyed his performances on America's Got Talent or just like ventriloquists and impersonators, this is a solid package worth checking out.