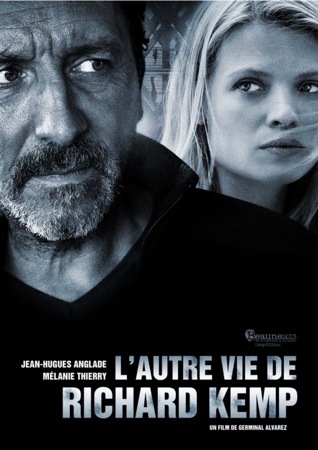 Alright, first thing's first. Back in Crime is an awful title, much worse than this film deserves. Yes, the main character travels back in time. Yes, he does so to solve a crime. But, unlike what the English title suggests, this movie is not a goofy high-concept comedy. Instead, it's a moody French serial killer procedural with a speculative fiction twist. (Of course, the original French title L'autre vie de Richard Kemp, which translates as The Other Life of Richard Kemp, suggests a drama about a man who is married to two women, or something... so let's just move on.)

The film starts out like a fairly typical cop drama. Police detective Richard Kemp (Betty Blue's Jean-Hugues Anglade) finds himself investigating a murder that is uncannily familiar. The victim was bound and gagged, then dropped in the river, but not before the killer managed to burst the victim's eardrums. This particular M.O. leads Kemp to suspect that a serial killer called the Earwig has returned after a twenty-year hiatus. Kemp was on the Earwig's trail back then, but he failed to catch the bad guy. While trying to restart a long-dead investigation, Kemp also finds himself falling in love with Hélène (Mélanie Thierry), the psychotherapist who discovered the body of the latest victim.

But then, something strange happens. Kemp sees a vaguely familiar van stranded on the side of a bridge and decides to stop and investigate. While snooping around, he is violently shoved off the bridge and into the river. When Kemp manages to drag himself to shore, he is suddenly in the past. Now there is an opportunity to catch the Earwig before he commits many of his crimes.

The film doesn't bother to create elaborate fake science or mystical mumbo-jumbo to explain what has occurred. It just happens. (Of course, if we look at these events through the lens of the original French title, it is possible to frame these unusual events as Occurrence at Owl Creek Bridge-type fantasies in the mind of a dying man -- like Kemp is creating an "other life" in his mind. Considering that the film fails to indulge in a twist ending of any kind, that reading of these events must remain simply a theory.)

Once the film gets through its sci-fi set-up, it intelligently develops its story without getting too caught up in Butterfly Effects or fish-out-of-water time-travel clichés. Sure, Kemp offers a Euro note to a bus driver, who mistakes it for foreign money. Sure, Kemp takes the time to say goodbye to his dying mother, which he failed to do the first time around. But the film steers clear of too much convoluted alternate-timeline nonsense by having old Richard Kemp decide to not bother introducing himself to young Richard Kemp.

The film also manages to muster a surprisingly affecting love story. Kemp decides he does need a confidante to whom he can explain his out-of-time existence, so he tracks down the young version of his new girlfriend, the psychotherapist Hélène. When Kemp tells her that he knows about murders that are destined to happen in the following days, she initially considers turning him in to the police. When she sees young Richard Kemp in the police station, she becomes convinced and decides to help him. As they try to track down the Earwig before he strikes again, they fall in love again for the first time.

Back in Crime (...oh, it hurts to type that title...) is a great little movie. It's well-acted and ably directed by first-timer Germinal Alvarez. The script by Alvarez and Nathalie Saugeon is smart and well-plotted without being excessively clever. Admittedly, the Earwig could have been developed into a more interesting villain, but the rest of the characters more than make up for that lack.

The Video:
Clearly going for a look in the muted vein of European procedurals like Wallander, the 2.35:1 widescreen image is not exactly eye-popping, but it's clean and boasts a good amount of detail for a standard-definition presentation. There were a few shots early in the film, where I spotted some aliasing and the theoretically straight beams of a bridge looked jagged and pixellated, but nothing else jumped out at me as being poorly compressed as the film went on.

The Audio:
The original dialogue comes in both French Dolby 5.1 surround and French Dolby 2.0 stereo mixes. There's not a lot of significant difference between these two mixes. Even though there are a few action scenes in the film, the overriding tone of the story is that of a low-key mystery and the sound design serves that style. That said, they both sound good, with no egregious distortion or anything like that. I watched the film in the original French, but I was pleasantly surprised when I watched a few scenes with the dubbed English Dolby 2.0 stereo mix. The dub is quite well-done. If you can't stand to read your movies, this English track will serve you well.

Special Features:
Just a trailer, a stills gallery, and some coming attractions.

Final Thoughts:
While Germinal Alvarez's film isn't going to change the face of cinema, it certainly deserves better than to be dumped straight to video with a title that makes it sound like a Kevin James vehicle. It's an entertaining little sleeper that deftly blends genres without too much flash. Hopefully, it will find an appreciative audience on DVD. Recommended.