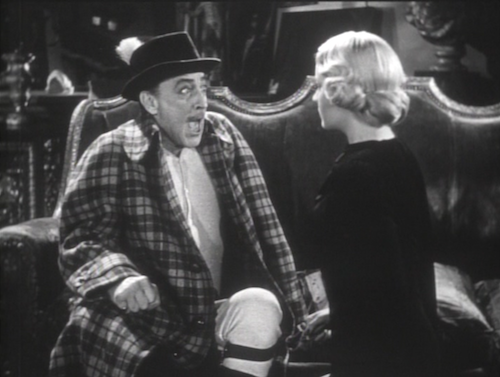 Though it is sprinkled with details from John Barrymore's later life, and it is characterized on the DVD case as "semi-autobiographical," 1940's The Great Profile is more accurately Barrymore's attempt at winking self-parody. Plus, considering its story of a ham actor who improves a mediocre script with his drunken embellishments, it is tempting to think of The Great Profile as meta-commentary on itself too.

Barrymore is Evans Garrick (just as Garrick is, no doubt, Barrymore), a past-his-prime thespian, who recently got canned from a film version of Macbeth for disappearing on a three-day drunk. With Garrick on the verge of eviction from his mansion, and his manager Mefoofsky (Gregory Ratoff) about to get his legs broken over some money he owes a bookie, it turns out to be the perfect time for would-be playwright Mary Maxwell (Anne Baxter) to show up in Garrick's bedroom with a new play. Garrick is just about to evict the home-invader when she reveals that her fiance Richard Lansing (John Payne) is well-off and will put up all the money for the play. Garrick immediately agrees to star without even reading the script, and he convinces his estranged wife Sylvia Manners (Mary Beth Hughes) to play the female lead too. He has no faith in the script, and he has little faith in his wife's acting ability, but Garrick seems interested in just keeping his world afloat a little bit longer.

Opening night does not go well. The audience is bored stiff by the arrival of the first intermission, and so is Garrick. He starts in on a bottle of whiskey, and by the time the curtain rises for Act II, he is a shambling mess. He turns the over-serious play into a burlesque and, in a plot turn that anticipates The Producers, the audience loves it. The play gets great reviews, and it starts selling out in advance.

Mefoofsky and Richard realize they have a hit on their hands, as long as they keep their star sloshed. Mary, meanwhile, is horrified that her meaningful play is being trivialized in this way. She takes it upon herself to keep Garrick away from drink throughout the rest of the play's run. Garrick plays along, hoping to turn Mary's concern into the foundation of a more intimate (you know, horizontal) relationship. Richard is meanwhile torn between his love for his fiance and his desire to have the show be a hit.

While the entire cast -- which also includes Lionel Atwill and Willie Fung -- is appealing, the aging Barrymore is the hands-down MVP of the show. His theatrical use of his voice, plus his self-consciously over-the-top facial expressions, make Barrymore a constant joy to watch -- even when the script is just ho-hum. Director Walter Lang (Desk Set, The King and I) keeps this 70-minute lark zipping along, and even though you can see most of the plot points coming from a mile way, The Great Profile leaves the impression of being a charming, somewhat silly, good time. 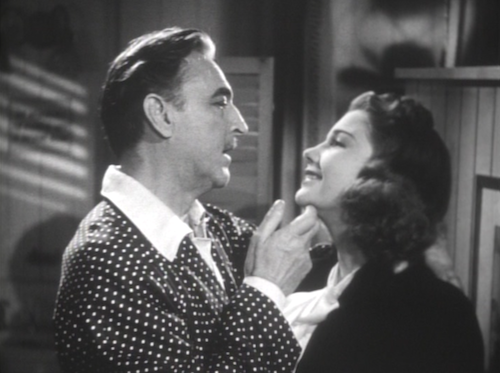 The DVD
The Great Profile comes to us via Fox Cinema Archives, the studio's imprint for manufactured-on-demand (MOD) DVD-R releases. There are no bonuses and no subtitles. The chapters are divided into 10-minute chunks.

The Video & Audio:
The caveat of most of these MOD releases is that they are made from the "best available video elements." In the case of The Great Profile, it appears the best they could cook up was an old analog video master, maybe used for TV syndication or whatever. The standard 1.33:1 image is nowhere near reference quality, but it's passable, considering the rarity of the film. The blacks are washed-out, the picture is frequently soft, and the film print used for the transfer is full of specks, scratches, and damage. The video itself also has a few notceable glitches and lines. The mono audio is also pretty beat up, with plenty of hisses and hums throughout.

Final Thoughts:
Considering the lackluster A/V presentation, I suspect this release will only appeal to fans of the actors who are interested in checking out more of their work. Barrymore is a pleasure to watch, but there are many better Barrymore films out there. Still, if you're game, this one comes mildly Recommended. 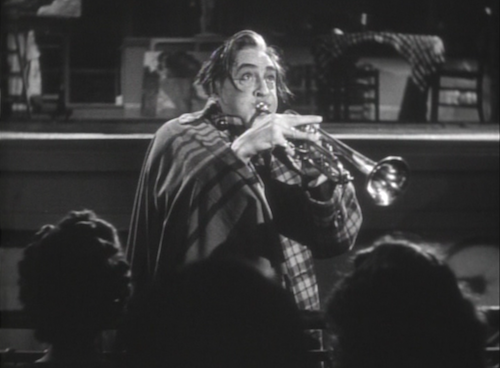