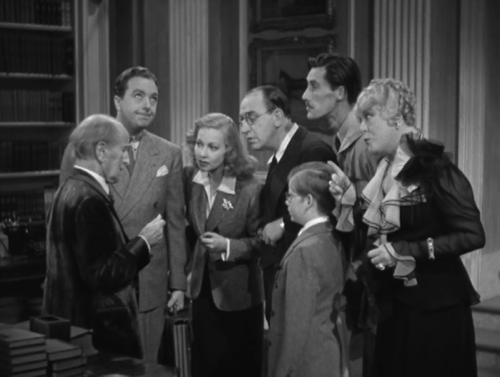 While the title Danger - Love At Work might suggest viewers are in for a prototypical sexual harassment drama, this 1937 film is actually a wacky ensemble comedy whose title comes from a brief, thrown away musical number that pops up in the movie's final third. The way the song arrives -- with no rhyme or reason, considering there are no other songs -- simultaneously points to what is enjoyable and frustrating about the film.

Danger - Love At Work is the second Hollywood feature directed by Otto Preminger, who made some all-time classic dramas (Anatomy of a Murder, Laura) and bungled more than a few comedies (Skidoo). Danger is not a total misfire, although this is thanks largely to the amusingly broad supporting cast more than anything that is happening behind the camera. Jack Haley (best known as the Tin Man from The Wizard of Oz) isn't much help as the bland leading man either.

Haley's character, Henry MacMorrow, is a lawyer, but not your standard-issue stuffed shirt. In the exposition-stuffed first scene, we learn from his partners in the firm that Henry likes to hang out in the park and feed the pigeons, instead of doing regular lawyer-y things. While it seems like we're being led to characterize Henry as a dreamer, this ends up being a bit of a red herring (more on that later). Henry's firm needs him to take on a mission that many others have failed before him: he needs to get the eccentric Pemberton family to sign power-of-attorney papers, so a Westchester sporting club can buy a random stretch of land they happen to own.

Others have failed not because the family doesn't want to sell out, but because they are so unusual. The patriarch (Etienne Girardot) is an absent-minded scientist who builds his 10-year-old prodigy son (Benny Bartlett) a life-size wind-up bear, only to have the brat complain that he had asked for a real one. The matriarch (Mary Boland, delivering many of the funniest moments) is a flibbertigibbet who is unable to keep people's identities straight. The elder son (John Carradine) is a "post-surrealist" artist who creates his masterpieces on the family's ceilings, walls, and windows. Even the help is more than a little lost -- for example, the chauffeur (Hal K. Dawson) is several hours late to pick up a guest because he went to a movie first and didn't realize it was a triple feature.

Considering the set-up we've been given that Henry has a bit of a whimsical nature himself, it would seem like he will be the perfect foil for a house full of zanies. But this is not true at all; in fact, as portrayed by Haley, Henry is just a vague everyman who also fails to wrangle these (not actually very) crazy people to sign some simple papers.

And while the movie is fairly enjoyable, one simple but fundamental question persists as it unspools: Who cares if he can't get the signatures? Supposedly his partnership at the law firm is on the line, but he'd rather feed pigeons than do his job anyway.

This sense of there being very little at stake extends to the romance of the movie as well. Ann Sothern, who plays the daughter of the family, Toni, is charming as a half-naive/half-worldly Manic Pixie in the vein of other screwball heroines like Carole Lombard in My Man Godfrey and Katharine Hepburn in Bringing Up Baby. Toni falls for Henry because he seems like a pleasant gentleman whom she presumes will be in great financial peril if he loses his job. Henry doesn't tell her the truth (that he's a trust fund kid), because that's what you do in romantic comedies. But the lie adds barely any tension to the proceedings. Other critics -- including one of my DVD Talk colleagues -- have noted that Haley and Sothern have no sexual chemistry, which makes their fondness for each other as arbitrary as anything else.

This brings me back to my original thought: the arbitrariness of Danger - Love At Work is its greatest weakness, but also its greatest asset. The movie has many laughs, which almost always stem from non sequiturs. At one moment, the artist son is seen painting, wearing a rain slicker, with a fan blowing on him and a servant sprinkling water on his head. The explanation for this is that the artist is painting a seascape, but the image is funnier than the reasoning. Later, Toni takes Henry to get a signature from Uncle Goliath (Maurice Cass), who has chosen to live as a primitive. We first see Goliath decked out in animal skins like a caveman, reading a magazine, next to a bevy of liquor decanters. Primitive living indeed.

Sometimes the randomness of the storytelling leads to telegraphed gags that fall flat. Toni takes Henry to see her two old maid aunts, Pitty and Patty. (The women are portrayed by Margaret McWade and Margaret Seddon, who played similar roles in 1936's Mr. Deeds Goes To Town and are credited on Danger's poster as "The Pixilated Sisters," based on their characters' descriptive adjective for Gary Cooper's Longfellow Deeds.) When they walk in the door, Henry notes a shotgun booby trap dangling over the entryway. Within moments, after a fairly uneventful exchange with the aunts, Henry absently pulls the cord attached to the shotgun and blasts a hole through the aunts' door. Random? Yes. Funny? No. 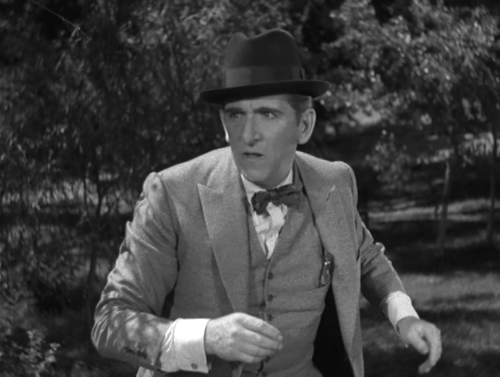 Veteran wet blanket Edward Everett Horton appears as Toni's ill-suited fiance, who tries to prove that Henry is intent on swindling the family. His sour attitude and weaselly antics make him an entertaining, if not very threatening villain. The fiance's plan to discredit Henry ends with him essentially hoisted with his own petard.

In the end, Danger - Love At Work fails at being a farcical laugh riot, but it remains consistently amusing and should satisfy viewers who don't expect too much from it. I recommend approaching it on those terms.

The DVD
This film is released as part of Fox's Cinema Archives series of manufactured-on-demand DVD-Rs. There are no bonus features, and the chapter breaks come every 10 minutes regardless of where that lands within a scene.

The Video:
Considering Fox Cinema Archives' spotty reputation, this standard 1.37:1 transfer isn't half bad. There is a decent amount of clarity and contrast, and while there is damage to the film elements from which this transfer was taken, the amount of dirt and scratches seems fairly average for an unremastered film of this age. The only major hiccup seems to be in the digital compression, which, somewhat fittingly, is a bit too pixellated, with the edges of actors and objects often looking jagged and blocky. On a standard TV or laptop, it might be not even be noticeable, but it's definitely evident on a big screen.

The Audio:
Mono audio. Not much bass. Occasionally distorted on the high end. But you can pretty much hear all the talking and music fine. No subtitles.

Final Thoughts:
If you were surfing channels, and this came up on something like TCM or Fox Movie Channel, I'd say give it a spin. Recommended. 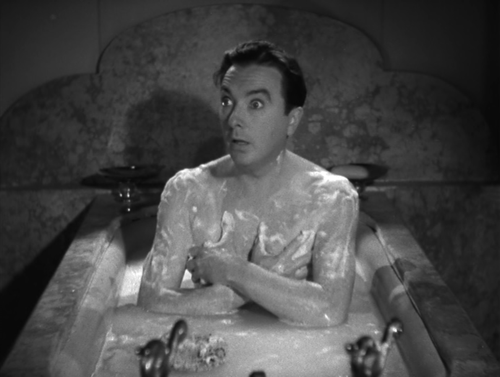