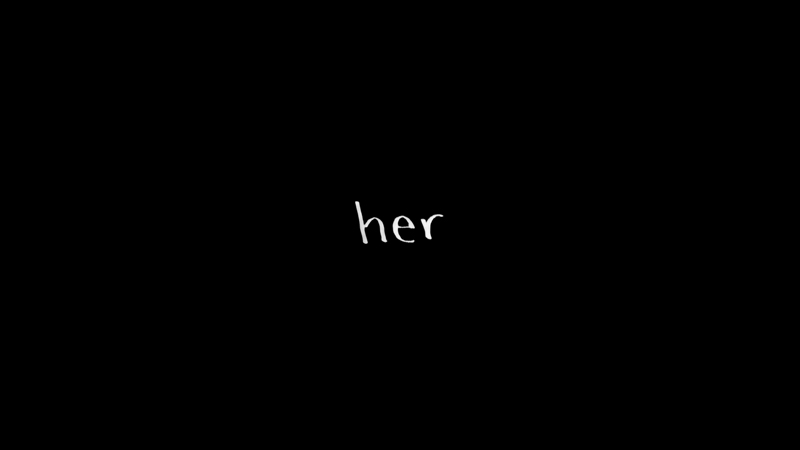 
The Movie
The marketing materials for Her no not label it as "a Spike Jonze film" or "a movie by Spike Jonze" or even "a Spike Jonze joint." It was sold as "a Spike Jonze love story," possibly the first time film marketing was 100-percent honest. The story of Theodore (Joaquin Phoenix) and Sam (Scarlett Johansson) is a beautiful love story down to its core, which, unfortunately means that's it's not all happy rainbows and hearts. Love stories, especially the best ones, often involve a high degree of pain for at least one of the participants, and Her serves up the hurt in heaping spoonfuls, in one of the most moving, thoughtful films of the past 10 years. Jonze, who served as both writer and director for the first time since his adaptation of Maurice Sendak's Where the Wild Things Are, and only the second time on a feature film, has proven himself as an insightful filmmaker who captures the idea of love on-screen like few others.

What makes Her incredibly compelling is the unique nature of Theodore and Sam's relationship, as Theodore is a frustrated, lonely artist writing heartfelt letters for others to use as their own words, while Sam is a newly-developed artificially-intelligent operating system that controls essentially all electronics in Theodore's world. Programmed to learn and grow, Sam, whose disembodied voice is ever-present in Theodore's earpiece, starts out as goofy and curious, but as she learns, and learns more about Theodore, a depressed guy whose wife (Rooney Mara) has left him, she becomes more like a person, and forms more of a bond with her owner. That bond is mutual, and soon blossoms into love between an operating system and a person. Naturally, this comes with complications, which manifest themselves throughout Theodore's life, with quite believable consequences. 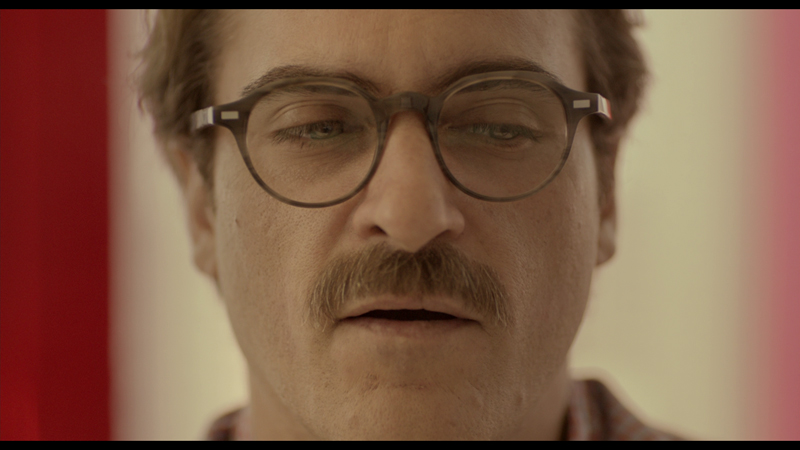 For the majority of the film, except when he's interacting with other people, like his date (Olivia Wilde) and a long-time friend and neighbor (Amy Adams), Theodore is conversing with and enjoying the company of Sam, who visually, for the most part, is not in this movie. The way that Johansson, through her voice alone, makes Sam come alive, is quite astounding, while Phoenix is once again amazing, mainly on his own in a one-person love story. It took a special actor to make this role work, especially when emotions run high, but Phoenix masters it, making a slightly sci-fi story feel achingly human. The supporting cast is all great as well, particularly the always delightful Adams, who's as earnest as Phoenix, and an enjoyably restrained Chris Pratt as Theodore's co-worker. Some familiar voices make appearances also, like Bill Hader, Kristen Wiig and Jonze himself, in a cameo I missed the first time, but enjoyed all the same.

Speaking of Jonze, his work, and that of his crew, results in a gorgeous film that is visually inventive without resorting to artistic acrobatics. Though the movie doesn't take place in our world (at least as we know it today) it only feels time-shifted, not transmogrified into some space-station vision of Earth. That goes a long way toward giving all that transpires during the course of the film legitimate impact. Chief among them is the exploration of the idea that a person could fall in love with an operating system. Certainly, giving it the voice and playful attitude of Johansson stacks the deck in favor of such feelings, but when you see how the duo become a part of each other's "lives," it's easy to accept the appeal of a friend (and lover) who is always there when you need them and who lives only for you. It's pretty easy for anyone to see themselves in Theodore's shoes, which is good and bad. 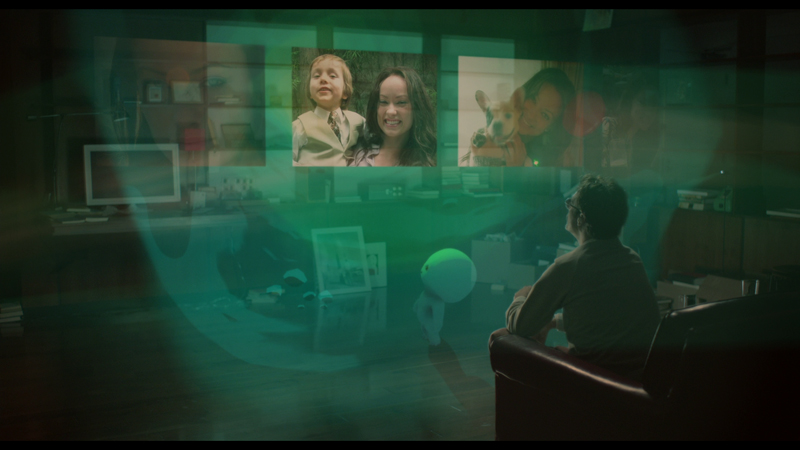 The Disc
Her arrives in a two-disc set (one BD, one DVD) inside a standard Blu-ray keepcase with a slipcover that repeats the cover art. The disc has an animated menu with options to watch the film, select scenes, adjust the set-up and check out the special features. Audio options include English DTS-HS Master Audio 5.1 and French and Spanish Dolby Digital 5.1 tracks, while subtitles are available in English SDH, French and Spanish.

The Quality
The 1080p, AVC-encoded transfer captures the film's occasionally dreamy blend of palettes beautifully, whether the scene is light or dark, thanks to appropriate black levels, excellent fleshtones and a lack of issues with compression artifacts. When sharp, the film is crisp and loaded with excellent fine details, while colors (though purposefully muted on the whole) are strong without going overboard. This movie looks great from top to bottom.

The 5.1 DTS-HD Master Audio track is far from an aggressive track, as the film is more about emotion and atmosphere, powered by light atmospheric effects and an evocative score by Arcade Fire. Dialogue up front is crisp and clean, while the surrounds mainly busy themselves with ambient sounds and music, while occasionally featuring some dynamic mixing inspired by the action in the film. For the most part though, this track is about straightforward strength and quality. Honestly, the sound integrates so well with the film that you won't even notice it as a separate element.

The Extras
Things start with an excellent featurette courtesy of the great Lance Bangs, The Untitled Rick Howard Project (24:19). This fly-on-the-wall documentary of the making of the film covers all aspects of the production, including a trip to the Arcade Fire Studio and time with Karen O to craft the film's music. This piece is wonderfully shot and edited (and even includes some of the POV pranking Jonze apparently carried over from Jackass) making it a treat to watch, with plenty of insight into Jonze's on-set style.

Up next, is another Lance Bangs production, this time the 15:10 "Her: Love in the Modern Age." This one brings together an assortment of people who have seen the recently-completed Her to talk about love and relationships. There's nothing earth-shattering about what's said here in between artistically edited clips from the film, but it features a bunch of interesting people being pretty open and real, including Wilde, Charlyne Yi, Marc Maron, Bret Easton Ellis, James Murphy and Moshe Kasher.

Wrapping things up is "How Do You Share Your Love with Somebody" (3:56), a visual essay of the making of the film, featuring clips and behind-the-scenes footage, set to a passage from the film about what love means, with music from the score. It's very pretty, but it is a bit like a cut down version of the Rick Howard Project featurette.

Also included is an Ultraviolet stream of the movie. 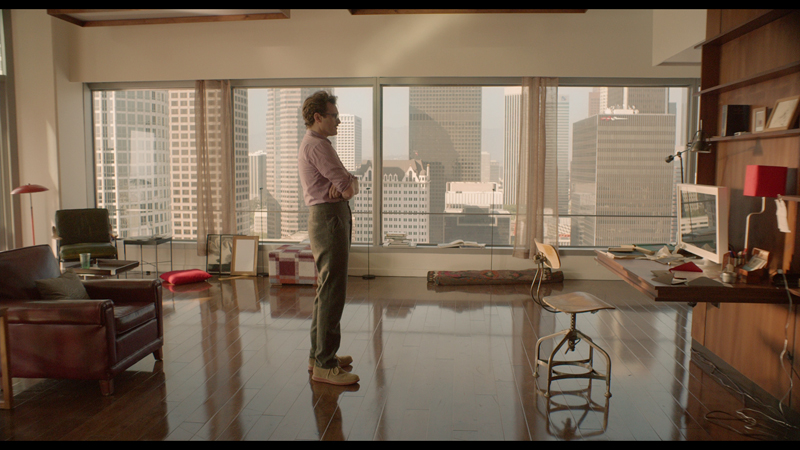 The Bottom Line
Her is an absolutely beautiful film in every sense of the word, blending a wonderful directing job with excellent performances and a heart-rending story to create something memorable and touching. On Blu-ray it looks and sounds great and offers a handful of great extras that expand the movie's theme without resorting to fluff. If you haven't seen it you owe it to yourself, and if you have it's a great opportunity to re-visit a new classic.