Not having much of an idea of what Grace Unplugged was before I saw it, I was surprised to see that it was a film with noticeable Christian themes in it, and that these themes are addressed by people of some faith. Not having as much faith as the characters or the actors portraying them, it took me back just the tiniest of bits, but nevertheless I will attempt to discuss the movie without any default prejudice that other film criticism may have.

Brad J. Silverman wrote and directed the film, which starts with a look inside a Christian family. The husband and father is Johnny (James Denton, Desperate Housewives), a former rock star who now lives with his wife Michelle (Shawnee Smith, Saw) and they raise a daughter in Grace (AJ Michalka, Super 8). The family goes to church, where Johnny sings every Sunday with Grace. Johnny's old friend and recording label executive Frank (Kevin Pollak, The Big Year) comes by and wonders if Johnny is willing to record his music again and when Johnny declines, Grace surreptitiously takes Frank up on the offer. Not only does it strain the relationship between Grace and her father, but when he suddenly moves to California, she finds herself conflicted between dreams of stardom and it compromising her values and faith. 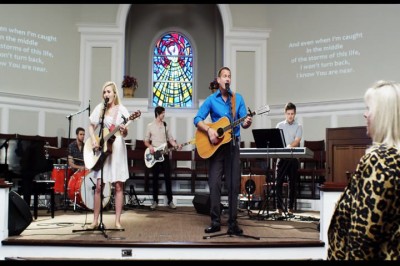 To the credit of Grace Unplugged, the larger attempt at discussing the price of stardom to a youngster is commendable, and how Grace handles her internal conflict is not bad. She comes to Cali with wide-eyed awe, allows herself to get swayed by Frank's efforts to make her a star, be in wardrobe changes, planted gossip stories or what have you, not unlike the Biebers of the world. Michalka handles these various moments for her character about as well as one could expect for her age, though there are moments where she just does not show her range, such as when her friend Quentin (Michael Welch, The Twilight Saga) discusses how she can reconcile her values, even at the cost of her stardom, and she just stands there emotionless. It is almost awkward in that sense, like someone in her first after school special or something.

This sense of incompleteness bubbles up in the story occasionally, whether it is the moments when Grace and her Dad fight (one particular yelling match is laughable), and Denton, who I had never really seen before and/or remembered, makes me wonder why it is that he is here, because he seems to have a similar lack of range. I wonder why Pollak is here, maybe he lost a bet or something, but he is better as Frank than Denton is as Johnny, who has more visibility and impact in the film, and that is not the best of things. Frank is a character that one Silverman could have easily wrote as a symbolic devil of sorts, that he is not and is a friend of the Trey family makes the decisions the story takes commendable in that regard.

While there are moments of unintentional comedy in Grace Unplugged, but there is a story in there somewhere that would be better served if it were told in a tighter fashion or another medium as it suffers from some pacing moments. Within the vacuum of a film it is perfectly average though it needs work, but considering the audience its targeting things may be somewhat different.


Grace Unplugged uses an AVC encode and is presented in 1.85:1 high-definition for your eyegrapes, with the overall result being decent. Film grain is present during much of the viewing experience without being overly dominant, colors are reproduced nicely and image detail (Denton's close-ups being notable for this) is better than expected. The film looks a little on the overly lit side and white levels are a little hot, but this is more to intent than anything else. It is decent viewing.


The film comes with a DTS HD Master Audio 5.1 surround track which is not bad to listen to. As a film with a lot of music, it is all replicated well, be in the smaller acoustics of the church where Grace and her Dad perform or in a slightly larger room of a Los Angeles nightclub. In softer, less dynamic moments, dialogue is consistent through the film with little compensation on the user's side. Channel panning is present though scarce, and there is even a hint of low end activity every so often. All in all the film sounds good.


Eight deleted scenes (12:55) do little more than restate what was said in the final cut of the movie, while a gag reel (4:54) just has the cast playing around before takes with a guy filming them being filmed. It is a little weird to describe and not all that funny. Lastly, "Own It" (10:55) is the making of the film, where the inspiration to write it is recalled, along with landing the cast for the film and how said cast came to it. The film's religious themes are touched on as well. The package also comes with a standard definition disc and a digital copy for Ultraviolet to boot.


Grace Unplugged tells a story with the best of intentions, though in execution shows some growing pains. Technically, it is a good disc, better than I was expecting in fact, and the extras are fine if unspectacular. If one finds themselves religious it may factor into deciding whether to own or rent the movie, but it is fine as a rental option regardless.